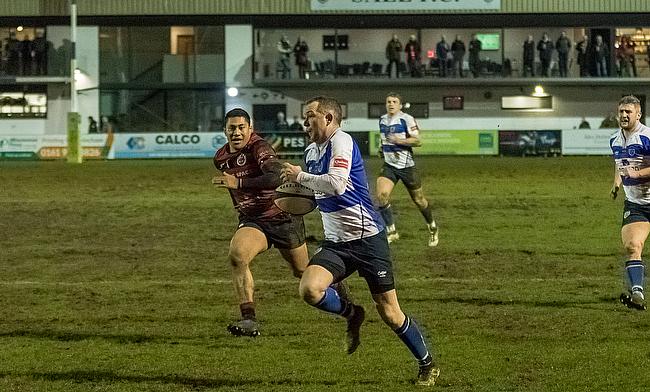 The Sale FC fly-half speaks to ncarugby.com about running 10K a day during January and why raising money for the My Name’5 Doddie Foundation is so important. Photo Credit: (Gareth Lyons)

“I am not known as the most positive guy when I play rugby as I shout a bit too much at the forwards but with this, positivity is so important!” says Chris Johnson when discussing the challenge he is undertaking.

The Sale FC fly-half is currently running 10km every day throughout January to help with the fight against motor neurone disease.

The source of Johnson’s motivation to raise money for MND charity, My Name’5 Doddie Foundation, came from the monumental efforts of Kevin Sinfield. The Rugby League legend, who raised £2.5millon, recently completed seven marathons in seven days in honour of his former teammate Rob Burrow, who was diagnosed with the cruel illness in December 2019.

“A few weeks ago, I watched the Rob Burrow interviews and all the stuff with Kevin,” Johnson continues. “I had been doing a little bit of running and I felt like I could do something at this moment while we are not playing rugby to try and raise a bit of money because charities are struggling due to Covid.

“The MND stuff touched me. Rob Burrow, Doddie Weir; they were professional sportspeople. Rob won something like eight Super League titles and he was really fit, but a couple of years later, he is in the condition he has got now. It is scary.

“I want to try and make the most of every day to try and help because what struck me was for MND, there isn’t a cure. Almost all people who have it die within two years of being diagnosed so anything I can do to try and raise a bit of money, I wanted to do. I thought why not do something like this?”

Johnson is known for being a top competitor when it comes to National League rugby. The No.10 is one of the most prolific points scorers in National Two North and National One and last year, he completed his 14th season as a player.

Striving to be the best is deeply ingrained in the 34-year-old’s mentality and he was determined to apply that philosophy to this challenge: “I did some maths! Sinfield did seven marathons in seven days which is about 182 miles. I did 5km x 31 and did some calculations and that wasn’t going to be enough. I wanted to get near the mileage that Sinfield did.

“I definitely wasn’t going to do it over seven days! I just wanted to do a decent amount of miles to try and raise as much money as possible. 10km a day is actually 192 miles in total which is a little bit further than what Sinfield did, although over 31 days!”

Johnson’s dedication has provided some inspiration to his fellow Sale FC teammates. The resilience he has shown so far has meant the former Huddersfield and Fylde player has had to shift his fundraising target from £500 to £2,000.

After witnessing Johnson pounding the pavements as early as 5am, the National One club are also taking part in their own efforts to spur their fly-half on: “Sinfield kept mentioning the money he was raising and the reason he was doing it and that was getting him through,” Johnson says.

“The first couple of runs I did, I was absolutely knacked afterwards and a lot of the lads in the WhatsApp group from Sale were messaging me and sticking the money in straight away which was great.

“What the lads at Sale FC have done, if they are running at the same time I am or they are clocking the miles they are doing, they are motivating me and putting that in our group. Everyone is out doing a lot of running and sending loads of messages.

“I get what Sinfield means. I am not raising £2.5million, but when you get people going out and supporting you like that, it does make you go out and run. You don’t want to let those guys down now!”

But the support isn’t just internal. Members of the Rugby Union and Rugby League community have helped raise the profile of Johnson’s challenge with the likes Barrie McDermott, Mike Tindall, Jim Hamilton and Lima Sopoaga all sending in messages of encouragement.

Great work @johnorugby10 make sure you also sign up for Team Exiles on @DoddieGump we need your mileage!!! https://t.co/pHme1Ye3qR

“I have been surprised by the amount of people who have got in touch,” Johnson adds. “One of the best things for me is loads of people I don’t know are putting money into the JustGiving account. I don’t have a big social media profile so the work Sale FC have done to get that message out has helped massively!”

For Johnson, he admits this challenge is out of his comfort zone. Place a kicking tee in front of him at a windy Heywood Road or Lockwood Park, and the fly-half feels right at home.

To clock up the amount of points he has accumulated during his National League career requires a strong mentality, but Johnson feels completing 192 miles of running will arguably rank as high as any personal accolade he has achieved in the game.

“Most people might not think it, but I actually enjoy playing rugby! I don’t enjoy losing, but I enjoy going to training and it is what I have been known to do. It is my life.

“Running on the other hand is not my forte! In terms of mentally, there are times when you are running and you get to 8km and you think how on earth am I going to do another 20-odd of these in the freezing cold?!

“But, you get through it and you are glad you did it. By the time day 31 one comes, I reckon my knees will be gone and my Achilles will be knacked but I will look back and I will be pretty glad I have done it.”