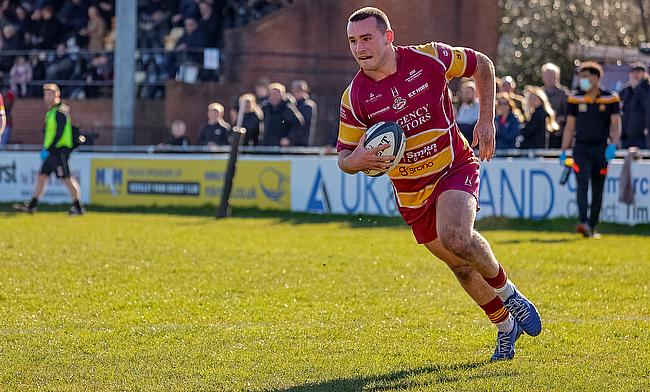 The 22-year-old broke the National Two North record for the most tries scored by a single player in a campaign and his efforts have earnt him a move to Ampthill. (Photo Credit: Gareth Lyons)

One of Sedgley Park’s final tries of the 2021/22 campaign was fittingly scored by Matt Gallagher.

There was no last day drama for The Tigers as they serenely wrapped up second place in National Two North with a comfortable 52-26 victory over Bournville and for the club’s hooker, he closed out the season in the same vein as he started it.

Gallagher began the term with a brace against Harrogate as Sedge flew out of the blocks and 35 weeks later, the front-rower was at the double again to complete the year with a record-breaking 36 tries to his name.

“It [the season’s achievements] hasn’t sunk in on a personal level,” Gallagher tells National League Rugby. “It still seems a little bit surreal. I remember near the start of the season, I think I had scored five in three games. Some of our players were joking saying ‘let’s get Galls up to 40 tries’ and I thought it was never going to happen or be anywhere close. As the season ticked on, it all sort of fell into place and the tries kept coming!”

At the beginning of last month, Gallagher went past the National Two North record of 32 tries scored by a single player in a season – a tally which was previously held by Gareth Collins (Leicester Lions), Ryan Parkinson (Macclesfield) and Nick Royle (Caldy).

No @SedgleyTigers interview this week but we couldn't leave it without mentioning hooker Matt Gallagher's super feat. He scored his 35th try of the season yesterday which beat the previous record set 40 years ago. And with one game to go!@Natleague_rugby @mattgal1 #Nat2N pic.twitter.com/UgJb3oxnb6

The 22-year-old then went on to break Sedge’s club record in the reverse fixture with Harrogate on April 30th as his 35th try of a spectacular campaign saw him surpass the total set by No.8 John Lewis in 1981/82.

And Gallagher’s performances haven’t gone unnoticed as he has been rewarded with a move to Championship outfit Ampthill for the 2022/23 campaign.

When he relocates to Bedfordshire in July, it will signal the end of five years at Sedge for the front-rower who has lit up the National Leagues this season in what can arguably be classed as a breakthrough nine months.

“Outside of rugby, my Mum [Catherine], Dad [Chris], my girlfriend Leonie, they have all been so key in the success I have had this year to get me to this point in my career,” Gallagher says. “They have driven me all over the country, helped with any sorts of fees and all that kind of stuff. Without that support, I don’t think I would ever have got to this part in my life.”

When you trawl through Gallagher’s statistics at Sedge, at first glance, it might be difficult to understand how and why the hooker was able to hit the heights he did in the 2021/22 season, but his endeavour and try-scoring exploits have transformed him from a raw prospect learning his trade at Level Four into one of the brightest talents the National Leagues has seen in recent years.

His debut came away at Huddersfield in December 2017 and it took him just four appearances to score his first try for the club against Blaydon: “I remember going up on the coach and coming on quite nervous, fresh-faced into the front-row,” laughs Gallagher as he reflects on some of the key moments during his time at Park Lane.

Back then, the former Kirkham Grammar pupil and England Counties representative was keen to make every opportunity count with a flurry of first-team appearances coming his way. In 2019/20, and under the guidance of new coach Scott Barrow, Gallagher accumulated 778 minutes in a Sedge shirt before Covid-19 struck.

Even during that curtailed campaign, he notched just three tries so how has Gallagher become the player he is today? “I think lockdown, in terms of my rugby, was probably one of the best things that could have happened in my career,” he adds.

“That sounds weird because we missed so much rugby. In that time, I think I realised how much I missed rugby so when it did eventually come back, I wasn’t just going to go back out of shape or kind of doss about so I came back probably in the best shape of my life. My fitness was 10 times better and I think that fitness is what has allowed me this season to go on and do what I have done.”

It all started at @Harrogate_Rugby in September with try number one and today in April also against @Harrogate_Rugby he @mattgal1 went over for a club record 35th try🏉 What a journey 👌🐯 pic.twitter.com/lc8aychtKv

Gallagher’s jump is nothing short of astounding and it is made even more impressive when he reveals he began his rugby journey as a centre before switching to the front row. This move into the forwards was down to targeted guidance from Sedge assistant coach and ex-Sale Sharks player Jonny Roddham.

“That switch happened at the end of my Kirkham career,” Gallagher says. “I had spoken to Jonny [who is Head of Boys’ Sport at Kirkham] about a position change. I realised I probably wasn’t fast enough to play centre after playing with guys like Arron Reed who is at Sharks now and Kieran Wilkinson. As soon as I moved to Sedgley, the move to hooker took place and I have never looked back!

“I think it [scoring tries] is something I have had to work on even though at age-grade level, it came kind of naturally because I was a centre. Just reading the game at the speed of National Two, it was a level I’d never played at before so I think it has been about reading the game at hooker, knowing where the players around me are and knowing where to fit in and get on the end of things.”

And it is a role on the pitch that Gallagher feels is evolving: “It is a good position to play, especially with the way the game is going. We are becoming a bit of a hybrid player. We are not just scrummaging and just doing the dog work anymore so I do think it is a great time to be a hooker in the game.”

Gallagher admits Sedge’s free-flowing style of rugby has suited him down to the ground and it made the transition from the backs to the forwards a much simpler process.

He attributes his development to the positional switch as well as the environments at Park Lane and at Kirkham where the expertise of Aled Trenhaile and the aforementioned Roddam lit the fire for the 22-year-old.

“I think Kirkham was probably a turning point when I started to take my rugby seriously,” Gallagher continues. “I would probably have stayed at a lower level and done rugby a bit more socially if I hadn’t of gone to Kirkham and been around those coaches and players that were in academies or going onto England U20s and things like that.

“Coming out of there and moving to Sedge and being around that environment of ‘these are players who have played high-level rugby’, it was sort of a switch flicking in my head that this is something that I do want to do moving forward.”

An appearance for Sale Jets in 2019 is another notable addition to Gallagher’s CV, the opportunity coming via his time at Manchester Met University working with Head of Rugby Rob Jones as well as former Shark Johnny Leota.

But now the 22-year-old is set to take the biggest leap in his short but promising rugby career. A call “out of the blue” from Ampthill Head Coach Paul Turner offering Gallagher a shot at the Championship was too good to turn down and the qualified teacher will be heading to Dillingham Park later this summer.

And whilst Gallagher admits he couldn’t pass up the chance to move up the rugby ladder, he reveals it is a bittersweet feeling: “National Two is a brilliant place to play rugby,” Gallagher says. “Sedgley Park as a club, I couldn’t have wished for a better place to have developed as a young player coming through.

“Some of the players at that club have just been amazing. Matt Riley, I can’t praise that man enough. He has been brilliant as a club captain and as a team captain. Bob Birtwell is another one who through the years has supported me. Ben Black, in terms of the scrummaging, has been fantastic and Connor James has to be mentioned too. He has been in every team I’ve played in since Kirkham and the connection we’ve made over the years on and off the field has been a highlight in my journey.

“It is hard to be leaving such a great club, but they understand what my goals have been so it is exciting at the same time. I think coming off the back of this season, I am full of confidence. I am ready to go. I know it is not going to be easy at Ampthill but I do look forward to getting there and seeing how I do at that level.”

So, what can fans of the Championship and Ampthill expect from Gallagher next season? “I want to say more of the same?!” he chuckles.

If that is to be the case, the second tier of rugby will contain a try-scoring machine who, through his hard work and technical development, can continue to take his game to the next level.