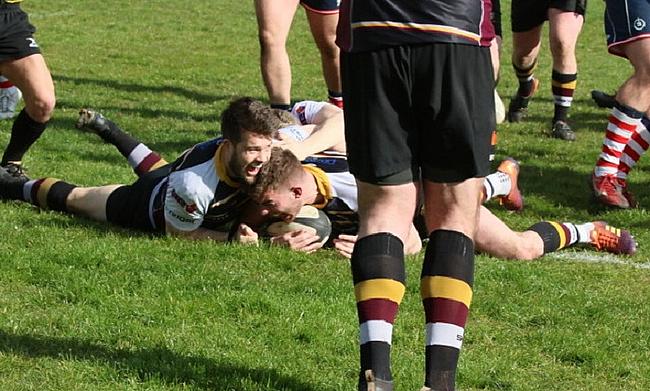 Caldy strengthened their survival hopes in National One with a brilliant bonus-point win over Rosslyn Park.

The Wirral outfit are now two points above the relegation places ahead of their final match of the season against Birmingham Moseley at the end of April.

Sticking with Moseley, they have all but confirmed their safety in National One after a narrow victory over Cambridge at Volac Park.

The Midlands club are now five points clear of the drop zone while Cambridge have fallen into the bottom three after their home defeat.

Rivals Esher are still fighting for their National One lives after an excellent win against Chinnor, but the Surrey outfit must pick up maximum points away at Blackheath on the final day to stand any chance of survival.

One team who had their fate sealed in Round 29 were Loughborough Students as a defeat against Plymouth Albion confirmed their relegation.

At the summit of the division, the title race is going to the wire as both Ampthill & District and Old Elthamians secured bonus-point wins while elsewhere, Blackheath beat Rotherham Titans and Cinderford edged past Darlington Mowden Park.

Ampthill and District brushed aside Sale FC to stay in control of the title race with just one fixture remaining in National One.

A hat-trick from Sam Baker, as well as tries from Kevin Barrett and Ollie Morris, put Ampthill in charge at the break but only after Sale’s Jack Moorhouse had opened the scoring for the afternoon.

National One League table with just one game left!

We are organising supporters coaches to see the final game at Loughborough on 27th. Maybe we’ll see you there? pic.twitter.com/tPx46UYZOQ

Josh Sharp continued Ampthill’s dominance after the restart and the fly-half managed to grab a second try with Syd Blackmore and Euan McKirdy also crossing the line.

Sale’s Kieran Dunne did go over for the visitors, but this was another professional performance from the league leaders.

The win for Ampthill means they must match or better second-placed Old Elthamians’ result on the final day of the season to seal promotion to the Championship.

Old Elthamians have taken the title race down to the wire as they came away from Bishop’s Stortford with an impressive victory in Round 29.

OEs’ Tom White, Kieran Moffat and Hamish Barton all scored in the first-half as the visitors moved into a 21-5 lead.

Joss Linney had dotted down in the first period for Stortford, but his side fell further behind when Rhys Morgan surged over.

The scoreboard then belonged to Stortford in the final quarter as Rob Duff and Nick Hankin both touched down, but OEs had done enough to secure another bonus-point win.

Blackheath moved up to third place in National One following a bonus-point victory over Rotherham Titans at Well Hall.

Mark Cooke, Leo Fielding and Steve Leonard went over for the hosts to give ‘Club’ a healthy 21-0 advantage at half-time.

Full-back Ben Ransom scored a fourth try for Blackheath after the break while Rotherham’s Henry Roberts crossed for a late consolation.

Caldy produced an excellent display against Rosslyn Park to move out of the relegation places in National One.

The hosts were trailing by five points at the interval after Jake Squirrell’s early try was cancelled out by Benji Marfo’s brace and a penalty from Greg Lound.

Caldy hit back soon after half-time as Nick Royle scooted over and the home side extended their lead to 24-15 when Rob O’Donnell dotted down.

The result for Caldy now leaves them two points clear of the drop zone and their fate is in their own hands going into the final day of the season against Birmingham Moseley.

Loughborough Students have been relegated from National One for the first time in eight seasons after Plymouth Albion came from behind to win at Brickfields.

Despite the Students leading 20-12 in the second period thanks to a double from Oskar Hirkskyji-Douglas and two penalties from Tom Ffitch, Albion were able to storm back to condemn Loughborough to the fourth tier.

Jack Arnott had opened the scoring for Plymouth, but a brace from Paul Davis and a score from Sam Daly turned the game in their favour before Dan Mugford wrapped up Albion’s victory from the tee.

Cinderford led 14-12 at the break following converted tries by Ewan Fenley and Harry Hone, with Ollie Walker and Dave Fisher going over for DMP.

Terence Barbarinsa’s try extended the lead, but back came DMP once again as Shaun McCartney crossed to level the game up.

Reuben Norville and Chris McTurk exchanged scores but the decisive moment came five minutes from the end when Hemming landed a penalty to seal the victory for Cinderford.

Esher have taken their survival fight to the last day of the National One season as the relegation-threatened side defeated Chinnor at Molesey Road.

The hosts led 29-12 at half-time with Owen Waters, George Simpson (2) and Callum Monks contributing to Esher’s advantage in the opening 40 minutes, whilst Chinnor crossed through Ben Thomas and Craig Holland.

A try from Oscar Heath did bring Chinnor back into contention at the start of the second-half, but another score from the home side via Callum Waters kept them in control.

However, a try from Craig Holland and a Caolan Ryan penalty reduced Esher’s lead to just five points, but Tom Williams’ men held out for a crucial win.

Esher are now five points adrift of safety so only a bonus-point victory away at Blackheath will give them a chance of avoiding relegation on the final day.

Birmingham Moseley clinched a potentially vital win against Cambridge as both teams battle to avoid relegation from National One.

Moseley surged into a 19-0 lead as Aedan Moloney, James Williams and Rob Lewis all crossed, but Cambridge hit back as Gillian Benoy darted over.

Thanks to all the @camrufc supporters for today, apologies we didn’t get over the line. Players and management feeling as disappointed as anyone. Well done to @MoseleyRugbyFC for the win. 1 more chance left #bloodandsand

Alex Rayment’s powerful effort gave the Blood and Sand the perfect start to the second half, but Williams knocked over a penalty to keep Moseley in front.

Cambridge continued to fight and Jake McCloud’s try set up a grandstand finale at Volac Park, but Moseley held on to take a huge step towards survival.

The Midlands club are now five points clear of the drop whilst defeat for Cambridge means they have slipped into the bottom three and Richie Williams’ side are now two points from safety, with a trip to Sale FC to come in Round 30.