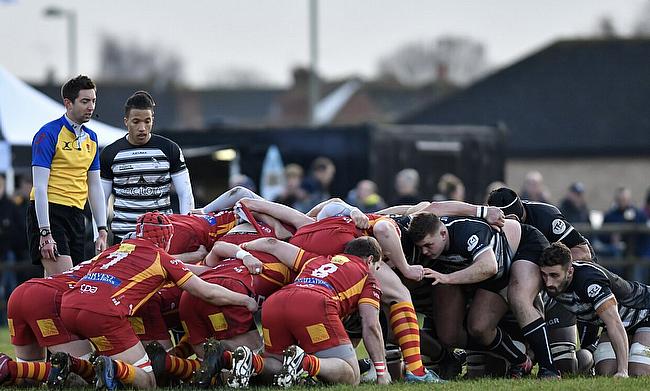 And just like that, the 2019/20 National League campaign has reached its halfway mark. Photo Credit: (Simon Cooper)

Three months have flown by, but the drama, excitement and thrilling action has not wavered as the first half of the season comes to a conclusion.

This is very evident when taking a quick glance at the National One table as the top five head into the penultimate fixtures before the Christmas break separated by just five points.

This weekend, Rosslyn Park will be keen to stay in pole position when they travel to Cinderford whilst Chinnor and Darlington Mowden Park’s clash at Kingsey Road also has an impact on title aspirations.

In National Two North and South, the fight for survival is really starting to take shape with Huddersfield’s trip to Luctonians and Barnes’ fixture against Westcliff under the microscope.

Below is a more in-depth preview ahead of Round 15’s action from across all three leagues.

We are at the halfway point of the National League season and the title race in the third tier of English rugby could not be closer. Rosslyn Park currently sit on top of the pile and they can stay in pole position this weekend if they can get a result against Cinderford. After a loss to Rams in Round 13, Kieran Power’s side looked back to their best when they hosted Bishop’s Stortford last time out and with the top five separated by just five points, the margin for error is minimal at the summit.

In terms of Cinderford, they missed the chance to edge themselves further into the battle for promotion after falling to a surprise loss against bottom of the table Canterbury last weekend. Paul Morris’ side were beaten 19-17 in Kent and they now sit eight points off the top with a game in hand. The Foresters can reignite their challenge, and add another dimension to the title race, if they can topple Rosslyn Park on Saturday afternoon.

Usually we like to highlight the second-placed side in National One considering how hotly contested the title race has been up to this point, but two clubs who are now firmly in the running for pole position are Chinnor and Darlington Mowden Park and the pair clash at Kingsey Road in Round 15. Chinnor’s form has been very strong over the last month and a six-match unbeaten run has guided Matt Williams’ men into the battle for top spot.

Chinnor are five points behind Rosslyn Park and DMP also find themselves in the same situation following four games without a defeat. Danny Brown’s side have scored 100 points in their last two fixtures, but the injury sustained to flying winger Morgan Passman in last week’s win over Blackheath will have been a blow to the North-East outfit. However, they still displayed their clinical edge against ‘Club’ and they will be hoping for more of the same in Oxfordshire this weekend.

He played at English rugby's top table for half a decade, but now @carlkirwan_7 has his sights set on helping Chinnor achieve their ambitions in #Nat1.

Arguably, the standout result in National One last weekend involved bottom of the table Canterbury as they finally broke their duck in this division. Andy Pratt’s side gained promotion to the third tier for the first time in the club’s history back in May and prior to Round 14, life at this level had been a chastening experience for the City Men.

However, Canterbury’s run of 13 straight defeats came to halt as they beat Cinderford and now the Kent outfit have a chance to add another spark to their possible revival when they visit fellow strugglers Rotherham Titans. The Yorkshire outfit are without a victory in their last seven matches and Martin Jenkinson’s side haven’t won at Clifton Lane since the end of September. As things stand, Rotherham are 12 points from safety so a welcome triumph on Saturday would certainly boost their survival hopes heading into the second half of the season.

Fellow relegation rivals Hull Ionians also have an opportunity to reduce the gap between themselves and the safety positions when they take on Cambridge at home whilst 12th placed Birmingham Moseley visit title-chasing Richmond at the Athletic Ground.

It has been a constant flow of victories for Caldy so far this term and 13 straight wins has ensured Gareth Davies’ side are in control of the race for promotion. The Wirral outfit have been relentless in their pursuit of an immediate return to National One and as they prepare to host Stourbridge this weekend, Caldy sit four points clear at the summit.

Stourbridge are the final side to take on the league leaders before the second half of the season gets underway and the Midlands club travel to Cheshire currently in ninth place. Neil Mitchell’s side have lost their last three fixtures, but a spirited fightback after a nightmare opening half an hour against Chester in Round 14 may give Stour something to work with this weekend as they go in search of their first away win since the end of September.

In recent weeks, the battle for survival has begun to catch the eye and as the first half of the campaign draws to a close, the big games at the bottom are starting to look more significant. Last Saturday, Huddersfield picked up an excellent 25-19 win over Loughborough Students to move out of the drop zone and Gareth Lewis’ side face another massive fixture this weekend as they look to continue moving away from danger.

The Yorkshire club are two points clear of the bottom three and currently occupying a relegation spot are Luctionians, who host Field in Round 15. Back-to-back wins over Scunthorpe and Preston Grasshoppers ignited their campaign, but a disappointing loss to Wharfedale last time out saw Ryan Watkins’ side slip into 14th place. However, the Lucs have a golden opportunity to hit back immediately and having picked up 10 points in their last five home matches, they are more than capable of adding to that total this weekend.

Fellow relegation rivals Preston Grasshoppers also face another important clash on Saturday as Paul Arnold’s men look to halt their slide. The Lancashire club are currently eight points from safety and they find themselves in this predicament following six straight defeats. Hoppers are now targeting that ‘one good win’ to kick-start their season and this weekend, they travel to Otley.

The hosts returned to winning ways in style in Round 14 as they ran riot against Scunthorpe and it was a much-needed victory for Otley following three straight defeats. Charlie Maunder and Tom Casson’s men are now seven points clear of danger so a positive result on Saturday would certainly guide them further away from any relegation trouble.

Elsewhere in National Two North this weekend, second-placed Fylde travel to Sheffield Tigers whilst Sedgley Park will be looking to get their top two hopes back on track at home to Scunthorpe. Also in Round 15, Loughborough Students entertain Tynedale, two in-form teams clash when Chester take on Hinckley and Hull face Wharfedale in an all-Yorkshire affair.

Tonbridge Juddians have strung together three wins in a row after a few weeks of teams swapping and changing positions at the summit of National Two South. Peter Dankert’s side have done well to find some consistency and TJs are currently two points clear at the summit after a very satisfying victory over Dings Crusaders last time.

Only three points separates the top three in National Two South so TJ’s will be aware if they do put a foot wrong against Bury St Edmunds, they could well be punished. Their upcoming clash in Suffolk won’t be straightforward either as the Wolfpack enter Round 15 having not lost a home fixture all season. Bury also lost narrowly to promotion-chasing Henley Hawks last weekend so it shows they have all the tools to cause the table toppers problems this weekend.

Clifton will be keen to see clubs such as Tonbridge Juddians drop points in the lead up to Christmas as the Lavender and Blacks look to stay in touch with the top two. A last-gasp defeat at home to Redruth last time out means Matt Salter’s side are now seven points behind second-placed Henley and if they are to keep the likes of the Hawks and TJs in their sights, a positive result away at Esher might be necessary.

For Esher, their own promotion hopes are slowly starting to fade further into the background. Peter Winterbottom’s men looked like they were in a strong position to challenge for an immediate return to National One heading into November, but just one win from their last five games has dented their chances. The Surrey based-club suffered a surprise loss against Westcliff last weekend and now they are 15 points off Henley so a win at Molesey Road is a must if a top two finish is still the ambition.

The aforementioned Westcliff claimed one of the results of the weekend in Round 14 as the club unveiled their new clubhouse in the perfect way possible with a win over Esher. Peter Mahoney and Jacob Ford’s side are now out of the relegation zone following their third win of the campaign and they could increase the one-point gap between themselves and the drop with a positive result over Barnes this weekend.

The hosts on Saturday also come into this season on the back off an excellent result away at Old Albanian. Victory for the London-based club leaves them three points above the trapdoor so the incentive for both sides in Round 15 is to ease any relegation fears before we head into the festive break. Who will come out on top in the capital?