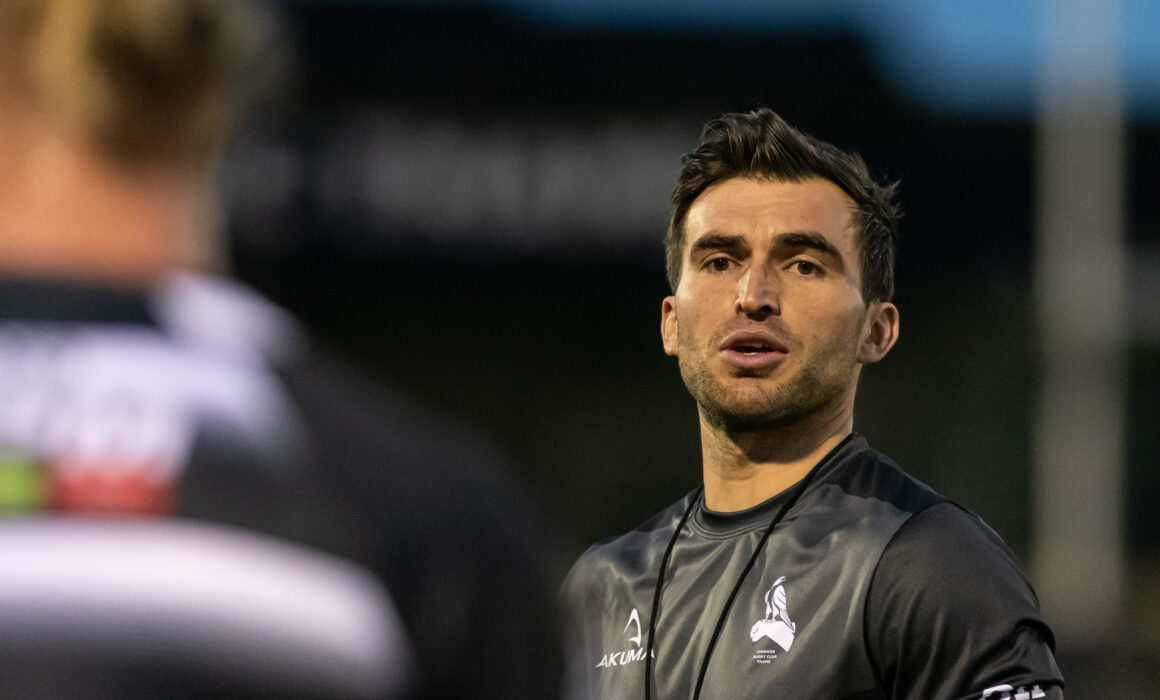 With the start of the new National League Rugby season in September, Chinnor RFC head coach Craig Hampson spoke about his team and how they are preparing for their return to league action.

Craig Hampson joined Chinnor just over a year ago, the Ealing Trailfinders scrum-half originally making the journey to Kingsey Road in the guise of attack coach before stepping up as head coach at the turn of the new year.

Working closely with the club’s Director of Rugby Richard Thorpe, and forwards coach Soane Tonga’uiha, Hampson has had the task of getting a squad ready for a return to competitive action after 18 months in the shadows.

Playing Esher twice and Rams once in May under the revised law variations,  Chinnor won just one of those encounters. Now, with more players having joined the cause in Thame, the National One side are looking to build on their fourth-place finish in the 2019/20 season.

Due to the time between competitive fixtures and the turnover in playing personnel, the coaching staff have created a largely player-led environment in order to get the most out of the group for at least the upcoming campaign.

“It is brilliant, to be honest,” Hampson said. “There are only so many conditioning games that you can play, especially in that other format. It was mainly about keeping the boys fit and maintaining skill level.

“Now, we have brought in those guys who we knew were coming, but weren’t training with us at the time. Those guys who have been playing in the Championship or Premiership, to get them leading the stuff we are doing, and it has been great.

“We are trying to build a culture. With it being a very new team, we are doing it all with the playing squad leading it. They all voted for who they thought should be in the senior playing group, which I think has worked really well and something I feel as though other teams should do so things are not just being implemented by players.

“They voted for their peers and after that, we have given them a bit of guidance, but they have come up with their values so that everybody buys in. I think we are starting to get real buy-in and it is just great to be in a proper club environment to start building towards this season.

“We just knew that we were going to have some good players in there and you get way more buy-in when it comes from the players. There is no point me standing at the front and telling them what I want us to play like because as a group, we have to look at what our strengths are.

“With it being a fairly new group, we are trying to create a lot of opportunities for them to spend time together and get to know each other better. For them to choose who the leaders are, they have automatically bought into what those leaders are going to say because they have chosen them.”

Competing in what will be just the club’s third season in National One, Chinnor have recruited the likes of Dean Hammond (Worcester Warriors and Ealing Trailfinders), Ben Glynn (Bristol, Harlequins, Ospreys and Northampton Saints), Fred Tuilagi (Leicester Tigers) and Max Clementson (Hartpury RFC) who have represented teams in higher competition.

The Black and Whites have also welcomed back  Sam Yawayawa, Willie Ryan, Jason Worrall and Greg Goodfellow, whilst Ben Wilkinson has been promoted to the first team after joining the club at U6 level, a quarter of the team’s squad being made up of homegrown players.

With three more emerging players from Ealing also joining the cause as dual-registered signings, there is plenty of optimism surrounding the side.

“All the guys have been brilliant since they have come in,” Hampson said. “Ben Manning has been brilliant in this leadership role and then it is also about growing those guys as leaders because we want it to be player-led, but if you don’t have the leaders to do that, it is not going to happen.

“Helping those guys become leaders has been great and those players coming back have got a lot to offer. They set really high standards for the group and I think there will hopefully be a few more guys coming in.”

In preparation for the new season, Chinnor will be taking on Camarthen RFC and fellow National One side Blackheath before their season opener against Sale FC on September 4th.

3⃣ Senior Squad friendlies are locked in for this month 💪

Like so many other clubs, it has been a long wait to get back to competitive play. For Hampson, he will be combining his coaching commitments with the upcoming Championship season.

Looking to gain promotion to the Gallagher Premiership with Ealing, matchday responsibilities will largely fall to Thorpe, Tonga’uiha and former Chinnor player, Dan Harris, who acts as an assistant coach.

Already, there are two less games on the calendar with Old Elthamians pulling out of competing this year but even without the Mottingham-based club, it is set to be another competitive season with Chinnor one of a number of sides hoping to vie for promotion to the second tier.

“It is pretty daunting as well to be fair,” Hampson laughed. “We’ve had all this time training, we are now just trying to layer in the match-level detail because we know how we want to play. We know our structure and it is now just the final detail of kick-offs, lineout defence plays and attacking plays.

“I think everyone is getting really excited. You can just tell from the level of contact in training. I don’t make the boys do a lot of smash, but when they go shoulders on, you can tell people are hungry and want to get that shirt.