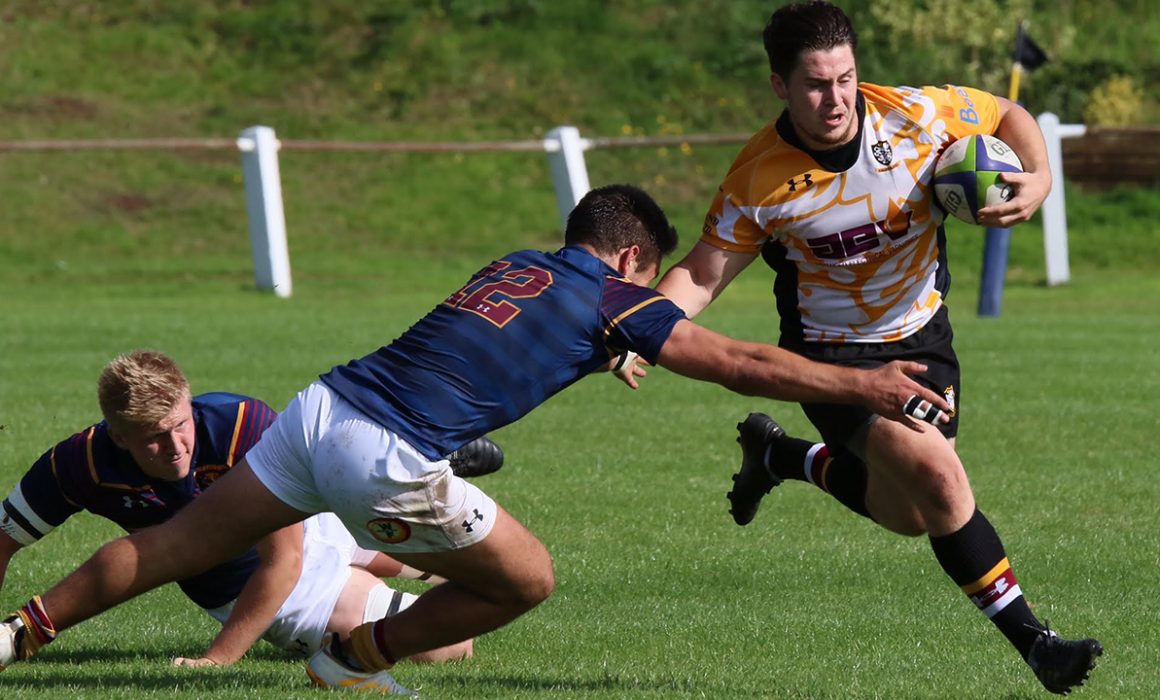 It is one of the most obvious clichés in sport, but a win is a win.

Victories are always a nice feeling at the start of a season because you have begun a fresh campaign on the front foot and four sides in National One maintained their winning starts in Round Two.

Coventry, Darlington Mowden Park, Bishop’s Storford and Blackheath all triumphed, but did so in different ways.

Cov were rampant, Darlington patient, Stortford calculated and Blackheath controlling. What followed would have been the same feeling for all four teams; satisfaction.

That emotion would have applied to Plymouth Albion, Ampthill and District, Caldy and Loughborough Students who all clinched their first victories of the new campaign on the weekend.

Coventry ran in eight tries as they secured a convincing win in their first home game of the season against Birmingham Moseley.

Will Maisey kicked five conversions as Rowland Winter’s man waltzed to their second victory in as many weeks.

Birmingham Moseley trailed 26-6 at the break, but Ryan Roach did go over in the second-half on a tough afternoon for the Midlands side.

Darlington Mowden Park produced an excellent second-half performance to beat Hull Ionians at Brantingham Park to continue their 100 per cent start to the campaign.

The score was level at 10-10 at the break after Chris Bell had glided over for the hosts before Simon Uzokwe touched down on the stoke of half-time.

However, centres Chris Auld and Ben Frankland as well as highly rated winger Adam Radwan scored fine tries for the visitors as they took the game away from the I’s in the second period.

Sam Wilson scored a late consolation for the hosts, but a ruthless and patient display from DMP clinched them the win.

Bishop’s Stortford made it back to back wins in National One as they beat Old Elthamians at College Meadow thanks to some composed kicking.

Stortford fly-half George Cullen slotted over 14 points as he helped guide his side to victory.

The only negative for Andy Long’s men was a serious looking injury to winger Cameron Ives late in the contest, but the visitors managed to see the game out thanks to the reliable Cullen.

Stortford had led at half-time 16-13, but at one stage were 16-5 in front, with Cullen scoring three penalties and converting Will Roberts’ try.

The OEs, who were promoted alongside Stortford last season, were very much in the match throughout its entirety but despite tries from James Gollege and Hamish Barton, they just couldn’t fashion another clear cut chance to steal their first victory at this level.

Joe Tarrant scored 15 points as Blackheath beat Rosslyn Park at the Rock to continue a very strong start to the new season.

The Club fly-half converted two tries and also dotted down to put the visitors 17-6 up at the end of the first half, with Harry Bate also going over.

Harry Leonard had replied for the hosts with two kicks from the tee, but that was as good as it got for Park as the away side took control after the break in wet conditions.

James Shanahan’s side also stood strong in defence and were rewarded for their endeavour when Tarrant slotted over his first penalty of the afternoon before Freddie Owen pounced on a loose ball to wrap up the win.

Plymouth Albion returned to winning ways in style as they breezed past Esher at Brickfields.

After a narrow defeat against Blackheath in Round One, Albion looked back to their best as they had too much for Esher, who received three yellow cards over the course of the afternoon.

Esher did have a moment to cheer about when Kariym Irving crossed to make the score 24-10 just after half-time, but Kieran Hallet’s side were rampant in the second period as they secured the victory.

Blackmore’s first helped the A’s respond after a flying start from the visitors as Danny Hartwell and Dan Watt scored quick fire tries to give the OAs a 14-7 half-time lead.

However, the home side seemed to spark into life after the break as Paino Hehea and Karim Lynch both went over to put the Bedfordshire outfit ahead for the first time in the contest.

A penalty from Watt reduced Ampthill’s lead, but Blackmore’s second score of the day gave them an 11 point advantage heading into the final 10 minutes.

The A’s were then reduced to 14 men and Old Albanian sniffed a possible comeback when Oliver Morris dotted down with a minute to go, but the home side held on.

Caldy secured their first ever win in National One as they produced a strong performance to record an impressive bonus-point win over Fylde.

The home side struck three times during the first period through fly-half Rhys Hayes, centre Gavin Roberts and No.8 JJ Dickinson for a deserved 25-12 lead at half-time.

Tom Carleton and Connor Wilkinson both dotted down for Fylde in a first period which saw Harlan Corrie and Greg Nicholls both suffer injuries.

But, the Lancashire side rallied at the start of the second period as Carleton grabbed his second try of the day to reduce the lead to six points.

The visitors continued to press but in the final 10 minutes, Caldy took the game away from Warren Spragg’s side as Roberts and then Ben Jones both touched down to seal the five points.

Cambridge suffered their first defeat of the season as they were beaten by Loughborough Students at Volac Park.

Two penalties from Owen Waters to one from Jack Green saw the visitors lead 6-3 at half-time.

Both fly-halves continued to exchange penalties after the break with Green levelling the scores up on 58 minutes.

But Oscar Hirskyj-Douglas’ try just after the hour proved decisive as the Students clinched their maiden win of the new campaign.