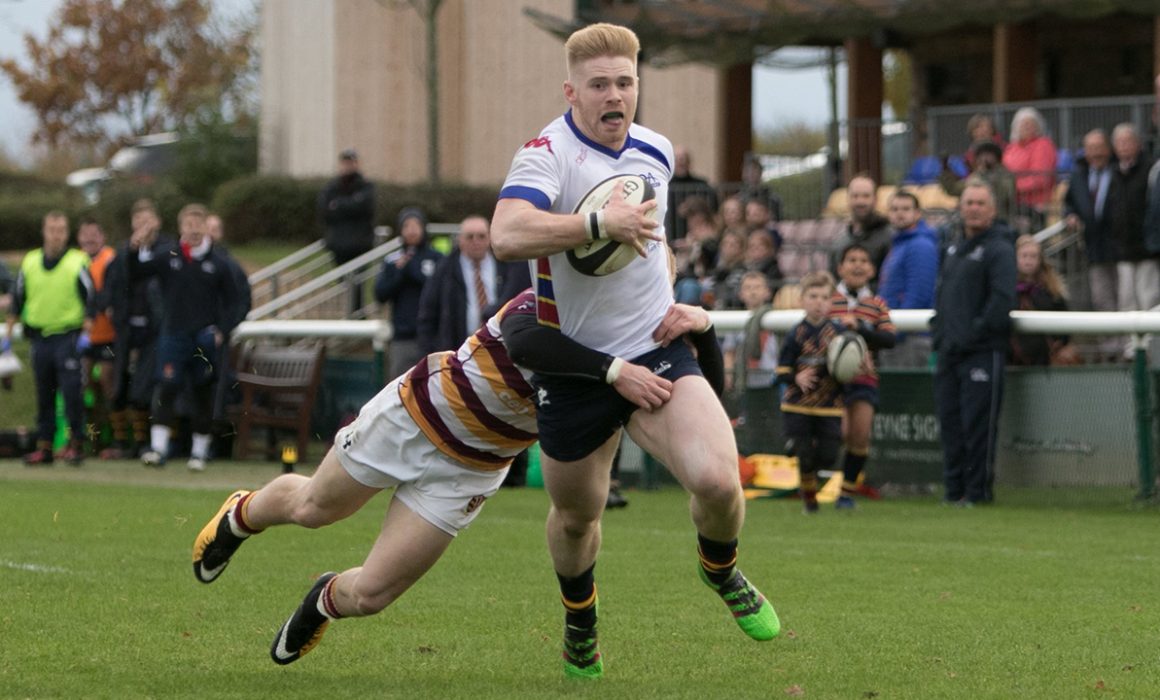 Coventry sealed a comprehensive home win over Caldy in National One to secure their 10th successive victory of the season.

Rowland Winter’s side remain unbeaten in this campaign and their 100 per cent record is still intact after a solid performance at Butts Park.

The Midlands side now have a 10-point lead at the top of the division after Darlington Mowden Park lost away at Esher while Plymouth Albion had to settle for a draw away at Rosslyn Park.

With Darlington and Albion dropping points, Ampthill and District moved up to second place in the table following a victory over Old Elthamians while there was a dramatic win for the impressive Bishop’s Stortford and a victory for Birmingham Moseley.

In the bottom half, there were morale boosting wins for both Hull Ionians and Fylde who beat Cambridge and Old Albanian, respectively.

Anthony Matoto scored twice as National One league leaders Coventry secured their 10th victory of the season against Caldy.

Matoto dotted down in either half as Rowland Winter’s men sealed an 18th triumph in a row and the Midlands side now sit 10 points clear at the summit.

Louis McGowan and Gavin Roberts crossed for Caldy, who have now lost their last seven matches.

Ampthill and District moved up to second in the National One table after a comfortable victory over Old Elthamians.

The A’s were in control of this encounter by half-time as converted scores from Sam Baker, George Thornton and Josh Sharp gave the hosts a 21-0 lead.

Kevin Barrett wrapped up the bonus-point for Paul Turner’s men seven minutes after the break, but a much improved OEs side managed to get over the line as Jay-Rudland Thomas dotted down just after the hour.

But as the visitors pressed for another score, they were turned over and punished by Baker as he crossed on 78 minutes to complete the win.

Esher secured back to back wins for the first time this term as they outclassed Darlington Mowden Park.

Ben Loader scored from a turnover in possession and Billy Harding ran in a second for Esher, either side of Shaun McCartney’s try for Darlington Mowden Park.

Two tries in 11 minutes by Tom James before the break increased Esher’s advantage, but the away side kept themselves in the contest as Brandon Asher-Wood raced into the corner on 51 minutes.

Both sides then exchanged scores through Loader and a penalty try, but DMP set up a tense finish when Joe Craggs crossed on the left hand side.

However, it was too little, too late for Danny Brown’s men who have now slipped to third in the table.

A late try from flanker Eogan Grace snatched a draw for Plymouth Albion at Rosslyn Park.

Albion took an early lead through two Dan Collier tries, before Park responded with a score of their own.

The visitors were then reduced to 13-men, but despite the numerical advantage favouring the home side, Plymouth went into the break 21-7 up thanks to an Ed Holmes score.

However, two quick tries after the restart from Park brought the game level on 68 minutes before their bonus-point try put them ahead for the first time in this contest.

Park’s conversion hit the post and history was to repeat itself. Grace went under the sticks to tie the game with a minute remaining, but Dan Mugford’s kick also rattled the woodwork as Albion had to settle for a second draw in three matches.

George Cullen slotted over a late conversion to see off Blackheath as Bishop’s Stortford overturned a 19-point deficit to secure their fourth win on the spin.

Geoff Griffiths and Joe Tarrant scored tries for Blackheath before Harry Bate crashed over to give Club a commanding lead after 35 minutes.

Will Roberts dotted down just before the break for Stortford and that try seemed to inspire the visitors as they staged a remarkable fightback in the second period.

Stortford began to take charge through Chris Smith’s try and despite Blackheath defending valiantly; their defence was breached right at the death.

Full-back Robert Duff glided over for Stortford and Cullen held his nerve to kick the conversion.

Birmingham Moseley sealed a second successive victory thanks to a clinical first-half display against Loughborough Students at Billesley Common.

The hosts led 24-3 at the break thanks to tries from Mark Harrison, Jacques Le Roux and Greg King (2) to Will Kaye’s penalty.

Le Roux and Tim Molenaar crossed after the break, with Harry Mahoney going over for a consolation late on for Students.

Hull Ionians battled to their third victory over the season thanks to this win against Cambridge in an excellent clash at Brantingham Park.

Jack Green’s penalty opened the scoring for Cambridge, Rikki Stout replied for the I’s with the first try of the afternoon, before Michael Ayrton rounded off an excellent move to score for the visitors.

Stout’s try, after a mistake in the line-out by Cambridge, put Hull Ionians ahead after the break.

Cambridge responded via a Green penalty, but Steve Slingsby’s score and a penalty try gave the I’s some breathing space for the first time in this encounter.

The Blood and Sand continued to fight and they cut the deficit to six points when Oli Petrides went over.

Chris Bell then looked as though he had snatched a bonus-point from Cambridge when he slotted over a drop-goal, but Ross Stewart’s men did have something to take back to Volac Park thanks to Ben Penfold’s penalty.

Fylde ended a run of four consecutive National One defeats with a narrow victory over Old Albanian.

The hosts were then unable to extend their advantage as Fylde flew out of the blocks. Chris Briers finished off an excellent try, which was converted, to reduce OAs’ lead to two points.

OAs then exerted pressure on the Fylde line, but Warren’s Spragg’s men stood firm and were rewarded for their defensive efforts late on as Smith struck again from the tee to clinch the win.