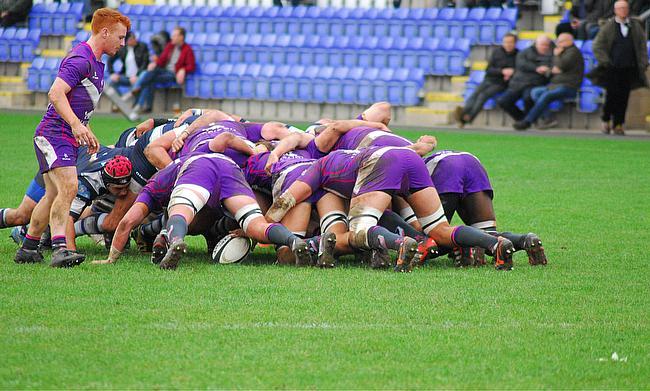 Loughborough Students secured their first victory of the National One season as they downed last year’s runners-up Darlington Mowden Park in Round Eight.

The Students have ended a seven-match losing streak and now sit 10 points from safety after their maiden win of the campaign.

At the right end of the table, there are new leaders as Caldy left it late to beat Cambridge while Chinnor snatched a draw against second placed Old Elthamians at Kingsey Road.

The draw in Oxfordshire has allowed Blackheath, Rotherham Titans and Rosslyn Park to improve on their league positions following victories over Birmingham Moseley, Esher and Sale FC, respectively.

Elsewhere in National One, Ampthill and District thrashed Cinderford while Plymouth Albion edged past Bishop’s Stortford.

A late Nick Royle try allowed Caldy to edge home against Cambridge and move to the top of National One.

With Cambridge leading 22-15 just before the hour, Royle scored twice in the final quarter to snatch the victory for the away side.

Congratulations @CaldyRUFC on edging the win ?????? good luck for the rest of the season and we look forward to the return match. pic.twitter.com/LuV0cRo6v3

Gavin Roberts and Harrison Crowe crossed in the first period for Caldy.

The hosts were able to seal a losing bonus point as Rob Conquest and Kwaku Asideu both touched down while Lawrence Rayner kicked 12 points.

Reon Joseph scored a late try to earn Chinnor a draw after Old Elthamians staged an excellent comeback in this superb National One encounter.

The home side went ahead when Caolan Ryan landed two penalties, and they led 13-3 after Craig Holland went over for a converted score.

Fred Hosking got the visitors back in it shortly after, and then Hamish Barton touched down to give OEs an 17-13 lead.

Tom White landed a penalty two minutes from time to nudge Old Elthamians closer to victory, but Joseph dotted down with the final play of the game as Chinnor took a share of the points.

Blackheath have moved up to third in the National One standings after beating Birmingham Moseley at Well Hall.

The hosts led 20-12 at half-time after Henry Staff, Jake Lloyd and Harry Bate all crossed the whitewash, while four penalties from the boot of James Williams kept Moseley in touch.

The visitors then cut the gap to a single point after the restart as Chris Brightwell darted over, but a yellow card to Mike Perks allowed Blackheath to take control once more.

Nick Foster touched down before Craig Dowsett went over from close range to make it 30-19.

Moseley battled and secured a losing bonus-point through Joe Wrafter, but their tough start to the season continued.

Seb Nagle-Taylor and Henry Roberts both touched down twice as Rotherham Titans eased to their fourth win on the bounce against Esher.

Rotherham struck early when head coach Joe Barker scored the opening try before Roberts and Nagle-Taylor grabbed their first scores of the afternoon.

Scrum-half Alex Dolly extended the Titans’ lead before the interval and Nagle-Taylor added to their advantage shortly after the break.

Connor Dever made it 38-3 before Esher reduced the arrears with quick-fire tries from Cameron Gentles and Joe Beckett.

However, fittingly, Rotherham rounded-off proceedings as Roberts scored their seventh try of this contest.

Rosslyn Park inflicted Sale FC’s first home loss since May 2017 as an excellent second-half performance saw them win this entertaining National One clash.

Jack Moorhouse dived over on two occasions as Sale FC took a healthy lead inside the first quarter, but Tom Vaughan-Edwards added to Henry Spencer’s earlier score for Rosslyn Park as the visitors rallied before the break.

After the interval, Spencer grabbed his second to give Park the lead for the first time in this contest, but a wonderfully executed drop goal from Chris Johnson cut the advantage to just a single point.

However, Hugh Tizard’ try for Rosslyn Park proved to be decisive on 66 minutes as Sale failed to bounce back. Johnson did land another penalty, but a long-range effort from Greg Lound sealed the victory for the away side.

Ampthill and District picked up their first win in three matches as they scored eight tries to outclass Cinderford at Dillingham Park.

Alex Lutui’s early score helped the A’s to a 7-0 lead and they were 28-3 ahead at the break as the home side ran in a further three tries to secure their bonus point.

Ollie Morris, Josh Sharp and Spencer Sutherland all crossed with the latter completing his hat-trick shortly after half-time.

Sam Hanks and Morris also touched down in the second period for Ampthill, while Cinderford’s only score of the afternoon game via Thomas Heard on the hour mark.

Loughborough Students held off Darlington Mowden Park to secure their first win of the National One season.

The home side, who had lost all seven of their matches ahead of this contest, shaded the opening period as tries from Henry Lavin, Charlie Reed, Cameron Jordan and Thebord Flament gave the Students a 26-19 lead at the break.

Matt Dudman (2) and Warren Seals had crossed in the first period for DMP and the away side were right back in this encounter when Alfie Barron touched down at the start of the second 40.

However, DMP weren’t able to assert their authority on this contest as Austin Beckett and Will Brown scored either side of a Seals penalty to keep Loughborough on top.

The hosts were then able to wrap up their much-needed victory as Reed slotted over a penalty 10 minutes from time.

Paul Davis’ late try ensured Plymouth Albion picked up their third home win on the spin as they inflicted a defeat on Bishop’s Stortford.

A try from Connor Eastgate plus eight points from the boot of Matt Shepherd were cancelled out as Manu Vunipola landed two penalties for Stortford while Mark McCraith touched down to leave the game at 13-13 going into the break.

Both sides continued to be accurate from the tee as Stortford held a 19-16 lead as the game headed towards the final 10 minutes, but they could not find a decisive blow.

Instead, Davis barged his way over late on to snatch the win for Albion at Brickfields.