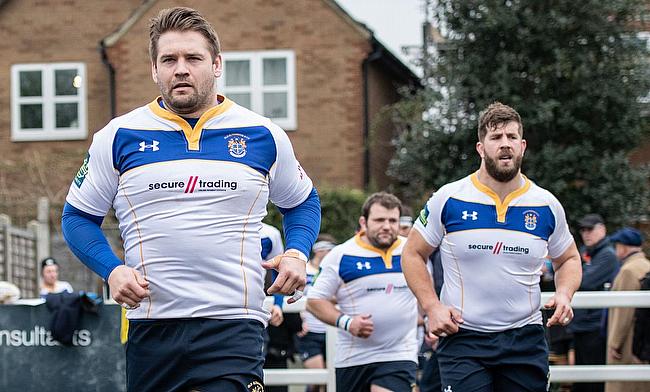 Mike Friday may be over 4,000 miles away, but he is excited by what is taking shape.

The current USA Sevens head coach is also Old Elthamians’ Academy director and he has watched on from afar as the club’s partnership with St Mary’s University, is continuing to develop.

This season, St Mary’s and OEs are having brilliant campaigns on the field, but both are also busy planning for the future.

The five-year partnership, which aims to deliver co-ordinated educational and rugby union opportunities to students and the club’s players, was announced at the beginning of the season and the bond between St Mary’s and OEs is already producing positives.

The recent England Sevens academy call-ups for Aaron Grandidier-Nkanang and Cameron Tucker-White highlight the early progress of the partnership and the willingness to offer young players a first-class education with a top level of rugby.

Great news for the @ElthamiansRFC Academy at St Mary’s ?? https://t.co/OkpEq8Cerk

“Strategically, I set up the academy partnership,” Friday told TRU.

“I watch the collegiate system here [in the USA], I see the academy system in the UK and I think it can be a better system.

“I think, first and foremost, too many young players are leaving academies and getting let go.

“Even though they may have played at such a high-level until they are 18 and probably finished with great A-Levels, they may think they’ve not succeeded and they are down on themselves. That’s where the rugby pathway let’s itself down in the UK.

“I think a different type of academy approach and the collegiate system approach, which is holistic learning, helps grow the person as well as developing the rugby player.

“It is about saying rugby is part of your life when you are 18-21 years-old and it’s not all of your life. Your studies fit around it.

“To be a more holistic person, you need to mix with other people than just rugby players. You need to socially develop and you need to comprise and interact, not just with people you have things in common with, but people you don’t have.

“You need to experience different diversities of a population and where can you do that? Full time at university.

With Friday based in America, experienced coaches Pete Richards and James Brooks are overseeing the partnership from a St Mary’s perspective.

On the pitch, the duo have guided the university to the top of the BUCS South B division and with St Mary’s having won all nine of their domestic matches so far this term, the title is now within touching distance.

“In terms of the tactical day-to-day execution, all the credit there goes to Pete Richards and James Brooks,” Friday said. “They have done a fantastic job.

“They understand what it takes to be a professional rugby player and they are very good at developing players. I have stepped away a little more and let them do the day-to-day running because the partnership is working great.

“It is year one, but if they get promotion, then it will be a bit of consolidation to then go again in the next 12-18 months.”

The clear aim for St Mary’s is to reach BUCS Super Rugby.

The top tier of university rugby has continually developed since it was introduced in 2016 and in that time, it has become a fruitful pathway for players who want to take the next step in the game.

Alex Dombrandt’s performances have got people talking this season – and despite not being included in England’s immediate plans, the former Cardiff Met man is only just getting started…#GallagherPrem #GuinnessSixNations https://t.co/QpJtfZ60PS pic.twitter.com/sop7IEEhUJ

“BUCS Super Rugby is a great standard of rugby and a great breeding ground,” Friday said.

“When I look at a number of these players, like I said, who are let go by academies and are 18 years-old, they think they’re failures. I don’t think they need to be.

“I think Exeter [Chiefs] do a decent job of their link with the University of Exeter in BUCS Super Rugby. I think that will be strengthened and I think Premiership clubs have to look at that.

“For us, what we’re building is credibility and continuity in young players. We offer them an alternative avenue to become a professional rugby player. We want them to continue chasing their rugby dream, but also more importantly, grow holistically as person and fulfil their potential on the educational side.

“Unfortunately, life as we know is brutal and rugby can be over in a second. You need other things in your life to become the best version of yourself. That’s what is behind it for me.”

While St Mary’s are aiming to take the next step, so are Old Elthamians. Their recent rise through the National Leagues has been remarkable and they currently top the table in National One.

Under the stewardship of Gavin Lach and Sam Howard, OEs have gained numerous promotions over the last decade and now they sit five points clear at the summit of the third tier.

“The vision for Old Elthamians is focusing on homegrown players over the next five to eight years to try and push on and become that new Exeter [Chiefs],” Friday said.

“That’s the challenge. Let’s just hope they are given the chance to fulfil that dream rather than listening to this ‘closed Premiership’ because of self-interest from the clubs which are in it!

“What happens on the surface at OEs is down to the guys like Sam Howard. Sam has done aan amazing job from a coaching perspective and he and the team at Elthamians are doing really well.

“They are scoring lots of points and they are finding a way to win games at the moment. It is a very open league this season and normally it’s not. It looks like it could be Elthamians, Ampthill [and District], Blackheath and Rosslyn Park who I can see the title being between over the next month or six weeks because they all have to take points off one another.

“It is an interesting time and if Elthamians can come out on top, then great! If they don’t, then they will learn from the scars and hopefully be in a good place to do that next year.

“It is fundamental for the overall academy if they are to thrive and grow as they want, that the club do take that next step whether that is this year or next year.”

It will no doubt be a thrilling climax to the season for both St Mary’s and OEs, but for the partnership, this is just the beginning.

It is still in its embryonic stages and Friday is keen to stress that point, but the future for both parties seems to be heading along the right path.

“We won’t see the true return on the academy in OEs’ first team for another two years, but Rome wasn’t built in a day!” added Friday.

“You have got to get the infrastructure right and that is what Pete and James are doing with St Mary’s. The university have been fantastic. Their Head of Sport, Andrew Smith, has been great and that link into the OEs, I think, will only get stronger and stronger.”