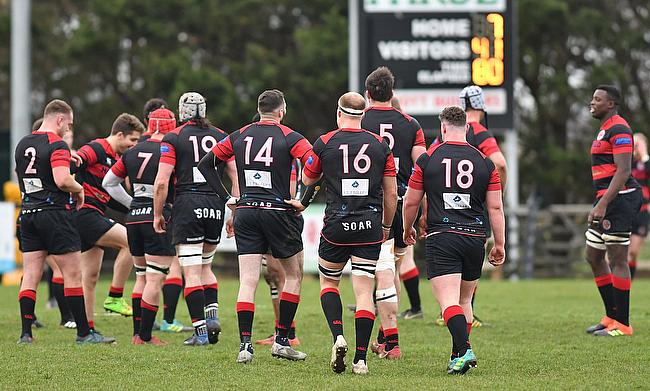 Birmingham Moseley fought back to win a terrific game against Esher at Billesley Common as the hosts moved further away from the relegation places. (Photo Credit: Simon Cooper)

Richard Protherough’s side secured their third win on the bounce and it means the Midlands club are now six points clear of the drop zone while bottom of the table Esher are eight points from safety.

Meanwhile, rivals Loughborough Students, Caldy and Cambridge all suffered defeats in Round 26 against Blackheath, Rotherham Titans and Old Elthamains, respectively.

Elsewhere, Bishop’s Stortford’s excellent 2019 continued as they beat Cinderford and Sale FC increased the gap between themselves and the bottom three with an impressive win over Chinnor.

Ampthill and District remain five points clear at the top of National One as they held off a fightback to win at Darlington Mowden Park.

Touchdowns by Aleki Lutui, James Pritchard, Jon Kpoku and Sam Hanks gave the A’s a commanding 28-5 lead at the break.

Old Elthamians kept the pressure on league leaders Ampthill and District with a comfortable win over Cambridge.

Ben Penfold kicked the only points for Cambridge, who sit just one point above the relegation zone with four games in the season remaining.

As for the hosts, they are five points behind Ampthill as the title race intensifies in National One.

Rosslyn Park stretched their unbeaten run to seven matches as they managed to get past Plymouth Albion at the Rock.

Arthur Ellis and Dean Squire traded scores before two tries in the final 15 minutes, including one from Jack Gash, put the hosts in control.

Albion responded as Squire dotted down and the away side were able to leave London with two bonus-points as Plymouth scored their fourth try late on.

The only negative for Rosslyn Park was their failure to claim a bonus-point victory, but with leaders Ampthill and District to come on Saturday, Kieran Power’s side remain firmly in this title race.

Blackheath claimed their fifth victory in a row following an emphatic win over Loughborough Students in the Midlands.

A penalty try, plus scores from Andrew Daish and Leo Fielding, gave Blackheath a 22-7 lead at half-time, with Andrew Nathan-Boye going over for the Students.

In the second period, ‘Club’ ran in five tries as they racked up a half century of points while Loughborough could only manage scores via Harry Priestner and Will Brown.

The result for Blackheath keeps them eight points behind table toppers Ampthill while Loughborough sit seven points shy of safety.

Caldy remain in the relegation places in National One after suffering a four-try defeat against Rotherham Titans at Clifton Lane.

The Wirral outfit are still one point from safety, but now they have won just one of their last 12 games.

An Alex Dolly penalty, as well a brace from Jack Bergmanas, gave the home side a 17-0 lead, but Lewis Barker hit back for Caldy on the stroke of half-time.

However, that was as good as it got for the visitors as Rotherham added to their tally nine minutes into the second period following Callum Irvine’s effort.

It went from bad to worse for Caldy when Derek Salisbury was sent-off just after the hour and Rotherham wrapped up the win on 71 minutes when Ali Thomson dotted down.

Sale FC picked up an excellent and potentially vital win over Chinnor to move nine points clear of the relegation places in National One.

Chris Taylor crossed to give Sale FC the lead, but after an earlier penalty from Bertie Hopkin, Ben Thomas’s try put Chinnor ahead at the break.

The hosts came out of the sheds in a determined mood and Dan Birchall’s effort, plus a penalty try, put Sale in the driving seat.

Chinnor refused to lie down as tries from Craig Holland and Joe Dancer, either side of a Kieran Wilkinson penalty, made it 24-22.

However, Sale would have the final say on proceedings as Taylor grabbed his second to seal another home win for Jonathan Keep’s side.

Bishop’s Stortford continued their superb second half of the season as they secured a bonus-point win over Cinderford.

Tries by Reuben Bird-Tulloch and Nick Hankin, plus three penalties from Tom Banks, helped Stortford into a 23-14 half-time lead.

Cinderford cut the deficit to six points after the break as Stefan Hawley pinged over a penalty to add to a penalty try and a score from Jack Preece.

But, Stortford were able to make sure of the win when Joss Linney and Bird-Tulloch both crossed as the hosts clinched their eighth victory from their last nine matches.

Birmingham Moseley have extended the gap between themselves and the drop zone to six points after a dramatic win over rivals Esher.

The hosts trailed 15-12 as Cameron Gentles and Kariym Irving both crossed, while Moseley’s points came via Lewis Bean and Graham Geldenhuys.

Both sides swapped scores to begin the second period as Ravai Fatiaki’s effort was cancelled out by Gentles, but Moseley were able to nudge themselves in front thanks to a James Williams penalty.

An excellent score from Joe Beckett put Esher back ahead, but the decisive moment came when Laurence Cowen rumbled over the line to give Moseley a 29-27 lead.

The hosts were then able to stay strong in defence to clinch a third win on the spin while Esher’s latest defeat leaves them eight points from safety.