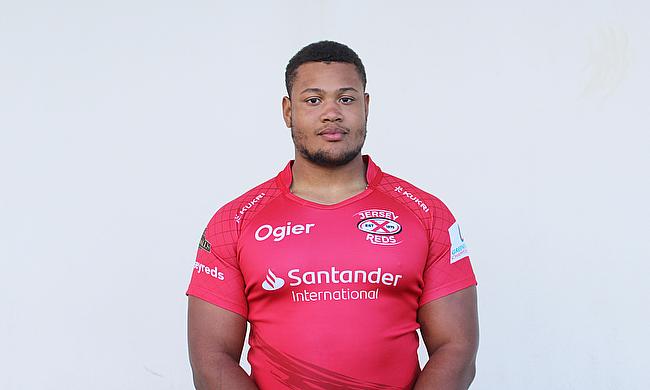 Jersey Reds’ Ziana Alexis feels the National Leagues have acted as a springboard for his career.

The 22-year-old, who began playing at London One North side Amersham and Chiltern, admitted his time in the National Leagues were some of the “most important moments” in his rugby journey.

It gave the prop the chance to play in National One and National Two South and he believes he gained some valuable experiences.

“They [the National Leagues] were some of the most important moments in my life,” Alexis said.

“With the National Leagues, you can expect a good source of different experiences and different levels where you can test yourself. Each league is totally different from each other.

“From playing in the different leagues, I think there is a massive change in each league and that only helps you. The biggest thing is learning from everyone you meet. There are so many different players and coaches who have all gone down different routes. It’s key to take everything on board to become a better player and that helps you perform.”

Alexis also revealed how the competition for places in the National Leagues is strong and insisted battling for a spot in a starting XV is beneficial for any player who is aiming to take the next step in the game.

“I think the best thing is to take your opportunities” Alexis said. “There are still a lot of players trying to take your spot when you play in the National Leagues so competition is still quite fierce.

“That different level of competition is good otherwise you can just settle where you are which is not something you want if you’re aspiring to be a professional rugby player.”

Alexis initially started the season with Cambridge after joining the club last summer, but following just two months with the National One side, he was presented with the opportunity to move to Jersey Reds.

And after being released by Ealing Traillfinders at the end of the 2017/18 campaign, the forward accepted the offer to return to the Greene King IPA Championship.

“I was involved a lot for Cambridge,” added Alexis. “I was playing quite well and I think Jersey had been looking at me since the beginning of the season. I then had an opportunity to go there. I don’t think Cambridge wanted me to go, but it was a chance for me to play full-time rugby.

“I don’t think opportunities like that come around very often. A lot of players are available from all sorts of places around the world. I think when the opportunity comes, you have to take it.

“So far, it has been great at Jersey. The boys have been really good so things are going well.”

The former England Counties U20s man made his debut for the Reds in their 41-10 victory over London Scottish in the Championship Cup back in November and five weeks later, he appeared in the GK IPA Championship for the Reds against his former club Ealing.

However, after the clash last month, Alexis received a four-match ban for a dangerous tackle meaning he is ineligible for selection until February 5th.

But despite the disappointment, Alexis is excited to be back in the GK IPA Championship as Jersey, who sit fifth in the table, look to build on a solid season so far.

Alexis said: “I have put in a lot of hard work fitness wise and I have had to learn the game more. There is massive difference in terms of the structure and calls you need to know. Everything needs to be perfect. It was great to play for Jersey and see all the efforts pay off to make that debut.

“It is important I keep that drive now. You get different obstacles and I think it is about getting up and going again. It is down to me to respond. I am just excited to keep racking up the appearances!

“The environment at Jersey is to win. The relentless drive of all of us is definitely the big thing.”