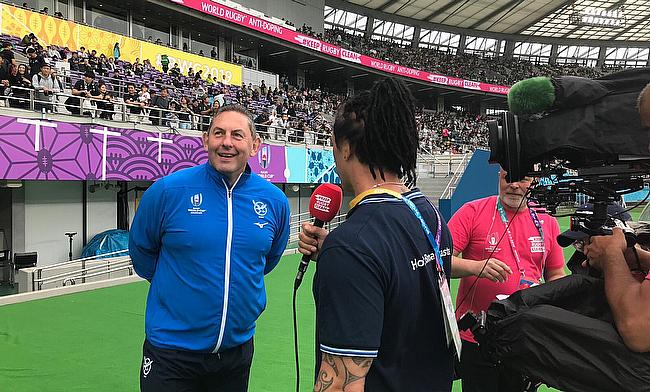 In the latest installment of NCA Rugby’s New Arrivals, we talk to the man that led Yorkshire Carnegie as Director of Rugby until the end of the season, Phil Davies. (Photo Credit: Phil Davies Twitter)

Having led Namibia in the 2019 Rugby World Cup, Davies returned to Yorkshire after 14 years away from the team, having established the club early on in the professional era. Upon his return as DoR, much had changed.

The club was no longer professional and sat in the relegation zone of the Championship. Unfortunately, not much could be done and the team will now be joining National One next season. Davies will not be as hands on with the side, moving to a consultancy role, but he will still be keeping a close eye on Leeds.

Carnegie has been the proving ground for many a top-level player. Danny Care, Jordan Crane and Tom Biggs were all nurtured in the club’s academy that was once headed up by Stuart Lancaster. The academy was established during Davies’ first tenure at the club, which spanned from 1996 to 2006, with Sedgley Park Tigers’ Scott Barrow now involved with the setup.

Davies hopes that the team can return to its original values, nurturing young local talent, as well as that from university rugby programmes in Leeds, to make the spine of future Carnegie sides for years to come.

Congratulations to @RugbyNamibia on their qualification to Rugby World Cup 2019.

They join @AllBlacks , @Springboks, @Federugby and the winner of the repechage (TBC) in Pool B pic.twitter.com/vhTbjGwDku

“There’s a lot of resources, there wasn’t much going on at the universities when we went back,” Davies said. “When we did go back, we reconnected some of the relationships I had from years and years ago. The coaches there and the players and the university itself was fantastic.

“We were trying to use all the resources that we have got around to try, not just to help our side, but to help the city as well. There are lot of good rugby clubs as well in Leeds and that’s how we built it years ago.

“We built it very much based on local talent and trying to develop that talent so that it can achieve its maximum potential. That’s the same old principles we used this time around because they are well established for us.”

Davies hopes to redevelop the club’s culture. The former Wales international has developed a renowned reputation as a leader and forward-thinking coach. Heading up Namibia since 2015, Davies has laid the foundation for the country’s future generations of rugby internationals.

Establishing a national training centre for players to use when possible, Davies also reduced the average age of the nation’s starting XV. Having left his role with Nambia post-Rugby World Cup, the Welshman now runs his business, Phil Davies Consultancy, full-time, whilst also trying to redevelop the culture of Carnegie.

“The level of competition, or the name of the league is not the most important thing to me at the moment,” Davies said. “It’s recalibrating the basics of what the club was built on. It was built on pride and passion and work ethic and a clear identity that represented the city of Leeds with a great deal of pride.

Legendary Leeds Tykes Coach @pd4rugby is to return to the club as Director of Rugby with immediate effect
Visit https://t.co/xboeTi7N1B for more details pic.twitter.com/mLMlDtClRE

“Those are the little things, well they’re not small things, but those are the key things we need to reset. Look at it whichever way you want to in that regard, but it’s about recreating the identity, building the momentum to sustain, build and challenge.”

It is clear that what Carnegie are doing is, for all intents and purposes, starting again. With virtually an entirely new playing squad last season, the majority of their players had been playing in the NCA the year previously, some helping Hull Ionians into National 1 before making the leap to the Championship.

Having had some uncertainty shrouding the club in the past year or so, Davies simply looks to the future and what he hopes to build. Making it clear that next season is about re-establishing the team and rebuilding the club, Davies is looking forward to seeing familiar faces in the third division.

“It’s a great competition and next year is our opportunity to re-establish and sustain,” Davies said, “I’m not even thinking about anything other than that at the moment. We just want to make sure that come the end of next season we are still in National 1, we play some good rugby and we have created a culture and a team we are proud of and keep building.

“The speed of our rebuild, in terms of moving up to a different league, is a far ambition at the moment. Our ambition is to come back, reset, rebuild, get credibility and move forward. It will be good to see a lot of people I know in English rugby; it is a wonderful rugby country. As is Wales of course. It will be a big challenge.”