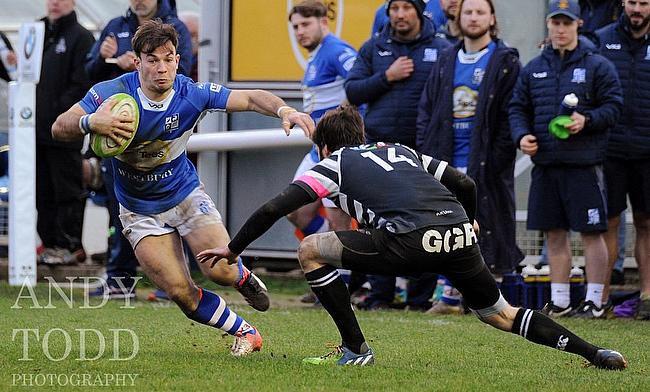 Old Elthamians became the latest team to move to the summit of National One after securing a bonus-point victory against Sale FC in Round 20.

Gavin Lach’s side are now level on points with Ampthill and District, but they sit in top spot because they have won one more game than the A’s.

Ampthill’s failure to pick up maximum points from their victory over Cambridge means they fell to second in the standings while Rosslyn Park are up to third place after defeating title rivals Blackheath at the Rock.

The promotion hopes of Rotherham Titans and Chinnor suffered a setback on the weekend as both sides lost to teams currently embroiled in a relegation battle.

Rotherham were beaten by bottom of the table Loughborough Students while Chinnor were humbled by a rejuvenated Bishop’s Stortford at Silver Leys.

Stortford are now out of the drop zone following their win on Saturday while rivals Birmingham Moseley managed to salvage a draw at Darlington Mowden Park and Esher lost on the road against Cinderford. Elsewhere, Caldy were beaten by an in-form Plymouth Albion.

Old Elthamians moved to the top of National One thanks to a bonus-point victory over Sale FC at College Meadow.

Tries from Jonty Rawcliffe and Tom Ailes gave Sale a 14-5 lead, but Kieran Moffat added to Ben King’s earlier score to help OEs cut the deficit to just two points by the interval.

??TRY-LIGHTS ?|
Four @ElthamiansRFC tries in the hard-fought 32-24 win against @SaleFC at College Meadow on Saturday which sent us back to the top of #Nat1 .

After the break, Tom White nudged the hosts in front with a penalty and from there, OEs took complete control.

George Perkins and Cam Holenstein added touchdowns, while White also landed another penalty to wrap up the win for Gavin Lach’s side.

Ampthill and District ended their recent hoodoo against Cambridge as the A’s clinched a victory at Volac Park to stay firmly in the title race.

After Ben Penfold and James Pritchard had exchanged penalties, Spencer Sutherland’s try gave the away side the lead as they looked to end a three-match losing streak against the Blood and Sand.

Just before the break, a penalty try was awarded as Ampthill’s pack drove towards the line and the visitors extended their advantage at the beginning of the second period as Jon Kpoku dotted down.

With the score at 22-6, Ampthill would have been hoping to kick on to secure the bonus-point, but the game petered out with Cambridge providing the final points of the contest as Mike Ayrton scooted over.

Rosslyn Park recovered from successive defeats as they saw off promotion rivals Blackheath to spark their title bid back into life.

After Greg Lound’s early penalty, Park bossed the first half with Charlie Amesbury and Hugo Ellis both going over for the hosts.

Lound also added a further five points from the tee, while Stef Liebenberg’s converted score provided a response from Blackheath.

However, Lound landed his third penalty of the afternoon to ultimately seal the win for Rosslyn Park while Joe Tarrant’s kick clinched a late losing-bonus point for ‘Club’.

The result means Park are now four points off the top two while Blackheath are five points behind the leaders.

Loughborough Students gave their survival hopes a major boost as they stunned Rotherham Titans to secure their first away victory of the season.

A penalty try and three points from the boot of Alex Dolly gave Rotherham a 10-0 lead, but Tim Bitirim crossed for the Students, before Dolly landed his second kick as the visitors trailed by five points at the break.

Bitirim got his second try for Loughborough immediately after the restart before Dolly, and opposite number Charlie Reed, exchanged penalties as the away side stayed in front.

Harry Dunne’s score on the hour mark put the Titans back ahead, but the division’s bottom club produced the decisive response as the superb Bitirim completed his hat-trick before Ben Christie dotted down to seal an important victory for the Students, who are now five points from safety.

Bishop’s Stortford moved out of the relegation places in National One with a superb bonus-point win over Chinnor.

Nick Hankin, Joss Linney (2), George Keen and Tom Banks crossed for first-half tries to put Stortford 33-10 in front, with Greg King going over for the away side.

A brace from Rob Duff after the interval was the icing on the cake for the hosts as a third victory in a row means they are now one point above the drop zone.

Cinderford flanker Aaron Ryan scored two tries as Paul Morris’ side secured their third win on the trot against Esher at Dockham Road.

After being shown a yellow-card on 23 minutes, Ryan opened the scoring on his return to the field following a catch and drive from a lineout.

Jack Hayes used his pace to dart over as Cinderford increased their tally in the second period before Matt Bennett bundled over for the hosts.

Cinderford then wrapped up the bonus-point and the victory when Ryan barged his way over as the Foresters’ excellent recent form continued.

Plymouth Albion secured their sixth win from their last seven games as they beat Caldy, despite having Paul Davis red-carded.

The Albion hooker had opened the try scoring for his side, but on 36 minutes, he was dismissed for an alleged kick.

Nevertheless, Plymouth still held a 10-3 lead at the interval and after the restart, they were able to take the game away from Caldy.

Matt Shepherd kicked a penalty before John Kelly and George Mills both dotted down as Kieran Hallett’s side maintained their good form.

As for Caldy, Ben Jones provided their only points of the afternoon and it is now six defeats in a row for the Wirral side.

The clock was well into the red when Le Roux wriggled through a gap to touchdown, but the visitors did miss the chance to snatch a victory as the conversion sailed wide.

Moseley’s other points came via a penalty try and score from Josh Poole in the first period as the Midlands side now sit just one-point shy of safety after this result.

Matt Heaton crossed for DMP before the break while Matt Dudman went over almost immediately after the restart.

Warren Seals’ late penalty looked to have secured another win for the hosts, but they were denied by Le Roux.