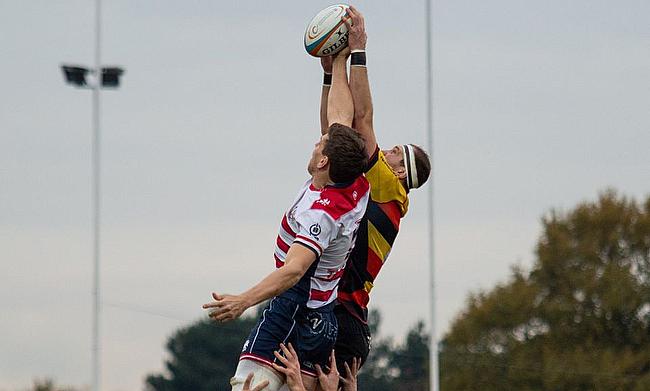 The National League train rolls into Round 12 this weekend and as we edge closer to the midway point of the campaign, the big fixtures are beginning to come thick and fast. Photo Credit: (Liela Hamilton-Dakar)

After falling short in their top of the table clash against Rosslyn Park in Round 11, National One leaders Richmond will be keen to bounce back from their derby day defeat when they travel to Sale FC on Saturday, but their near neighbours will be ready to strike if they put another foot wrong.

Park are now only four points behind Richmond following last weekend’s triumph and they host Hull Ionians in Round 12 as they aim to put more pressure on their local rivals.

The attention in both National Two North and National Two South this week is at the wrong end of the respective divisions. In the north, Luctonians and Scunthorpe meet with both sides keen to dig themselves out of trouble whilst down in Bristol, Old Redcliffians face Sutton & Epsom in a crucial clash towards the bottom of the table.

Below is a more in-depth look at the action ahead of Round 12 in the National Leagues:

It was the standout game last weekend. The top two in National One renewed their local rivalry with Richmond beginning the day seven points ahead of near neighbours Rosslyn Park, however, the league leaders were unable to tighten their grip on pole position as Park claimed the victory at the Athletic Ground.

Richmond’s advantage at the summit is now down to four points so they will be keen to get their season immediately back on track when they travel to Sale FC in Round 12. Home comforts have certainly been the platform for Sale’s campaign so far as four of their five victories have come at the CorpAcq Stadium. Sale so nearly pulled off a remarkable fightback against Chinnor last time out and back on their own patch, the 13th-placed side will provide a stern test for Richmond on Saturday.

If Richmond were to slip up in the North-West, Rosslyn Park will be ready to pounce. Kieran Power’s side reignited the title race last weekend and they are heavy favourites to stretch their unbeaten run to five matches when they welcome Hull Ionians to the capital on Saturday.

https://t.co/Gq5dv19sVY This week's instalment comes from National 1 where a spontaneous build-up and deft grubber is finished off by @rosslynpark's Henry Robinson, proving to be the decisive score in this top of the table clash #Nat1 pic.twitter.com/9bM9sSGTht

The contrast between Park and the I’s couldn’t be greater this season, but after a disappointing start to the term, the Yorkshire club had something to smile about in Round 11. An excellent triumph over relegation rivals Canterbury means the men from Brantingham Park secured their first victory of the campaign and they will be hoping the win can be a catalyst for their season. The I’s are 17 points from safety, but their priority will be to string a positive run of results and performances together.

On the back of Rosslyn Park’s win over Richmond, it wasn’t just the former who gained ground on the table toppers. Whilst possible promotion contenders Blackheath and Rams failed to take advantage of Richmond’s setback, Chinnor were one of the sides who were able to capitalise. Matt Williams’ side are beginning to hit their straps and a blistering first half display against Sale FC proved to be enough for their latest win, despite a rousing comeback by the visitors.

Chinnor head into Round 12 having not lost in November and they travel to Plymouth Albion this weekend aiming to continue their momentum. The Black and Whites are only five points off second-placed Park whilst Albion currently occupy 12th spot in the division. Their inconsistency this term has plagued Ben Gulliver’s men, but their success has come at Brickfields. Albion’s four wins have all been at home and they will be hoping that trend continues on Saturday.

Elsewhere across the division, third-placed Blackheath will be aiming to bounce back when they travel to Birmingham Moseley, as will Rams who face old foes Canterbury whilst an in-form Old Elthamians host Bishop’s Stortford, Darlington Mowden Park go to Cambridge and Cinderford take on Rotherham Titans.

Woodlands has been a fortress for current National Two North leaders Fylde this season and they will be hoping their unbeaten home record won’t be tarnished in Round 12. Warren Spragg’s side have won four of their five matches on their own turf and last weekend, Fylde were also winning on their travels. They were able to secure a crucial bonus-point victory over a spirited Luctonians outfit which means the Lancashire club remain one point clear of second placed Caldy, who do have a game in hand.

However, Fylde have to keep focused on their own tasks and this weekend, they face Hull. Gary Pearce’s men currently sit in the bottom three, but they are level on points with Preston Grasshoppers – who occupy the final safety spot. The Yorkshire club produced a fine second-half display against Sedgley Park to salvage two bonus points last week and they will be hoping to turn that into an 80-minute performance if they are to really test Fylde.

Caldy are doing all they can to heap pressure on Fylde, but they know the ball is firmly in their court as things stand. Gareth Davies’ men have won all 10 of their National Leagues fixtures this term and they do have a game in hand against Sedgley Park pencilled in for February which could prove pivotal in the title race.

For now, the Wirral outfit are continuing to churn out victories and last weekend’s hammering of Preston Grasshoppers suggests Caldy’s ruthlessness won’t be coming to an end any time soon. This Saturday, they travel to 11th placed Wharfedale and the Greens have only lost one of their last four games on home soil. Dale’s mixed form is hampering their progress this term with five wins, a draw and five losses to their name but if they were to add another victory to that record in Round 12, it would arguably be their best result of the season so far.

From the top to the bottom of National Two North and Luctonians will be looking to build on some positive performances this weekend when they head to relegation rivals Scunthorpe. The Lucs may have lost their last three matches against Otley, Sedgley Park and Fylde, but Ryan Watkins’ side have been mightily impressive in each fixture. They ran Sedge and league leaders Fylde extremely close and the bonus-points they have been able to earn means they are only three points adrift of safety.

In terms of Scunthorpe, they are still searching for their first win of the campaign. Tim Robinson’s side have lost all 10 of their fixtures and currently sit 13 points from safety, but they do have a game in hand against Chester to come. The Greens were rocked by the death of 1st XV player James Walker at the start of the month so it would be fitting if Scunthorpe were to open their account for this season with a victory on home soil.

This National Two South season continues to produce exciting results. The swapping and changing at the summit is making for a interesting battle for promotion at this early stage of the campaign and last weekend provided yet another twist.

Taunton Titans returned to pole position after fighting back from 22 points down to claim a victory against Dings Crusaders, but also because six miles away, Clifton defeated Tonbridge Juddians. Tony Yapp’s men are now two points clear of TJs and the Titans host Bury St Edmunds this weekend aiming to stay on top of the pile. The Wolfpack arrive in Somerset on the back of another excellent home win against Bournemouth, but Bury have only tasted success on the road on one occasion this season. That came at the beginning of October (v Barnes) so can the eighth-placed side double their tally on Saturday?

Tonbridge Juddians will be hoping the answer to that question will be ‘yes’ as they look to instantly bounce back in Round 12. Peter Dankert’s side fell to a 23-22 loss at Clifton last time out and only their second defeat of the season was enough to knock them off top spot.

Here are your TJ Saturday squads ahead of our games against Esher and Ash
Sadly no game for 2s as opponents have withdrawn from league
Get down and cheer #COUTJs pic.twitter.com/BCuUh30ZjV

This weekend, the men from the Slade welcome Esher to Kent and the visitors will hope to provide a tough test for the home side. Peter Winterbottom’s men were leading 13-0 at half-time against Henley Hawks last Saturday, but they were simply blown away in the second period as they fell to a back-to-backs defeats. Esher are now down to seventh in the table, but they are only 10 points off the top two and added to this, their last victory came against Taunton Titans so the Surrey-based side have all the tools to cause TJs problems.

At the wrong end of the division, there is also an intriguing fixture taking place as Old Redcliffians face Sutton & Epsom. Old Reds come into this clash four points clear of the relegation zone and one win from their last five matches has seen the Bristol outfit slide down the table, but Alex Davies’ side do have a game in hand over the teams around them.

With that in mind, they will be keen to move further away from trouble and a victory at Scotland Lane against Sutton & Epsom would see them increase the gap between themselves and the bottom three. S & E occupy a spot in the relegation places as things stand, but they are only four points behind Old Reds as they prepare to make the trip to Bristol. Jeff Parsons’ men have not won for just over a month so the Black and Whites will be hoping to stop the rot in this vital encounter.

Elsewhere in National Two South, Henley Hawks will be keen to continue putting pressure on the top two when they host Barnes and fourth-placed Leicester Lions go to Bournemouth. Meanwhile, a buoyant Clifton outfit face Old Albanian, Redruth travel to Westcliff as they aim to continue their excellent form and Dings Crusaders take on Worthing Raiders at Roundstone Lane.