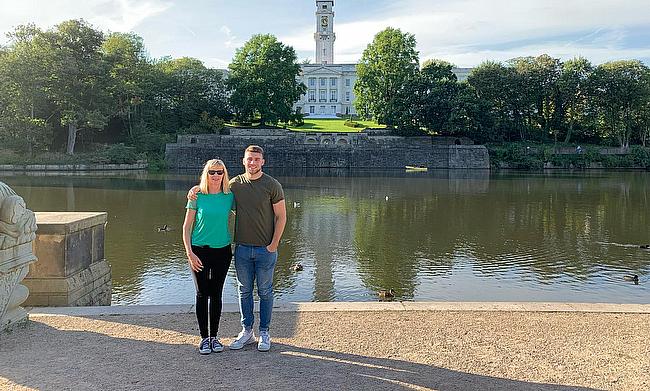 Ben Robbins has experienced the international set-up with Scotland and the National Leagues in England, but now he looking forward to the future both on and off the field.

The last few months have taught many of us that you need to find the right balance in your life between different commitments to help you thrive.

Rugby players at all levels have had a tough time since lockdown began on March 23 with various issues whether it be concern over professional contracts, a lack of motivation to train with no start dates for 2020/21 firmly in place or ‘life’ simply meaning that sport has had to take a back seat.

Ben Robbins, a former Scotland under-20 and Sevens cap, is one such player who has had to evaluate how the game he loves fits into his journey going forward, but the 23-year-old hopes he has found the perfect solution.

Over the summer, Robbins completed a Graduate Diploma in Economics at the University of Nottingham and has now relocated to London to start a job as a Trainee Broker with Freight Investor Services.

During 2019/20, he played his rugby with Rotherham Titans in National League and, going forward, the plan is to play for Richmond in the Championship and balance that with his promising career away from the pitch.

“Last summer I was at a bit of a crossroads,” winger/full-back Robbins told TRU.

“I had an Open University degree in Business Management that had taken me five years to complete alongside my rugby ambitions which I was proud of, but I thought I perhaps needed another qualification to show potential employers what I was all about.

“I chose to do the Graduate Diploma in Economics at the University of Nottingham because I wanted to test myself away from Scotland. I had been at school in Edinburgh and lived there for five years after school while playing rugby and doing my Open University degree and I saw Nottingham as something fresh.

“The course was really good while I also wanted to test myself in a different rugby environment because I had been released by Edinburgh, been involved on the fringes of the Scotland Sevens stuff and wasn’t then offered a contract. I also trained with Glasgow Warriors one Six Nations period but nothing coming from it, so I thought a change would be good.

“Studying at Nottingham and training and playing at Rotherham was perhaps not the obvious combination – I had a lot of hour long trips up the M1 – but once I settled I really took a lot from the course and although we had some tough results, the people at the Titans could not have looked after me better.

“Things came to a bit of a rapid halt when lockdown came in, but I managed to finish the course via online work and exams from Edinburgh and now I am so looking forward to getting going with the new company I am working for and Richmond – it gives me the best of both worlds.”

“It took a lot of self-discipline, but doing the Open University course was the best thing for me”

Robbins, who hit the heights in athletics in his youth, began to focus on rugby under the watchful eye of coach Ally Donaldson at George Watson’s College in Edinburgh and he played alongside the likes of Scotland cap Adam Hastings and Ally Miller (Scotland Sevens) as they won a number of trophies before he left school in 2014.

He had played with Scotland under-18s by then and was highly thought of by many observers of the game north of the border, with raw pace being a real asset.

[mpu-1] “When I left school I went straight into the Scottish Rugby Academy system based with Edinburgh Rugby and over the next three years, I was pretty busy with various rugby things such as trying to break into the Edinburgh first team, time in New Zealand, Scotland under-20 appearances, a spell at London Scottish and playing club rugby for Watsonians and then Currie Chieftains,” he explained.

“So, I could really have just focused on rugby in that time, but I always wanted to study too and although it took a lot of self-discipline, doing the Open University course was the best thing for me.

“I had to spend a lot of my evenings and weekends studying at the time when a lot of my rugby playing mates were relaxing or having down time, but it meant that come 2017 when I left Edinburgh, I was determined to get the degree finished and set-up my future without putting all of my eggs in the rugby basket.

“The next two years were a bit of a slog, training with Scotland Sevens in 2017/18 without a contract and getting a taste of life on the World Series circuit, but no more.

“Then in 2018/19, I was playing for Currie and was working various jobs as well as completing the Open University course and there were highs and lows, but we got there in the end!”

Robbins earned 14 Scotland under-20 caps in 2015 and 2016 and, in the latter year, played in the World Championship in England alongside Matt Smith as they beat Australia among others.

Back-row Smith left Glasgow early in the lockdown period and is now taking time away from the game. Last week he admitted in an interview with Rugby Pass that he had been dealing with severe depression

“I dropped Matt a message last week and it was a shock to hear what he had been going through,” Robbins stated.

“Being in and around pro rugby is definitely a bit of a roller coaster of emotions and we have to be there for each other.

“I have definitely had my ‘down’ times over the last six years, for example when I was at London Scottish and miles away from the Edinburgh matchday squad and when I was with the Sevens set-up and not really getting anywhere.

“It is easy to get into a rut mentally and start to internalise problems, I haven’t been as low as maybe Matt was feeling recently, but I definitely needed close friends and family to support me and make me realise that things would get better in time.

“When you are injured, not getting picked or quite far down the pecking line wherever you are you definitely have times where you think ‘what am I doing here, is rugby for me?’.

“It was good to hear that Matt is recovering from what he has gone through and now has a new job and goals to focus on out with rugby and for myself, it is all about finding the balance between rugby and other things and I feel I am in a good place heading into the coming season.”