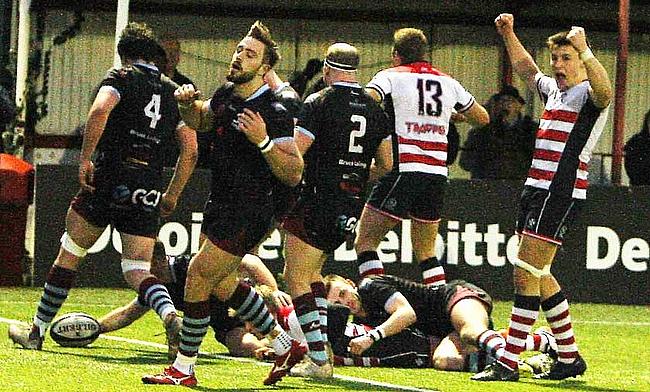 Rosslyn Park are the new leaders in National One as they beat Rotherham Titans at the Rock.

Kieran Power’s side secured their sixth win in a row, but their victory in Round 17 was made even sweeter as fellow promotion candidates Blackheath, Old Elthamians and Ampthill & District all began the New Year with losses.

‘Club’ suffered a defeat against Plymouth Albion at Well Hall and OEs were outclassed by Darlington Mowden Park while Ampthill lost to Esher in dramatic fashion.

The top four and now separated by just four points, but there was also drama at the wrong end of the division.

Bishop’s Stortford now prop up the table after losing out to rivals Birmingham Moseley and also because Loughborough Students secured a sensational victory against Caldy.

Defeats for Cambridge and Cinderford (against Chinnor and Sale FC, respectively) leaves both clubs just above the relegation places as the ever-changing nature of National One has continued into 2019.

Rosslyn Park moved to the top of National One after a clinical display against Rotherham Titans at the Rock.

Park started well and led 15-3 after tries from Arthur Ellis and Gregor Gillanders, but were pegged back immediately after the break.

Tries by Connor Dever and Connor Field, either side of an effort from Park’s Connor Hayhow, kept Rotherham firmly in the contest.

However, the hosts were able to take the game away from the Titans as three quick-fire scores through Charlie Amesbury, Greg Lound and Benji Marfo left Park in complete control.

Alex Dolly replied for Rotherham, but a further try from Joe Munro wrapped up a sixth win on the spin for Park, who are now three points clear at the summit.

Blackheath lost ground in the National One title race as Plymouth Albion put in an excellent performance to defeat the promotion candidates at Well Hall.

Albion were able to secure their fourth win on the spin in the capital as Josh Skelcey, Jordan Gott, Matt Shepherd and Dean Squire all went over before Dan Mugford’s late try stole the victory for the visitors.

Scores from Joe Tarrant, George Davis and Neale Patrick, as well as a penalty try, had put ‘Club’ 27-25 up, but Plymouth were able to clinch the victory as Blackheath slipped to their second defeat in three matches.

Darlington Mowden Park began the New Year with a superb bonus-point win over promotion chasing Old Elthamians in the North-East.

Tries from Gary Law (2), Jordan Poole and Callum Mackenzie came before the break with George Perkins replying for OEs.

Hooker Nathan Morris crossed after the interval for the away side, but his score was cancelled out by Mackenzie’s second try and a penalty from the impressive Law.

Jay Rudland-Thomas and Dom Lespierre both went over to cut the lead to 10 points, but it was too little too late as Brandon Asher-Wood’s try wrapped up a brilliant win for DMP.

The defeat for OEs leaves them three points off league leaders Rosslyn Park.

Ampthill and District were unable to maintain their momentum in the National One title race as they were beaten by Esher in a dramatic contest at Molesey Road.

Esher led 35-22 after two tries from Chris Arnold and one each for Delvin Hope, Kariym Irving and Tom James.

Ampthill’s first half points came via former Esher man Spencer Sutherland, Sam Baker, Joe Berics and a penalty try, but it was first blood to the hosts after the break.

Final score @esherrugby 49 @AmpthillRufc 48. Amazing game, fantastic effort from both sides. Good luck to @AmpthillRufc for the rest of the season.

Irving grabbed his second before Ricky Nebbett’s side were awarded their a penalty try of their own to make the score 49-22.

The A’s then mounted a remarkable response as Berics completed his hat-trick while tries from Sam Hanks and Sutherland made it a one-point game with three minutes to go.

However, Ampthill’s Gavin Williams failed to notice his side were trailing and when the clock went red, he kicked the ball out thinking they had won the contest before realising his mistake as Esher claimed the victory.

Chinnor’s Greg Goodfellow kicked a late penalty to help his side claim a narrow victory over Cambridge.

The hosts had led this contest for large portions of the game, but they trailed 24-23 late on before Goodfellow snatched the win from the tee.

With minutes remaining, Cambridge did find themselves in front thanks to tries from James Ayrton and Wade Schoeman, as well as the accurate boot of Ben Penfold, while Chinnor’s points came via Josh Hodson, Reon Joseph, Ed Hoadley and Daniel George.

But there was to be late drama as Goodfellow stepped up to clinch the one-point victory for Matt Williams’ side.

Loughborough Students are off the bottom of National One after a thumping win over Caldy.

Four tries in the first half from Callum Watson, Mark Dixon and Austin Beckett (2) gave Loughborough a 34-12 lead after 40 minutes.

Beckett completed his hat-trick after the break while further tries from Jack Moates and Thomas Smith means the Midlands club are now no longer at the foot of the division.

Caldy’s points came through Derek Salisbury, who scored a brace, while Martin Gerrard crossed in the second-half.

Wilkinson crossed for a try which he converted in the first-half and he also kicked a further 14 points as Sale clinched their first home win since the middle of November.

Both Connor Doherty and Jonty Rawcliffe dotted down in the opening period for the hosts, while Cinderford could only muster up tries from George Porter, Nathan Taylor and Sam Smith.

Chris Brightwell scored twice as Birmingham Moseley strengthened their survival bid in National One after an encouraging win against rivals Bishop’s Stortford.

George Keen touched down for the away side early on in the Midlands and Stortford continued their rhythm as Tom Banks and Seb Brownhill both went over.

Moseley were able to reply before the interval as James Williams landed his second penalty after Brightwell had crossed.

With the score at 19-13 to the visitors, Moseley woke up after the break and four straight tries from Williams, Brightwell, Sam Brown and Sam Pointon ultimately sealed an important victory for Richard Protherough’s men.

Stortford did salvage a try-bonus point following two late scores, but they now sit at the bottom of National One while Moseley remain on the cusp of safety.