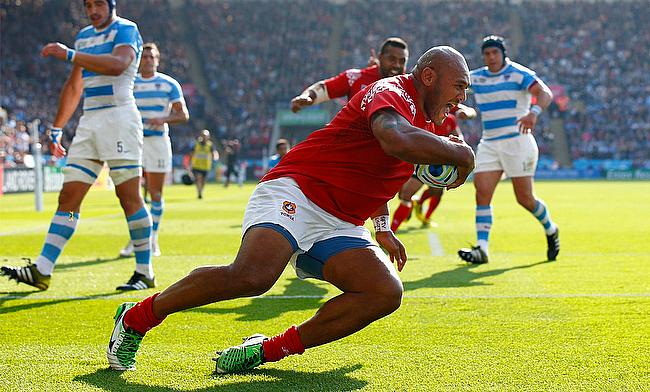 Ampthill and District’s new recruit Soane Tonga’uiha chats exclusively to Chris Heal about his move back to Bedfordshire and his career in the game.

He has become one of the most high-profile players in the National Leagues and now he is returning back “home” to join an ambitious club in the third tier of English rugby as a player/coach.

But despite his undisputable experience, Soane Tonga’uiha admits a move to National One side Ampthill and District has come at the right time in his career.

“I think it was an easy decision,” he says. “I’m 36 now so coming to Ampthill helped with what I wanted to do after rugby. It allows me to start thinking about life after rugby and it gives me time to do that.”

With respect to both Ampthill’s Dillingham Park and National Division One, it will be a contrast to the Premiership, European and World Cup stages which Tonga’uiha has experienced in the past, but the former Northampton Saints and Tonga forward is relishing being back in the county where his journey in the English game began.

“It is quite good actually,” says Tonga’uiha who started his career in England with Bedford Blues in 2004. “We spent a long time in England in both Bedford and then Northampton. My wife is from Bedford so for us moving back, it is almost like moving back home.”

Bedford and Northampton are two places which have always been close to Tonga’uiha’s heart and his rugby academy just highlights the impact the latter location has had on his career. “The Tonga’uiha Rugby Academy is based in Northampton,” he adds. “It is for kids to improve their core skills of rugby and also, it is to get new kids to try rugby. It is for kids to see that it is fun and enjoyable to play a team sport like rugby.”

Tonga’uiha will be taking his coaching up a notch with Ampthill this season, but that shouldn’t be difficult with the wealth of experience he has. His family moved from Tonga to Auckland when he was eight and after growing up in New Zealand and playing through the age grades, Tonga’uiha made the decision to depart for England.

“It was a massive step,” he says. “It was one I needed to wake up really. I got comfortable in New Zealand, but when you leave those age grades, everyone is a lot bigger than you and they are faster! I fell back and didn’t make a contract with the Super Rugby teams. Bedford came up and I joined them. I came over and enjoyed myself.”

He certainly made an impact at Bedford and after two years at Goldington Road, Northampton Saints came calling. The loose-head prop moved to Franklin’s Gardens in 2006, but for him and the club, his debut season wasn’t plain sailing. Tonga’uiha struggled to gain regular first-team action whilst the Saints fell from the heights of a European semi-final to relegation to National One [now the GK IPA Championship].

Saints restructured which meant Jim Malinder and Dorian West took up leading coaching roles and as the club began their journey back to the top – which they achieved in 2008 – Tonga’uiha sparked his Northampton career into life. He went on to make over 200 appearances for the club and also won the European Challenge Cup and Anglo-Welsh Cup as well as reaching both the then Heineken Cup Final in 2011 and the Premiership Final two years later.

“We got relegated in my first season and we had new coaches come in,” says Tonga’uiha. “They took over and created an atmosphere where everyone was happy to be hanging out with each other. They built a really good winning culture around the club. They made a massive difference. It was a shame we didn’t win the main trophies, but we were there or thereabouts. It was a brilliant and enjoyable time.”

After a whirlwind seven years with Northampton, Tonga’uiha broaden his horizons further by moving to France where he spent a total of three seasons with Racing Metro and Oyonnax.  “It was a bit different going over there! The language was a massive barrier for myself. Learning French was quite hard, but we loved the lifestyle. My family loved it and the kids are fluent in French now!”

But the lure of the Premiership, where he arguably made his name, was too much to turn down in 2016 and when Bristol offered him a contract, Tonga’uiha couldn’t say no. Linking up with Pat Lam in his final season at Ashton Gate, someone who had coached him at St Peter’s College in Auckland at the start of the millennium, was also another plus point on his return to England.

When we gradually discuss the different stages of his career, Tonga’uiha speaks of his enjoyment and pride of the experiences he has been through, but there is a moment in the interview that stands out from the rest.

“You can’t really describe the feeling,” he says. “It is a massive honour and privilege to represent not only Tonga Rugby, but you are representing the whole of the nation.”

Tonga’uiha has lined-up for his country in three World Cups with his last appearance in the tournament coming against the All Blacks at Newcastle United’s St James’ Park back in 2015. That moment would have been a special one for Tonga’uiha, but he immediately refers back to four years previous when the tournament was held in New Zealand and the quite incredible support Tonga received.

“Everywhere we went in Auckland, we’d stop traffic because our supporters would be cheering for us in the middle of the road and it would cause havoc!” he adds with a chuckle in his voice.

“That sort of support from our people lifts us and gives us that buzz. That’s what motivates you. Finance is an issue which is well known, but that aside, when we get together as a Tongan camp, we know we are there for each other and our people back home.”

Tonga’uiha will certainly get a flavour of his native country when he joins up with Ampthill over the next few weeks as amongst their ranks, they have Maama and Haloti Molitika, Paino Hehea and Aleki Lutui who have all been capped by Tonga.

The South Pacific may be Tonga’uiha’s original home but right now, he feels that he belongs in Bedfordshire with his family.  After beginning his career in this country 14 years ago, he is now looking forward to his challenge in National One.

Ampthill have firmly established themselves in the third tier since promotion in 2015 and after consistent finishes in the top four, Mark Lavery and Paul Turner’s men may well harbour promotion ambitions.

Whilst his title may be player/coach for this upcoming season, Tonga’uiha is still as enthusiastic as ever about being selected in the starting XV on a regular basis.

“I still enjoying playing! As long as my body agrees with me, I see myself as more of a player than a coach. I’d rather be out there, running around and enjoying myself than picking a team and standing on the side-lines!

“Every club wants to win the championship and be promoted no matter what league they are in. l will be bringing my experience as both a player and a coach and hopefully I can fulfill the club’s ambitions.”