In his third post for ncarugby.com, Matt Walsh dives into his time with Darlington Mowden Park and his time in the Championship with Rotherham Titans…

In my last instalment, I left you having been introduced to Danny Brown from Darlington Mowden Park where I was invited to come up to the club and get a feel for the place… I happily obliged.

The Northern Echo Area, formerly the home of Darlington Football Club, had a capacity of 25,000 (gulp) and state of the art facilities in the heart of Darlington. After being shown around [it takes a while], Danny and Newts [John Newton] relayed their ambition to me.. it was a no brainer. So I shifted to a noticeably different climate and signed for Darlington Mowden Park RFC. My first professional contract.

During the 300-mile drive to Darlo, I remember reflecting on how I had progressed as a player since university. Aside from growing up a lot mentally and physically, I couldn’t quite put my finger on it. Whilst chatting to my Dad recently we agreed I had missed out a fundamental part of my life – Sevens.

I’d been playing 7s for a few seasons socially and at competitions dotted around the UK as well as other, somewhat more salubrious, parts of the world. Sevens is a tough one to describe. As a half back, it requires a complete skill set, an ability to read the game, plus, the need to have an engine.

Defensively as well, there is no hiding. One missed tackle and that’s seven points on the wrong side of the board. I think it is precisely these parts of the game that can develop a player pretty sharpish. Once initiated, I appeared regularly across the GB Series.

One 7’s highlight was being selected as a reserve for Auckland Blues during the World Club 7s, at Twickenham.  Auckland reached the final, which was televised. There I was playing with Super Rugby stars at the home of rugby – Melani Nanai, Mitch Karpik, Mitch Hunt, Ed Fidow – the list goes on. Dad had recorded the competition just in case there was an outside chance of ‘5 minutes of fame’. Indeed there was – only for all evidence to be later deleted in Dad’s pursuit of a new BT Box! Cheers.

A second and, in truth, a far more hard-earned highlight, was winning Dubai 7s with Wyvern Harlequins. Having lost the final the previous years, we were determined to take the final step. We took it easy on the evenings out this time until the job was done properly. We went unbeaten that tournament and remember being particularly satisfied knowing we hadn’t dodged anyone through the competition . . .  Then we went out. Thank you Simon Baines, Tom Cuff-Burnett & Lou Meadows! Beers tasted good that evening.

Anyway, back to 15’s. So I travelled up to ‘Darlo’ and, after meeting key personnel at the Arena, was dropped at the house which I would share with four other players.  All very different, most speaking good English, we had just been thrown together but we got on like a house on fire! 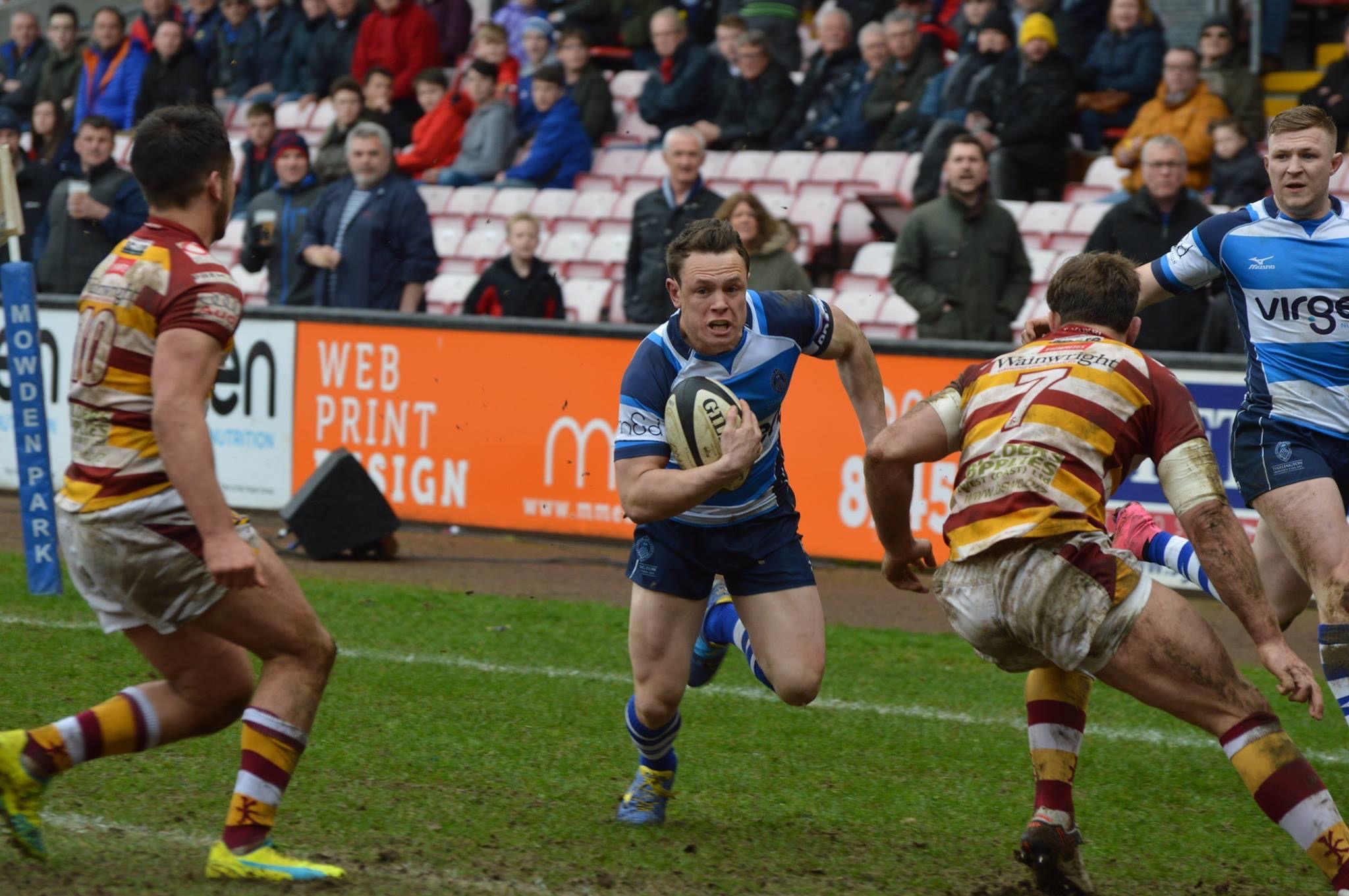 The rich tapestry of personality and experience provided an invaluable source of support, celebration, and solace throughout my very first season as a professional player. That said, training three times a day meant there was little room for any emotion other than exhaustion at times [in a good way].

The set up at the Arena was outstanding. Having only just left Cardiff Met, which was a hard act to follow in the facilities and technical departments, ‘Darlo’ delivered in spades. Such was the quality of the stadium and the backroom facilities that the Arena was chosen as the training camp for New Zealand during the Rugby World Cup in 2015.  Whilst it was an honour to have ‘All Blacks’ wandering amongst us, it also meant that we couldn’t play any home games during the RWC build up.

My first six matches in National One were all away from home, losing five of those. All the foundations and talent were there, we just needed to gel. And that we did! We lost to Richmond 22-21 at home and then went on a run of 12 wins on the bounce seeing off Ampthill, Hartpury, Coventry, Rosslyn Park and Blackheath along the way. We got stopped in our tracks again by Richmond, 14-7 at their place, who went on to be eventual winners.

Whilst we were training regularly throughout the day, I’d be lying if I didn’t acknowledge there was downtime. Wanting to make use of this time constructively, I started coaching DMP Under 14s on a Sunday morning…which wasn’t necessarily the time to find me at my best, particularly during the run of back-to-back wins, but those boys genuinely made it worthwhile. Here, I experienced another side to the DMP club; a down-to-earth, ‘take on any challenge’ commitment from the boys and girls and their respective families, just like my own junior days at Haywards Heath.

Whilst the boys and girls enjoyed the fact that the senior teams played in the higher leagues, it made no difference to them on a Sunday.  They turned up no matter what, worked hard and went home smiling, and that was just the parents!

Joking aside, the parents were simply amazing. It might be said that ‘it’s grim up north’ but in the same breath, they also tell you how friendly northerners are. Darlo was no exception. The Hickerson and Berry families, in particular, treated me like one of their own. The Berry’s would always have a place set for me for Sunday lunch and even put me up over the weekend when I returned the following year on one of my weekends off. I signed off coaching the U14’s being awarded ‘2015 Coach of the Year’ – chuffed.

I’d learnt so much during this period. I was signed as a compliment to Bruno Bravo, the other new nine, from Argentina. A scrum-half even smaller than me but with a tan, wheels and some great skills. What began as an acute rivalry for the starting position soon evolved into a strong friendship based around mutual respect and a greater understanding of the game. He taught me a lot about scrum-half play and a few life lessons about how, if you have to be away from home, to make the most of a unique opportunity and it was this attitude that got us sipping Bahama Mama’s in Mexico just a couple of months later.

I played just the one season at Darlo, one that stays with me for so many reasons.  From jumping into the deep end of structured play and high intensity training through to giving everything for friends, new and old, one being Jake Henry, who I had played with at Haywards Heath since the age of six. Having loved pretty much every minute at DMP, there was only one thing that could entice me away; A move to the Championship.

I received an offer from Justin Burnell at Rotherham Titans. I should stress, not an overly attractive offer in terms of remuneration but a firm offer, nonetheless.  Having learned a whole new way of training, preparing and playing at DMP, I had all that to undo and start again.

I arrived in Sheffield for pre-season whilst looking for accommodation with three other boys – George Tresidder, Cam Hudson and Ben Foley. Again, randomly thrown together but we hit it off. We found a house and had to select our rooms . . . Fortunately the Euros were on at the time and we picked two teams out of a hat each from the quarter-finals, the winner would get first pick, second place second pick etc. Luckily, Ben and I came out on top!

So, all settled and training hard up at the English Institute of Sport, I had to adapt again to a new intensity. First thing I got told to do was put on weight [and sort my kicking out], which is a difficult task during pre-season, one I kind of managed, but let’s just say a lot of water was drank before being weighed each morning.

I felt good, and again, was in decent shape but it took me a while to adapt to life in the Championship. I was a bit off the pace but got there eventually, just in time for the Northampton Saints pre-season game. That was an eye opener!

Like any season, I made some brilliant memories. Notable games for me were my debut – London Scottish (H), Nottingham (A) and Cornish Pirates (H) with my current teammate Will Robinson hitting a conversion from the touchline to win the game.

The away trips to Munster and Jersey etc were class but there are some long slogs in the Championship, especially the nine-hour trip to Penzance. It’s quite gruelling mentally as well as being a physical league, which can all add up sometimes.

So, the season had to conclude somewhere – London Irish, at the Madjeski, last game of the season. We had one eye on the upcoming ‘three dayer’ that weekend and got a hiding. We actually went 3-0 up! I think they were the last points we scored.

My funniest memory in rugby was that day. I remember catching an up-and-under just outside our 22m and being folded like a deck chair by Joe Cokanasiga. I got up rather slowly, looked to my right and saw two of my best mates, Pat and Will, walking late into the stadium with their beers and making direct contact into their wide eyes – their faces looked how I felt, we all knew I was in for a tough day and we just burst out laughing. Class.

Over the last two seasons, I had been thinking seriously about life after rugby and what I would do but Justin had offered me a contract extension that year which I would’ve accepted. He’d taken a chance on me and I would have bitten his hand off to build upon that year and repay the favour. However, there was a re-structuring of personnel at the club and this made my mind up for me. I wasn’t to take the contract and was to leave sunny Sheffield and professional rugby to head back home to Sussex where it all started…