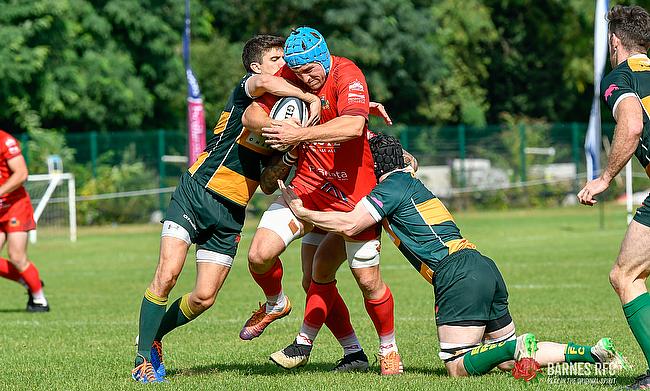 On another fascinating weekend in the National Leagues, there were changes at the top and unbeaten runs were extended. Photo Credit: (Jonathan Knight)

Cinderford are the new leaders in National One as they secured their sixth win on the spin after beating bottom of the table Plymouth Albion 36-12.

The Foresters, who are now the only unbeaten side in the division, raced into a 19-0 lead with Nathan Taylor, Reece Boughton and Harry Hone all going over for the home side.

Alex Ducker struck back for Plymouth on the stroke of half-time, but Cinderford reasserted their dominance after the break.

A Boughton penalty and scores via Joe Dancer and Will Baldwin wrapped up the win for Paul Morris’ side whilst Michael Stupple’s try on 74 minutes was merely a consolation for Albion, who are still searching for their first victory of the campaign.

The change at the top also coincided with Rams RFC’s 24-21 triumph over Rosslyn Park in a compelling contest at Old Bath Road.

In front of the National League Rugby cameras, Seb Reynolds’ side produced a dazzling first-half display to lead 24-0 after scores from Henry Bird (2) and Jamie Guttridge.

But Rosslyn Park roared back in the space of 13 second-half minutes. Ben Howard, Philip Cokanasiga and Hugo Ellis all dotted down for the visitors with Luc Smith, brother of Harlequins star Marcus, adding the extras.

“We knew they would come back at us but we deserved the win. I’m tremendously proud of my players.”

Park continued to pile on the pressure as they looked to complete a memorable fightback, but Rams were able to see the game out to leave the top three in National One separated by just four points.

Down at the other end of the division, Darlington Mowden Park clinched their first victory of the campaign with a 33-22 win over Bishop’s Stortford.

The lead swapped and changed hands on multiple occasions during the first period, but the game was level at half-time with Garry Law and Ben Frankland going over for DMP whilst Alex Rayment, Josh Stannard and Sam Bryan touched down for the away side.

A second Warren Seals penalty of the afternoon nudged the hosts in front, but Jack Scantlebury’s try put Stortford back ahead.

However, it was DMP who were able to show the cutting edge needed to win this tight contest as a quick-fire brace from Will Jones and another three points from Seals clinched a welcome victory for the home side.

Elsewhere in National One, the boot of Ben Jones helped Caldy earn a 27-27 draw with Chinnor at Paton Fields, whilst doubles for Dan Birchall and Tom Walsh saw Sale FC secure their third win on the bounce after they beat Taunton Titans 53-28.

Meanwhile, Birmingham Moseley defeated Tonbridge Juddians 34-21 and Ben Brownlie was on target again for Cambridge as they edged past Blackheath 15-9.

The first half certainly wasn’t as one-sided as the second, with Nathan Bailey scoring for Blaydon to add to two Nathan Horsfall penalties.

Sedge did lead 24-13 at the break as they sealed the bonus point through Tom Ailes (2), Will Lees and Andy Riley, and after another three points from Horsfall, the visitors decided to grab the game by the scruff of the neck.

Scott Barrow’s side are sitting on top of the pile by virtue of ‘Points Scored’ after Rotherham Titans defeated fellow title candidates Hull Ionians 27-24 in an entertaining contest at Brantingham Park.

Tries from Richard Hayes, Callum Bustin and Theodore Nwoshu-Hope saw the Titans hit back in the second period and it was enough for them to clinch their fifth win of the season.

Ben Bell and Matt Drennan had traded first-half scores but soon after, Jack Townend gave the I’s a 12-point advantage at the interval.

66 points on the road yesterday!
Scrappy game, loads to keep working on!

Get down and support the boys 👌🏻

But Rotherham mounted a comeback to help them to victory, with George Mewburn’s late try sealing a losing bonus-point for the hosts.

Hull’s excellent start to the season continued in Round Six as they defeated Loughborough Students 26-19 at Chanterlands Avenue.

The hosts did lead 12-0 after 20 minutes thanks to a penalty try and a score from Duell Trueman, but Loughborough responded before the break as Will Sanders and Jonathan Law both crossed.

Gary Pearce’s boys then regained control of the scoreboard by adding two tries of their own through Cameron Breen and Stephen Johnson.

The home side then had Cameron Curry and Latu Makaafi in the sin-bin for the last 10 minutes, but the Students could only manage a Matteo Petrozzi try as Hull held on for another home triumph.

Meanwhile, hat-tricks were a common theme at Woodlands and Stourton Park as Fylde’s Tom Carleton grabbed a trio of tries in his side’s 48-18 win against Wharfedale whilst Jack Lea and Arthur Morgan both scored three times in Stourbridge’s 61-22 victory over Huddersfield.

Elsewhere, Sheffield Tigers produced a rousing comeback to beat Bournville 19-17 whilst Chester held off a stubborn Tynedale outfit to sneak a 22-21 win.

Will Beer and Conor Slevin scored first-half tries for the Raiders, with Dings replying through Harry Rowson and Josh Lloyd.

After half-time, Lloyd’s second try gave the Crusaders some momentum and scores from Tom Hargan and Josh Wood – either side of a McLean penalty – put the hosts eight points ahead.

But tries from replacement Henry Birch and the superb McLean proved to be enough for Worthing to continue their strong start to the term.

Redruth are just three points off the table-toppers as National Two South’s only unbeaten side made it five wins from five after beating Clifton 49-12.

The Reds showed their quality at The Recreation Ground, running in eight tries, with Jack Oulton and Connor Gilbert both scoring twice.

What an atmosphere at ⁦@RedruthRugby⁩.

The visitors also had Marcus Nel sent off on the hour but in truth, the damage was already done as Redruth march on.

In National Two South’s featured game of the weekend, Hinckley claimed their first win of the season as Rory Vowles scored a hat-trick in a 66-5 triumph over Westcliff.

The Hornets ran in tries through Vowles, Andrew Weaver, Adam Johnson and Adam Nunney to lead 28-0 at half-time.

They extended their advantage through another Vowles score, plus efforts from Joe Wilson and Josh Smith, before Westcliff got themselves on the board thanks to Tyler Ford.

Back towards the top of National Two South, Guernsey Raiders secured their fifth consecutive victory as Charlie Currie’s late try helped Jordan Reynolds’ men to a 26-19 triumph over Barnes.

For all of the reaction from Round Six, subscribe to The National League Rugby Review Show…