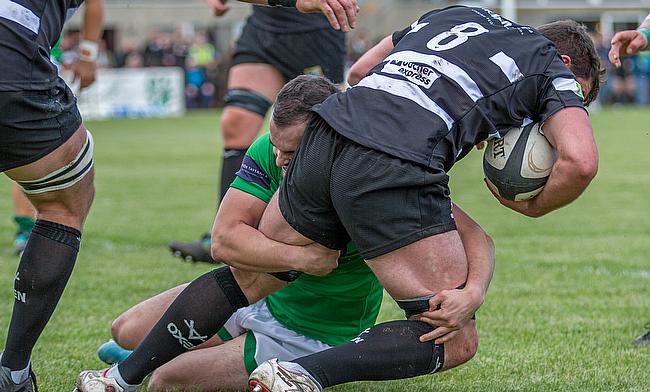 Otley and Huddersfield secured their first victories of the season after the Yorkshire clubs beat Hinckley and Scunthorpe, respectively in Round Five. (Photo Credit: John and Ro Burridge)

Late penalties from Joe Rowntree and Will Milner clinched the wins for both teams on a Saturday of tense finishes in National Two North.

Second-placed Fylde had to fend off a late resurgence from Tynedale as did Loughborough Students at Sheffield Tigers whilst Sedgley Park snatched a victory at the death against Stourbridge.

Wharfedale also had to survive late pressure from Preston Grasshoppers whilst there were no such problems for league leaders Caldy who produced a scintillating second-half display to defeat Luctonians.

Elsewhere, Chester were able to extend their winning run to three matches with a tight victory over Hull.

On 35 minutes, Lucts were only 15-10 down thanks to a converted try and penalty from Josh Phipps whilst Caldy’s lead came through Josiah Dickinson, Gavin Roberts and Nick Royle.

But the Wirral outfit extended their advantage just before the break as Rhys Hayes and Royle dotted down before Caldy dominated in the second-half.

Royle completed his quadruple of tries in the final 12 minutes with Martin Gerrard, Adam Aigbokhae and Roberts also crossing to wrap up the win.

Fylde are still on the heels of table toppers Caldy as they maintained their unbeaten start to the season away at Tynedale.

However, the Lancashire side had to come from behind as Tom Grimes’ early try along with Greg Smith’s penalty was cancelled out by two Ben Bell scores and a penalty from Rob Parker.

But the visitors scored 24 unanswered points after the break as Grimes completed his hat-trick whilst Elliot Horner and Tom Carleton also cashed in.

Tyne did mount a late comeback as John Clarkson and Will Roberts touched down, but Fylde held on for their fourth win of the term.

Sedgley Park came from behind to snatch a dramatic win against Stourbridge thanks to Mark Goodman’s late try.

The flanker rumbled over right at the death to give Sedge their fourth win of the campaign and Scott Barrow’s side are now third in the league standings.

Jamie Harrison dotted down on two occasions for the visitors whilst Steve Collins kicked 13 points to help Sedge to victory.

Stour were ahead for 75 minutes of this contest thanks to tries from Dan Rundle, Jack Lea and Nigel Mukarati with Chris Scott landing 10 points from the tee.

However, the fly-half did miss a penalty when Stour held a 25-21 advantage and the hosts were punished by Goodman’s late score.

Chester’s Colin Campbell scored the only try of the first period to give the hosts a 7-0 lead, but the in-form Latu Makaafi crossed for Hull shortly after half-time.

However, the Yorkshire outfit were unable to add to their total despite creating a couple of opening and seeing two penalties hit the woodwork.

Instead, Vare’s score in the final 10 minutes clinched another win for Jan van Deventer’s men.

Wharfedale stood strong in defence to hold out Preston Grasshoppers and seal their second win on the spin.

FT (4-1) @wharfedalerufc 20 – 19 @RugbyHoppers
Hoppers take the 2nd half but we hang on for a thrilling win.
Full credit to 2 very committed sides#nat2n

The Preston full-back doubled his tally after the interval and Tyler Spence’s effort brought the Lancashire outfit back into it with over 20 minutes still to play.

However, the hosts were able to repel the attacks from Hoppers as they saw out the victory which lifts them to sixth place in the table.

Loughborough Students held off a spirited Sheffield Tigers fightback to grab their second victory of the National Two North campaign.

The Students had a decent cushion at the break as Will Kaye, Will Brown and Joe Browning all crossed to give Loughborough a 19-9 advantage.

Jonathan Law’s effort for the visitors was matched by a score from Jamie Broadley, but when Loughborough were awarded a penalty try, they were seemingly in complete control on 56 minutes.

Owen Waters also crossed to stretch their advantage to 24 points, however, a frantic six-minute spell set up a tense finale.

Jack Redfern-Brown, Greg Mellor and Broadley all crossed but the Tigers couldn’t complete a dramatic fightback and had to settle for two points whilst Loughborough clung on to the victory.

Otley secured their first victory of the campaign as a late Joe Rowntree penalty sealed a battling win against Hinckley.

After two draws and two defeats to begin the season, Otley were staring at another winless Saturday when Hinckley’s Mitchell Lamb crossed eight minutes from time.

The Yorkshire club had led 14-7 at the break as Simon Willet and Joe Graham responded to Ben Pointon’s score, but Otley were able to fashion one more opportunity as Rowntree kept cool to land a match-winning penalty.

Will Milner kept his nerve to kick Huddersfield to their opening win of the National Two North season against Scunthorpe.

The hosts led 15-12 at half-time after tries from Nick Sharpe and Elliot Knight, as well as a Milner penalty, wiped out Will Harrison’s brace.

Scunthorpe’s Will Scammell and Oliver Cole both went over to put the Greens 24-15 ahead, but Huddersfield hit back.

Liam Parfitt’s try cut the deficit to two points and when Milner missed a penalty on 73 minutes, Field may have thought the chance had gone.

However, Scunthorpe’s indiscipline was punished as Milner regathered himself to ping over a penalty to snatch the victory for Gareth Lewis’ side.