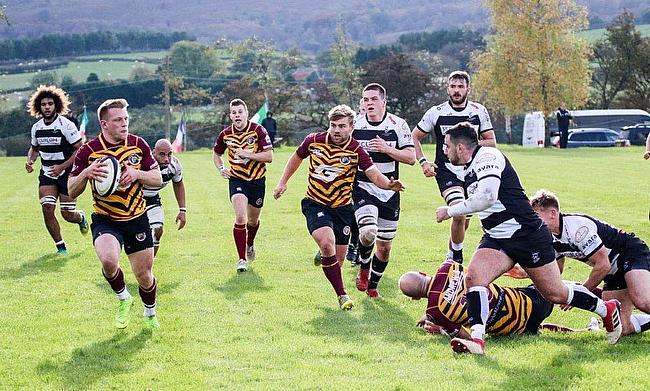 Fylde’s top two aims suffered a dent in Round 15 as the second-placed side were beaten by Sheffield Tigers. Photo Credit: (Francis Morris)

Warren Spragg’s charges are eight points behind Caldy, who extended their sensational winning run to 14 matches after dispatching Stourbridge, but Sedgley Park are now breathing down Fylde’s necks.

Sedge hammered Scunthorpe to move to within four points of the Lancashire club , with a game in hand, whilst down at the bottom, Luctonians are out of the relegation zone after securing a potentially crucial win over Huddersfield.

Field are now in the bottom three along with Preston Grasshoppers and Paul Arnold’s side played out a remarkable 0-0 draw with Otley.

Caldy marked the halfway point in the National Two North season by securing a 14th successive victory of the campaign as they thumped Stourbridge.

The table toppers had eight different try scorers at Paton Field, with John Parker, Cameron Davies, Tom Sanders and Adam Aigbokhae all going over in the first period.

Rhys Hayes, Ed Stagg, Ben Jones and Nick Royle wrapped up another superb display by Caldy, whilst Dan Rundle’s effort was the only response Stour had to the relentless league leaders.

Fylde’s top two aspirations were dented after they fell to a defeat away at Sheffield Tigers.

Warren Spragg’s side are now eight points behind leaders Caldy, but the Lancashire club are only four points clear of third-placed Sedgley Park.

First half tries from Tom Grimes and Ben Gregory had given Fylde a 10-6 advantage, but the Tigers fought back in the second period.

They did have to wait until the final 10 minutes to complete the turnaround, though, as Jamie Broadley capitalised on yellow-cards shown to Ben O’Ryan and Gregory to dot down before Mark Ireland landed his third penalty of the afternoon to seal the win for the Yorkshire outfit.

Glasse’s first try came on 27 minutes after Elliot Crowe had opened the scoring before Leon Simpson touched down before half-time.

Black (2), Rob Holloway, Bob Birtwell and Callum McShane completed a dominant display from Sedge, who certainly profited from two Scunthorpe yellow-cards and a red shown to Jacob Hardy in a six-minute window during the second half.

Ethan Heath-Dury scored Scunthorpe’s only try to make it 7-7 in the first period, but the division’s bottom club had no answer to Sedge as the Greens remain without a victory this term.

Loughborough Students bounced back from their defeat to Huddersfield in style as they thrashed Tynedale in the Midlands.

Both Will Brown and Bamidele Fadahunsi scored hat-tricks for Students whilst Will Kaye grabbed the other for the rampant hosts.

Chester extended their unbeaten run to six matches in National Two North as they clinched a late victory over Hinckley at Hare Lane.

The hosts, who haven’t lost since the end of October, were staring at a defeat when they trailed 18-12 with eight minutes remaining.

Will Cave’s score and 13 points from the excellent Joe Wilson had given the Hornets the advantage, but Harrison Vare’s second converted try of the afternoon snatched the victory for Chester.

Mike Craven went over for the hosts’ other score with all of Chester’s tries coming in the second period.

Hull secured their fourth victory on the spin with this battling win over Wharfedale.

Jack Blakeney-Edwards kicked two first-half penalties for Dale to leave it 6-0 at the break, but the home side hit back after the restart.

A brace from Latu Makaafi inside eight minutes turned the game in Hull’s favour, but the boot from Blakeney-Edwards kept Dale in the contest.

However, Hull decided to the turn the screw and went close on a couple of occasions and despite Wharfedale’s best efforts to hit back, the hosts held on for another triumph.

Otley and Preston Grasshoppers played out only the second 0-0 draw in the history of the National Leagues at Cross Green.

Otley and Preston Grasshoppers played out a nil-nil draw in National 2 North yesterday – only the second scoreless draw in the history of the National leagues after Maidenhead and North Walsham drew 0-0 in National 4 South on 17 November 1990.

Otley looked the most likely to break the deadlock in the first quarter, but even when Hoppers were reduced to 13 men at one stage, Preston’s excellent defence refused to be breached.

The visitors put pressure on their hosts in the final 10 minutes, but their patience wasn’t to be rewarded as both sides shared the spoils in Yorkshire.

Luctonians have once again moved out of the relegation zone in National Two North as they edged past rivals Huddersfield in a hard-fought contest.

Tries by Drew Cheshire and Aiden Cheshire were enough for Lucs to leapfrog Huddersfield and the win leaves them one point clear of the drop.

Field had led this contest 10-8 as Will Milner’s penalty was added to by Josh Crickmay, but after an excellent win over Loughborough at the start of the month, the Yorkshire club were unable to back it up in Round 15.