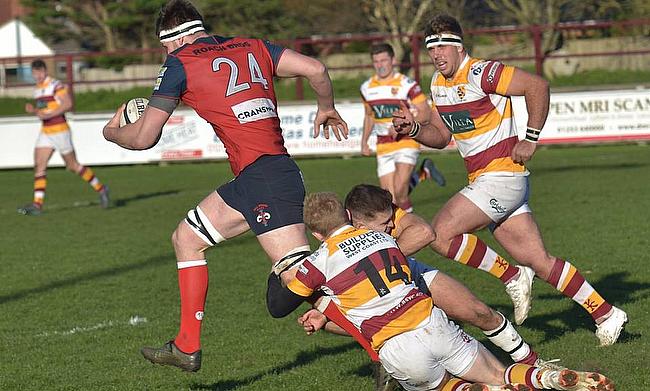 Hull Ionians picked up a bonus-point win over fellow promotion contenders Fylde to return to the top of National Two North.

After three straight defeats, Martyn Wood’s side responded in the best way possible by beating one of their rivals and the I’s are now one point clear at the summit.

Defeat for Fylde has seen them drop to fourth in the table and they are only two points behind the leaders, but the teams above the Lancashire club all have games in hand.

Second-placed Chester are now level on points with Hull Ionians following a dramatic draw away at Stourbridge, while Huddersfield (3rd) are only one point off the top after edging past Hinckley.

Otley’s hopes of finishing in the top two were dented slightly as they were beaten by Tynedale away from home while Preston Grasshoppers’ fine season continued with a victory over Sheffield Tigers.

Down at the wrong end of the division, the bottom three sides all lost as Peterborough Lions, Macclesfield and South Leicester fell to defeats against Sedgley Park, Leicester Lions and Wharfedale respectively.

Hull Ionians have returned to the summit of National Two North following a bonus-point win over promotion rivals Fylde at Brantingham Park.

A first-half try from Ben Stephenson and two penalties from Lewis Minikin helped Hull Ionians into a 13-10 lead at the break, with Connor Wilkinson going over for Fylde.

Toni Kuku dotted down to extend Hull’s lead, but Fylde stayed in touch when Tom Carleton crossed on the hour.

However, the hosts won it with scores from Adam Brown and Minikin while Thomas Grimes’ late effort proved to be just a consolation for the away side.

Tries from Llyr Griffiths and Dan Rundle (2) gave the hosts a 19-12 lead at half-time, with Tom Foden and Shay Owen dotting down for Chester.

Immediately after the restart, Hal Riley increased Stour’s advantage to 18 points, but Owen’s second score kept the home side within Chester’s sights.

As the clock ticked down, Stour looked like they had done enough to win it, but Morris’ extras from Michael Craven’s late try snatched a share of the spoils for Chester.

Huddersfield are now just one point behind league leaders Hull Ionians as they clinched their seventh victory on the spin against Hinckley.

Harry Whitfield scored an early try for the visitors and a penalty from Chris Johnson put Field 10-5 up at the break, with Callum Dacey replying for Hinckley.

The away side burst into life after the interval as a brace from Lewis Workman gave Huddersfield a 24-5 lead.

However, two quick-fire scores from Alex Salt and Craig Bresland cut the deficit to five points with 10 minutes remaining.

Johnson landed a drop-goal for the visitors before being yellow-carded and despite a late try from Dacey, Hinckley were unable to keep their unbeaten home record intact as Huddersfield clinched an important victory.

Morgan Passman’s try put Tyne 5-3 up in a cagey first half at Corbridge, but the game sparked into life just before the hour.

Match Report from Saturday’s 1stXV match against Otley is available on Club’s website:-https://t.co/lPhhiLZd4F

Passman completed yet another hat-trick for the hosts while Chris Wearmouth also crossed as Tyne raced into a 22-8 lead.

However, Otley produced a remarkable fightback in a four-minute spell as England U20 international Tom de Glanville and Ben Magee both crossed to level the game.

But on 76 minutes, Ouston nailed his penalty to give Tyne a fifth win from their last six games.

Sedgley Park picked up a welcome victory in Round 23 as they beat bottom of the table Peterborough Lions away from home.

In terms of the Lions, they are now 25 points from safety with eight games to go in their season.

The visitors ran in three tries before the break as Steve Collins, Andy Riley and Rob Holloway all crossed, but the home side only trailed by five points after scores from Ben Young and Suva Maasi.

The hosts were able to level up the contest immediately after the break as Thomas Dougherty dotted down, but that was as good as it got for the Lions.

Danny Maher and Sam Lowthion both touched down in the second period to secure a much-needed win for Sedge after successive defeats, while time is running out for Peterborough Lions.

Preston Grasshoppers held on to beat Sheffield Tigers in an entertaining contest at Dore Moor to record their third win from their last four matches.

Alan Symcox’s try put the Tigers in front, but a penalty from Thomas Davidson plus scores via Ryan Carlson and Scott Jordan gave Preston a 12-point lead.

Their advantage was cut before the break as Will Wallace went over, but another penalty from Davidson and a try from James Gough kept Hoppers in control.

However, the hosts fought back as quick-fire scores from Pete Swatkins and Tom Hart made it a three-point game with over a quarter of the match remaining, but Preston were able to see out the win in Yorkshire.

A brace from scrum-half Sam Gaudie helped Wharfedale secure their fourth consecutive win as they picked up a bonus-point victory against South Leicester.

The visitors, who are currently in the bottom three, found themselves 15-12 up following tries from Will Cave and Javiah Pohe while Dan Glasse also pinged over a penalty.

Dale’s points had come through Gaudie and Harry Bullough, with the former giving his side the lead shortly after half-time as he crossed for his second score of the afternoon.

South hit back on the hour as Timo Koster powered over to make it 20-20, but Dale were able to take full control of the final quarter.

A penalty from Jack Blakeney-Edwards kicked things off before tries from Louis Brown, Joseph Metcalfe and Oli Cicognini handed the hosts the victory.

Leicester Lions were able to increase the gap between themselves and the bottom three to 15 points following a narrow win over relegation-threatened Macclesfield.

Andy Key’s side led early on thanks to an Ed Sumpter try while Devon Constant and Oliver Taylor also crossed to put the Lions 19-12 up at the interval.

All the action from the trip to @leicesterlions1 including this pearler from @JonnyMason789 helped by Tom Mantell but for the full video see our Facebook page or this link https://t.co/66nWHJDrTV #maccrugby #maccrugbytv pic.twitter.com/bUMusVjUcC

Sam Moss and Jonathan Mason touched down in the first period for Macc and the visitors levelled the game up soon after half-time as Josh Redfern went over.

But, the key moment in the match came 13 minutes from time as Sam Benjamin dotted down to clinch a first win in February for the Lions while Macclesfield are now 20 points from safety with eight games left in their campaign.