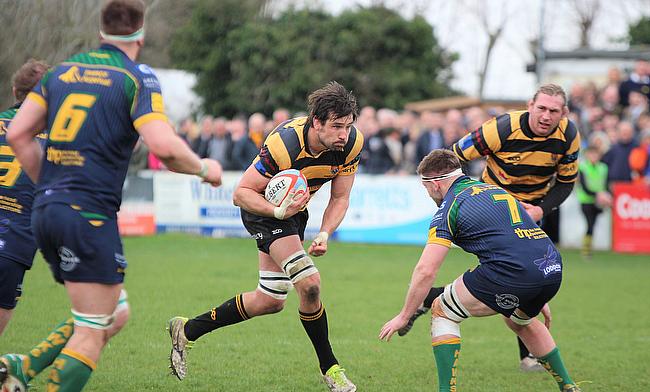 Corker will be part of a Canterbury side that takes on Chester in the National Two Play-off at the Marine Travel Ground.

The former Wasps and London Welsh man has a wealth of experience under his belt and Corker is now keen to add promotion to National One to his achievements.

“This season will probably be my last season as a front-line player so this could potentially be one of my last games,” Corker told ncarugby.com

“It is such an important game for a club which has just been so good to me. It is a massive opportunity for me to give back to the club that have got a really special place in my heart now.”

The biggest day in the Clubs history is nearly here. We are ready to welcome Chester RUFC to the Marine Travel Ground. We have 4 bars, 4 different food outlets, a team of volunteers ready to welcome people. Entry is £10 per person but under 18s are free. pic.twitter.com/Tt8ExX8dzl

Corker added: “Winning anything is such a phenomenal feeling. I do coach a lot of kids now and it is not all about winning, but achieving things and the things I have achieved in my career make me feel very proud.

“When I stop and think about them when I talk to other people, I could have played for 12 years and not be able to say those things, but I can and that is something I am proud of.”

Saturday’s match has been billed as ‘the biggest game in Canterbury’s 90-year history’ and Corker has been part of their journey for the last two seasons.

After his time as a professional came to end, Corker moved to Richmond before joining the City Men and he believes his decision to link up with Canterbury helped reignite his love for the sport.

“I think when you are in a full-time environment and you get slightly aged, you more towards the periphery of the club,” he said.

“I was lucky to have a year at Richmond which really invigorated me and I then moved to Canterbury. Just coming into an environment where people love rugby, it is just so refreshing. It helped me fall in love with the game again.”

Corker has certainly played his part in Canterbury’s excellent season and after finishing 10th last term, the forward feels belief has been key to their success this year.

“The season is a really long season and it is a real test of your perseverance,” he added. “The boys have just bought into the environment and wanted to achieve something for themselves, for the club and for the group.

“I think that has been the heart of the success for me because a lot of our wins haven’t always been pretty so a lot of it is down to hard work and backing ourselves.

“By building the belief in a group of players, you can go on to achieve things that you never thought were possible. Because the boys have believed in themselves and what we are doing, there have been situations we have been in where we probably didn’t have any right to win, but we did because we played for the full 80 minutes.”

Earlier this week, Canterbury head coach Andy Pratt told ncarugby.com that two moments in the campaign standout as turning points for the City Men on their way to securing a play-off spot.

A late victory away at Guernsey in November and an excellent win over rivals Henley Hawks were highlighted by Pratt and Corker echoed those choices.

Someone will make history on Saturday afternoon, but who will it be?@cantrugby or @RUFCChester? 🤔

“I am not great with league tables!” he said. “I’m a bit more week by week, but I know we beat Henley away just before Christmas and that put us second. That was a massive game for us and I think that, coupled with our win at Guernsey, standout.

“Guernsey away is a tough day because you get up and you’re on the plane at 7am after staying in a hotel at Gatwick.

“Logistically, it is a challenge. We didn’t have a great game, but we scored a really late driving maul try and sometimes its just about getting that job done and that is something the boys have really responded to.”

Following on from the victories over Guernsey and Henley Hawks, Canterbury did suffered defeats at Tonbridge Juddians and Dings Crusaders but the City Men responded emphatically and 11 straight wins guided them to second place in the division.

Now, Andy Pratt’s side sit on the verge of an historic promotion and Corker is one of the Canterbury players to have  experienced big occasions in his career.

He knows what it takes to get over the line and the lock insists Canterbury must maintain their focus and not ‘reinvent the wheel’ if they are to achieve success against a strong Chester outfit on Saturday afternoon.

He added: “I will definitely try my best to give the boys some pearls of wisdom if I have got any!”

“You’ll have to ask the boys but it might be nice for them to potentially have someone who has been in these sorts of situations because it is very easy to let the occasion pass you by because you get a bit excited and over-hyped.

“They are great days in your life and I wouldn’t want any of the boys to miss the enjoyment that there is on these occasions. I think that would be the message I would give.

“It is very important to think like it is still another game of rugby. Nothing changes. The important thing for any team in this situation is to think we are here because of what we have achieved since we started pre-season.

“It is those weeks that have got us here and we don’t need to change anything now. If you start to force it, that’s when you put pressure on yourselves.

“It is not about reinventing the wheel. It is about being the best version of Canterbury RFC we can be going into a really competitive fixture with a great opportunity to play in the league above.”

Ahead of the National Two play-off, take a listen to our latest NCA Rugby Podcast plus stay tuned across our social media as we will be bringing you live commentary from Canterbury on Saturday.