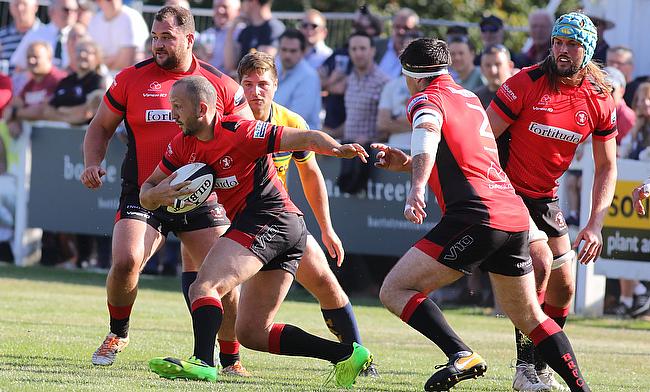 After a difficult week for Bournemouth, the Lions were able to spark their National Two South season into life by beating Westcliff. (Photo Credit: Steve Karpa)

The Lions parted ways with Director of Rugby Will Croker after a tough start to the campaign for the newly promoted side but Bournemouth were able to open their account in Round Six.

At the right end of the table, Tonbridge Juddians’ supreme form continued as they comfortably beat Worthing Raiders whilst Taunton Titans are back in the top two after narrowly defeating Old Albanian.

Clifton are up to third after they triumphed over Bristol rivals Old Redcliffians and also because Henley Hawks had to settle for a share of the points against Redruth at Dry Leas.

Elsewhere in the division, Esher brushed aside Sutton & Epsom, Leicester Lions beat Barnes and Bury St Edmund maintained their purple patch of form as they saw off Dings Crusaders.

TJs have not lost a league game since January and their 100 per cent record this term was maintained in Sussex.

First-half tries from Hugo Watson (2), Ryan Jackson and Finlay Coxon-Smith contributed to a 24-3 lead at the interval.

Charlie Edwards and Noah Ferdinand both scored in the second period to complete a good afternoon of work for TJs, whilst Worthing’s only try came via Calum Waters.

Taunton Titans have moved back into second spot in National Two South as they edged past a spirited Old Albanian outfit.

Jamie Townsend crossed early for the visitors, but Taunton forwards Charlie Williams and Isaac Dalton both touched down to give the home side the lead.

However, the scores were level at the break as Alessandro Ricci scooted over for OAs.

The Titans flew out of the blocks after the restart as tries from Jack Arnott and Tom Wyatt (2) saw the hosts surge into a 33-19 lead.

OAs’ Michael Bond swapped tries with Williams before the away side mounted a late fightback.

Oliver Stonham and Harry Betts both crossed either side of a Dan Watt penalty to cut Taunton’s lead to 38-36, but the visitors had to settle for two bonus-points as Taunton saw out the win.

Clifton are up to third in the National Two South standings as they defeated Bristol rivals Old Redcliffians at Scotland Lane.

Old Reds have failed to win a derby match since January 2018 and their wait for the bragging rights goes on after this latest loss.

After the break, touchdowns by Mitch Spencer and Harry Bates was enough to seal a hard-fought victory for Matt Salter’s side who continued their strong start to the campaign.

The hosts’ scores came through Luke Rapson and Dan Fry, but it wasn’t to be a third straight win for Alex Davies’ men.

Fraser Honey kicked a late conversion to earn Redruth a draw against Henley Hawks which completed a storming comeback at Dry Leas.

The hosts went ahead when Tom Emery crossed on the stroke of half-time, and they led 20-6 when Sam Lunnon and Emery both went over in the second period.

Bradley Janes got the visitors back into the game on 72 minutes and in the final knockings, replacement Richard Brown dotted down.

Honey, for the second week running, kept his cool as the Reds secured a share of the spoils at the home of one of the promotion hopefuls.

Esher clinched their fourth win from their last five games as they sealed a bonus-point victory over Sutton & Epsom.

The away side were awarded a penalty try in the first-half and Joe Beckett also touched down whilst Cameron Gentles, Cam Leigh and Tristan Roberts added scores in the second period.

Ed Sumpter scored a brace as Leicester Lions earned a hard-fought win over Barnes in the Midlands.

The hosts restricted the visitors to three Josh Hammett penalties as Gareth Collins’ side bounced back from their Round Five defeat against Esher.

The lock bounded over for his second on 46 minutes and despite Hammett’s third penalty which kept Barnes in touch, the hosts delivered the decisive score just after the hour as Devon Constant touched down.

Both sides were awarded penalty tries in this contest with Bury’s Kodie Drury-Hawkins and Dings’ Steve Plummer exchanging kicks from the tee.

The scores were still level at 10-10 heading into the final 15 minutes, but the Wolfpack ultimately had the final say as Dan Walsh dotted down to continue Bury’s excellent recent form.

Bournemouth picked up their first victory of the National Two South season after an impressive display against Westcliff.

Fantastic day in the rain. Great effort from every single player on the pitch @bournemouthrfc 39 @westcliffrugby 12 #Greatjob

Winger Dan Stewart started and ended the try-scoring for Bournemouth whilst Alex Everett-Bolter, Fred Gleadowe and Sam Hardcastle all scored to seal a bonus-point triumph for the Lions.

Westcliff’s tries came via Ewan Binneman and Chris Marsh, but their wait for their maiden victory at this level continues.