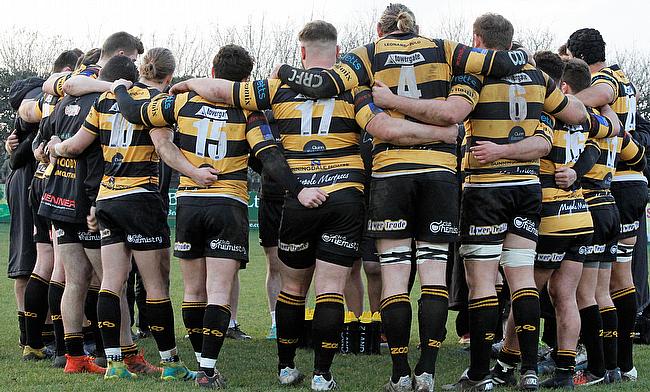 Canterbury scored six tries to record a comfortable and important National Two South win against Birmingham and Solihull at the Marine Travel Ground.

The City Men produced a solid display to tighten their grip on second place and Andy Pratt’s side will stay in the play-off position heading into March.

There was also no mistake from Canterbury’s rivals as Tonbridge Juddians, Taunton Titans and Henley Hawks all picked up victories in Round 23.

It was business as usual for Rams RFC too as they returned to winning ways against Old Redcliffians at Old Bath Road. The league leaders have also surpassed the 100-point mark with seven games remaining in their season as Seb Reynolds’ side took another step towards the title.

Elsewhere in National Two South, Barnes picked up a much-needed win over Dings Crusaders as they look to secure their status in this division for another season and Clifton edged past London Irish Wild Geese while Old Albanian and Worthing Raiders had to settle for a draw.

Rams RFC returned to winning ways in style as they defeated Old Redcliffians to move past the 100-point mark for this season in National Two South.

The Berkshire club have now racked up over a century of points this term and they set the tone for their latest victory in a blistering first 40 minutes.

An interview from Seb Reynolds Head Coach of RAMS Rugby.? Who discusses @Rams_RFC performance against @OldRedsRFC ?⚫️ at Old Bath Road today.?The Rams played some excellent rugby throughout with many individual brilliance’s across the team.?❗️@nca_rugby pic.twitter.com/MyHqPEalGN

An early penalty try was followed by scores from Ross Crame, Conor Corrigan and Ellis Jones as the Rams led 24-0 at half-time.

The league leaders added to their tally shortly after the break as Joe Duffelen dotted down, but Old Redcliffians then dominated the scoreboard for the remainder of this contest.

Henry Bird, Scott Coster and Jermaine Jones all crossed for the visitors, but the damage had been done in the first period as Rams maintained their 12-point lead at the top.

Canterbury scored three tries in either half as they stayed in control of the play-off spot in National Two South following a bonus-point win over Birmingham and Solihull.

Tristan King claimed Canterbury’s first try of the afternoon on 11 minutes before Oli Best and Sam Sterling both crossed to give the City Men a 19-9 half-time lead.

But, Birmingham and Solihull couldn’t add to their three penalties from Jack Jolly as the City Men increased their own tally.

Dan Smart, Ricky Macintosh and Sterling all dotted down to wrap up the win for Canterbury, who remain seven points clear of the chasing pack.

The visitors were scintillating as they scored three tries in the opening 20 minutes through Duncan Tout and Edwards (2) before George Shannon replied for Guernsey.

TJs were able to add a further score before half-time as Edwards completed a superb hat-trick to make it 28-5 at the break.

Guernsey rustled up a response after the restart as both Patrick Schickerling and Shannon went over, but TJs wrapped up their sixth win in a row when Finlay Coxon-Smith crossed on 78 minutes.

Following a try from Connor Baker which Kingdom converted, the full-back had the chance to clinch a vital win for the Titans and he duly delivered in the dying embers of this contest.

Great crowd at the #haberden today cheering on our #Wolfpack not the result we wanted and so close, leading for almost the entire game, great home supporters we couldn’t do it without you all #bserugby #supporters #homegame #homecrowd #localsport #rugby #greeneking #IPA pic.twitter.com/Cr5v755X0V

The hosts led at half-time with tries from Ben Leng and Alex Stanley, while Jarrard Hayler went over for the Titans.

Taunton reduced the deficit to one point when Max Woodward dotted down, but when Alex Grey darted over for Bury, it looked as though the home side were on course for victory.

However, Baker’s effort was soon followed by Kingdom’s penalty as Taunton rescued a potentially vital win in their bid to finish in the top two.

Henley Hawks produced a brilliant first half performance which set the platform for their victory over Redruth at Dry Leas,

A score from Richard Brown just before hour cut Henley’s lead to four points, but despite a spell of pressure following that try, the Reds couldn’t add to their tally as the Hawks held on for a crucial victory in the race for the play-off spot.

Clifton fought back from 21-13 down against London Irish Wild Geese to return to winning ways in National Two South.

The hosts led this contest 14-13 at the break following two first-half tries, while Will Pomphrey and Chris Rovery crossed for Clifton.

Wild Geese extended their advantage with a third try of the afternoon, but Clifton responded as Pomphrey grabbed his second.

The home side stretched their lead with bonus point score on 55 minutes, however, the visitors went in front when Rovery finished off a well-worked move.

At 27-26, the game was still in the balance, but Brad Barnes made sure the five points were heading back to Bristol as he landed a penalty for Clifton in the final 10 minutes.

Old Albanian and Worthing Raiders’ search for a welcome victory continues as they played out a thrilling draw at Woollams.

The Raiders were on top in the first half, establishing a 24-0 lead as Harry Barlow scored a hat-trick while Kiba Richards also touched down.

OAs, who before the game announced they would be parting ways with Gavin Hogg and appointing James Buckland as their new head coach, did fightback as Charlie Hughes and Tobias Munday (2) crossed.

The hosts levelled the scores in the second period as Morgan Thompson dotted down and their resurgence continued when Tim Bond and Dan Watt scored to put OAs 34-27 up with seven minutes to go.

Matt McLean had slotted a penalty earlier on and was on hand to convert Jack Forrest’s late and dramatic try as Worthing snatched a share of the spoils in Hertfordshire.

Barnes claimed only their second win since November as they beat Dings Crusaders at Barn Elms.

George Head crossed the line for the hosts after just two minutes, but Thomas Anderson dotted down to reduced Barnes’ lead to 7-5 at half-time.

Robbie Martey went over to increase Barnes’ advantage, however, Josh Trinham’s score put Dings in front for the first time in this contest.

But, Josh Hammett kicked two late penalties to ensure a much needed win for Barnes, who are now 13 points clear of the relegation places in National Two South.