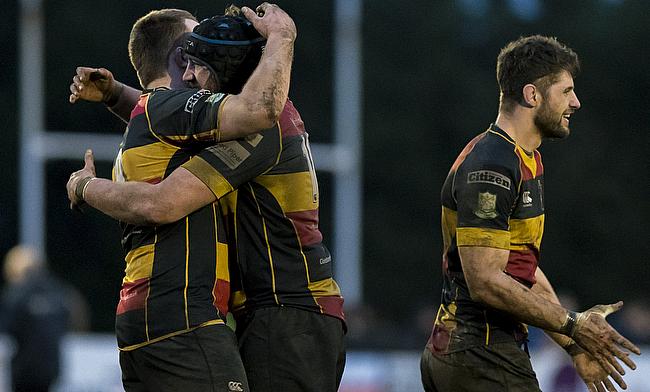 Cinderford extended their lead to nine points at the top of National Two South after clinching a bonus-point win over promotion rivals Chinnor at Kingsey Road.

The Foresters have now won their last 14 matches and with 10 games left in the season, Paul Morris’ side are slowly edging themselves into the driving seat for the league title and automatic promotion to National One.

Below the top two, Taunton Titans moved back up to third place in the table following an away win at Worthing Raiders while Redingensians and Tonbridge Juddians couldn’t be separated, Henley Hawks edged past Old Redcliffians and Bury St Edmunds dispatched Redruth.

Cinderford extended their lead at the top of National Two South to nine points following an impressive victory over title rivals Chinnor at Kingsey Road.

Reuben Norville gave Cinderford an early lead, scoring from a turnover ball, but it was quickly cancelled out by Kieran Goss’ well-worked try.

But, Cinderford held a five-point half-time lead as a beautifully weighted pass from Liam Hemming found Terence Barbarinsa who touched down.

Chinnor produced brief snapshots of what they are capable of, but only had Phil Chesters’ try to show for their second-half efforts as Cinderford took control.

Scores from Matt Lane and George Porter sealed the win for Paul Morris’ side who are now in the driving seat for the National Two South title with 10 games left to play.

Taunton Titans defeated Worthing Raiders at Roundstone Lane to move up to third in the league standings.

The win took the Titans back into the top three, but they remain 14-points behind second placed Chinnor despite their loss to league leaders Cinderford.

Worthing did lead this contest 14-6 at half-time, helped by tries from Matt McLean and Sam Boyland.

But Ollie Rice and Paul Davis (2) both crossed to turn this game around in the second half and even though Jack Forrest went over for a try, Tony Yapp’s side held on for the victory.

Tonbridge Juddians maintained their unbeaten recent run as they earned a draw against Redingensians at Old Bath Road.

An early Jak Rossiter try gave Redingensians a 5-0 advantage, but they were pegged back on 31 minutes as Rory McHugh’s score put TJs ahead in very wet conditions.

However, Tom Vooght’s try gave the hosts a 12-7 half-time lead before Sammy Atiola’s score on the resumption.

The resulting conversion was missed and despite TJs looking the more likely to steal the win, both sides settled for a share of the spoils.

A penalty try two minutes from time gave Henley Hawks victory over Old Redcliffians, who lost ground in the race for survival.

Tries from Kayan Wiltshire and Henry Bird as well as 10 points via the boot of Ashley Groves helped Old Reds into a 20-10 half-time advantage.

The most popular try of the season so far…by a mile! Tom Haynes epitomises everything which is great about Henley Rugby Club! #notallheroeswearcapes #warrior #greathuman #humble #braveman pic.twitter.com/giGPaeLLoQ

However, Alan Awcock’s try added to first half scores by Jake Albon and Tommy Haynes which left the Hawks trailing by five points.

Old Redcliffians were then penalised for trying to bring down a driving maul and conceded a penalty try which sealed the win for Henley.

Chris Snelling grabbed a first half brace for Bury and he was joined by Jake Ashby as the hosts opened up a 21-7 lead.

Kyle Marriott’s try was added to by Chris Fuca in the second period as the Reds cut the gap to seven points.

However, a Fraser Honey penalty pulled Bury clear and a second kick from the replacement sealed the win for Ollie Smith’s side.

Wimbledon suffered a setback in their battle for survival as Canterbury registered their second home win on the bounce.

Jake Rigby’s 12th minute try and a score from Harry Sayers gave the City Men a 12-point lead at the interval.

They backed their advantage up with some resolute defending after half-time as Wimbledon looked to break Canterbury down.

The Dons were awarded a penalty try late on, but their willingness to try and snatch a result cost them as Smart capitalised on a loose pass to grab his second and clinch the win for Canterbury.

Clifton picked up a welcome victory against Barnstaple to move eight points clear of the relegation zone in National Two South.

Stung by a strong start from the hosts, Barnstaple trailed 12-0 at the break after shipping tries from James Newey and Callum Roberts.

Jarrad Hayler’s effort on 66 minutes brought Barnstaple to within five points of their hosts’, but English’s try for Clifton opened up some breathing space once again.

The visitors continued to fight and were rewarded for their endeavour when Will Topps crossed late on to secure a bonus-point, but Clifton managed to see out the remaining minutes to seal a much needed win.

Street put themselves in complete control of this encounter as they led 22-0 at the break before adding two more scores in the second period to clinch a morale boosting bonus-point win.

Paul Hurst’s men have won two of their last four games to give them hope of pulling off a remarkable escape from relegation while London Irish Wild Geese are now eight points clear of the drop zone after slipping to their third straight defeat.