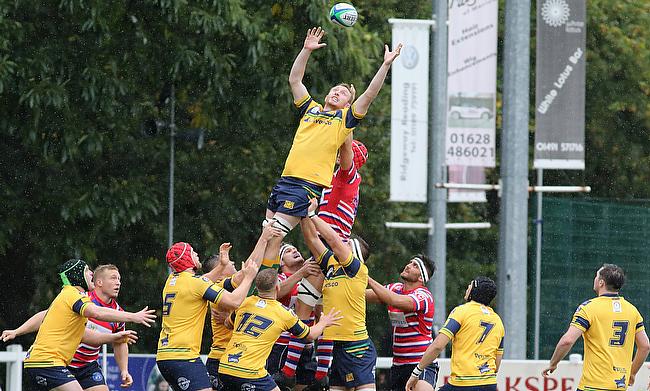 Two of last year’s promotion candidates are showing their credentials already in National Two South as both Henley Hawks and Tonbridge Juddians shone on the second weekend of the season. (Photo Credit: Steve Karpa)

The Hawks have scored 96 points in their opening two games as they hammered Old Redcliffians 50-0 in Round Two whilst TJs thumped Sutton & Epsom on Saturday.

Like Henley and Tonbridge Juddians, Taunton Titans were also in the conversation for a top two finish in 2018/19 and Tony Yapp’s side may well be in the mix again after a solid victory over Redruth secured back to back wins for the Somerset club.

Elsewhere, Clifton tasted derby day delight against Dings Crusaders and Worthing Raiders made to two wins from two at Bournemouth whilst Esher, Bury St Edmunds and Leicester Lions impressed to claim their first victories of the new campaign.

Henley were in charge the moment O’Neil opened the scoring on 11 minutes as the hosts had no answer to the Hawks’ onslaught.

The hosts are newly promoted to this division, but after losing 46-5 to Henley Hawks on the opening day, this was another tough afternoon at the office for Jeff Parsons’ side.

Kyren Ghumra did grab a brace for the home side in the first half to cut TJ’s lead to 17-14, but the visitors raced away after the opening quarter.

Taunton Titans secured their second victory on the spin as they defeated Redruth in Somerset.

After Gary Kingdom’s early penalty, Isaac Dalton dotted down for the hosts but the Reds cut the deficit to five points following Matt Shepherd’s score before half-time.

Chris Francis and Freddie Fraser both went over to put some clear water between Taunton and Redruth, but Jack Simmons’ try just after the hour brought the visitors back into the game.

However, that was as good as it got for Redruth as replacement Lewis Webb touched down on 65 minutes to ultimately seal the win for Tony Yapp’s men.

Clifton earnt the early season bragging rights in Bristol as they produced a fine away performance to see off rivals Dings Crusaders.

The Lavender and Blacks have now won four of their last five derby matches in National Two South and maintained their winning start to this term.

Ian Clark had crossed for Dings in the opening 40 minutes, but his side saw the game slip away from them in the second period as Barnes slotted over two more penalties whilst Mike Uren and Harrison both scored for the visitors to round-off a solid afternoon of work.

Worthing Raiders sealed back-to-back wins to begin the National Two South season thanks to this victory over Bournemouth.

An early brace for Harry Forrest put Worthing in control before Jack Forrest and Matt McLean went over to extend the Raiders’ advantage.

Bournemouth hit back before the break as Alex Everett-Bolter touched down and despite McLean landing a penalty after the interval, the hosts cut Worthing’s lead to 13 points as Tom Napier crossed the whitewash.

However, the home side couldn’t reduce the deficit further as David McIlwaine scored Worthing’s fifth try of the afternoon to ultimately confirm the win whilst Bournemouth’s Sam Hardcastle went over for a consolation late on.

Tristan Roberts and Thomas James inspired Esher as the Surrey-based club scored eight tries to earn their first win of the season.

Esher led 28-14 at the break with Charlie Gossington, Cameron Wilkins and James (2) all crossing while Roberts added four conversions.

Roberts scored a brace for Esher following the interval, with James completing his hat-trick, while Joe Beckett and Cameron Gentles also scored for the away side.

Robbie Martey and Alex Hind did reply for Barnes, but this compelling contest went in the favour of Esher.

Bury St Edmunds bounced back from their opening day loss to Old Albanian with a convincing victory over Westcliff in Suffolk.

Dan Walsh’s early try gave the hosts the lead and Matt Bursey and Oliver Watson also crossed to give Bury a 20-3 half-time advantage.

Shaquille Meyers and Ben Leng touched down to increase the Wolfpack’s lead before Westcliff finally claimed their first try of the afternoon through Elliot Croft.

However, Bury were in a relentless mood as Vaughan Bentley, Bursey and Leng wrapped up the win for the home side while Kostas Dellas scored a consolation for Westcliff.

Leicester Lions secured their first ever win in National Two South as they brushed aside Old Albanian at TMDP Park.

Luke Veebel’s try gave the Lions a seven-minute lead before Nick Cairns and Ed Sumpter (2) put the Midlands club in complete control at the interval.

Ashley Illston got OA’s up and running after the restart, but Leicester Lions scored their final try on 62 minutes as Will Ward capped off an excellent victory for Gareth Collins and his side.