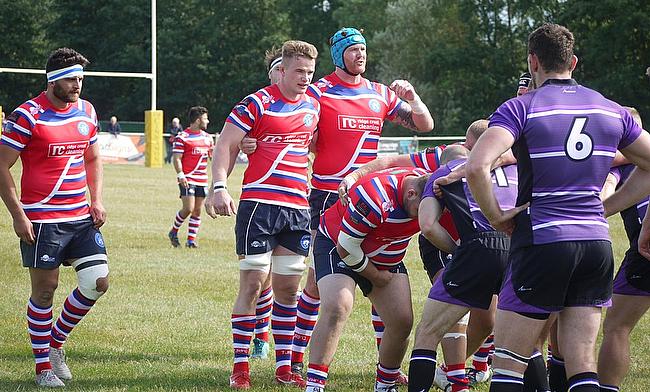 The 21-year-old rose through the ranks of the Sarries academy, but now he has returned to the club he represented as a junior.

After finishing just a single point outside the top two last season, TJs have made a blistering start to the 2019/20 campaign as they aim to go one step further this term. Since arriving at the club in the summer, Nay believes the Kent outfit are continuing to strive for success which is something he became familiar with at Saracens.

Nay said: “For me as a young lad with Saracens, I have been taught what it means to work hard and what a successful culture feels like.

“It was a great experience for me. There are loads of guys in the England team who are at the World Cup now so to see how they go about things and how much work they put in was quite amazing.

“It does take a lot of dedication, but to be a part of it and learn off those guys, is good for me not only in a rugby sense, but in life in general. It takes a lot to be successful, but once you get the taste of it, you want more don’t you?!

“At TJs, it is a very good culture there as well. We have got a good group of lads and they had a good season last year and obviously they are striving to be successful so you can see some similarities between the two. These guys are turning up and putting in the effort every time they train and I want to add to it if I can.”

Nay has already experienced quite a lot during his short rugby career. In 2017, he was part of the England U20’s side who won the Six Nations Grand Slam and they also reached the final of the U20 World Championships in Georgia.

Earlier this year, Nay had a loan spell with the Toronto Arrows – who ply their trade in Major League Rugby – before moving back to Tonbridge Juddians.

Nay’s rugby CV certainly catches the eye and included on his impressive list of achievements is a previous spell in the National Leagues.

Whilst still in the Saracens academy, the versatile forward had a stint at Old Albanian in 2016 and he admitted being part of the National League environment does help a young player develop their game.

“There is only so much training you can actually do,” Nay said. “When you train, it can be quite artificial, but when you are in a game, anything can happen and you have to be able to react to that and when you play a lot, that becomes second nature  to you.

“It is important for lads to get that first taste of men’s rugby and it is important for them to get sent out to these teams for game time. It is probably more important than potentially playing A League rugby because I feel like that is not frequent enough. You need to be constantly playing just to get that experience so when you do come up to these big games in the A League or potentially a Premiership Cup game, you are able to perform which is key.”

Looking forward to an Ultra trip to Bournemouth on Sat to watch TJs in N2S R4 action at 3pm. Missing out on the 2s v Sidcup and 3s at Oaks though. Do us proud everyone! #COUTJs pic.twitter.com/nMofPujxN7

Nay has featured in all of Tonbridge Juddians matches so far this season and the men from the Slade have begun the National Two South campaign in scintillating form after securing three consecutive bonus-point wins.

And following on from their strong top two challenge last year, Nay admits the club are aiming high once again.

“It has been a really good start,” Nay said. “We trained really hard during pre-season so it is nice to see it all coming together during the games as well. Hopefully, we can keep that momentum going throughout the season.

“Since the beginning of this season, the chat has been our end goal is to hopefully gain the promotion. Obviously, we are taking it one game at a time and we are not taking any opponents lightly.”

On Saturday, TJs take on newly promoted Bournemouth having swept aside Leicester Lions, Sutton & Epsom and Old Redcliffians in their opening three matches.

TJs are currently level on points with table toppers Henley Hawks and third placed Taunton Titans, and the aforementioned duo face one another this weekend.

However, despite their early season rivals going head-to-head in Round Four, Nay insists it is important for Tonbridge Juddians to continue focusing on themselves.

He added: “We just need to make sure we turn up and keep doing what we’ve been doing. You may think that we’d probably win this game [against Bournemouth], but I think we need to go in with the mindset that it will be a tough challenge and it always will be in every game this season.

“All focus is on us this weekend. We have to take one game at a time. It is important for us to get those bonus-points so every week, we want to really push ourselves to really go out and play some rugby.

“We have a good attack and we really want to try and use it to get those bonus-points, but we have to focus on ourselves. When we come to play those guys, we will turn our attention to them, but we will focus on that when it comes to it.”