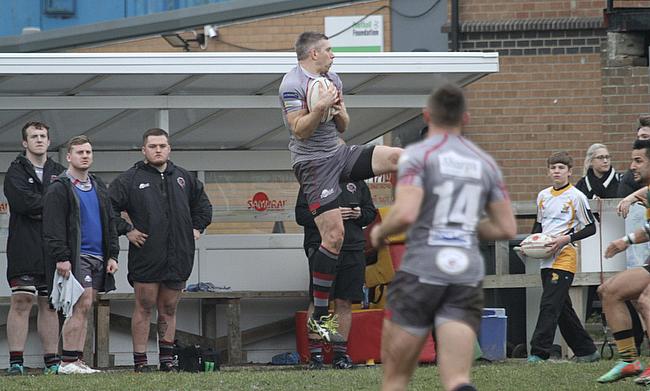 The experienced fly-half was on the money all afternoon in Somerset as he guided Tony Yapp’s side to a victory, which keeps them two points clear of Tonbridge Juddians.

TJs ground out a win over Esher to stay firmly in the promotion mix and Henley Hawks are now just one point behind the top two after an excellent triumph over Barnes.

Clifton have moved into the top four following an impressive victory on the road against Old Albanian and fifth-placed Leicester Lions left it very late to see off Bournemouth.

Down at the bottom, Westcliff secured an outstanding win against Redruth to reignite their campaign whilst Old Redcliffians and Sutton & Epsom played out a draw in Bristol.

Taunton Titans remain at the summit of National Two South thanks to a masterclass from Gary Kingdom against Bury St Edmunds.

The fly-half scored all 22 of Taunton’s points at the Towergate Stadium as he guided the Somerset club to their 10th win of the campaign.

"The main thing for us is the win. It wasn't pretty, it was a little bit ugly, but we've come unstuck before at this time of year, so we'll take that at the moment."@tauntonrfc reaction to yesterday's result:https://t.co/3xYUI8c4i0

Kingdom’s opening three penalties were enough to give the Titans a 9-3 lead after Bury’s Kodie Drury-Hawkins had kicked the visitors in front.

Mike Stanway’s try kept the away side on the toes of Taunton, but Kingdom lit up the second period with two more penalties before converting his own score five minutes from time.

Bury were able to salvage a bonus-point, though, as Alfie Garside darted over but the afternoon belonged to Kingdom as Taunton stay two points clear at the top.

Tonbridge Juddians overcame another stern test of their top two credentials as they defeated Esher at the Slade.

TJs led 12-11 at half-time following tries from No.8 Ben Ashmore and winger Murray Galbraith-Lowe, whilst two Tristan Roberts penalties and a James Booth try made up Esher’s points.

The visitors were unable to respond from their half-time deficit and a try from replacement Reece Conlon on 62 minutes proved to be enough for TJs.

Henley Hawks are right on the coattails of second-placed Tonbridge Juddians following a bonus-point win over Barnes.

A first-half hat-trick from prop Charlie Hughes, plus a score from Jack Robinson, helped Henley into a 24-10 lead whilst Ciaran Smyth crossed for Barnes.

Ben Bolster’s penalty stretched the Hawks’ lead on 55 minutes and a further try from Sam Lunnon made the game safe for the hosts.

Barnes did spark into life in the final five minutes as Basil Strang and Jamie Collins both crossed but they couldn’t find another score to secure an extra point at Dry Leas.

Clifton scored six tries in an emphatic victory over Old Albanian which saw Matt Salter’s side move up to fourth position in the league standings.

Henry Harper scored twice, whilst Alex Lambert, Niall Gibbons and Bentley Halpin also crossed on another impressive afternoon for the Lavender and Blacks.

The visitors were also awarded a penalty try whilst the hosts’ only points came in the same manner, but they couldn’t handle Clifton in the second period.

Leicester Lions stretched their winning streak to three matches as a last-gasp penalty from Ben Young gave them a dramatic win against Bournemouth.

Three penalties from the boot of Grant Hancox and a try by Fred Gleadowe saw the hosts lead with six minutes remaining.

The Lions, who had led 8-3 at the break following Kaz Henderson’s effort, had to dig deep and Young’s fourth penalty of the afternoon snatched the victory at the death for the Midlands club.

Westcliff ended a run of three straight losses by producing their result of the season so far as they defeated Redruth.

Peter Mahoney and Jacob Ford’s side were ahead at half-time thanks to tries from Greg Bannister, Joe Vandermolen and Will Morrant, while Jack Simmons crossed for the Reds.

However, Westcliff were able to negotiate the last three minutes and the victory leaves them just one point adrift of safety.

Both of Forrest’s scores came inside the opening 10 minutes as Worthing carried a 22-5 lead into half-time.

Matt McLean and Elliot Luke both touched down for the Raiders, but it was first blood to Dings after the break as Ian Clark added to Tom Hargan’s earlier try.

However, Worthing were able to take the game away from the Crusaders in the final 10 minutes as a penalty from Henry Anscombe and a try by Curtis Barnes secured another victory for the hosts.

An early penalty from Ashley Groves was matched by S&E’s Michael Cooke in a cagey first-half in Bristol where strong defences shone through.

Scott Parsons’ try just after the hour gave Old Reds a 10-3 advantage, but the visitors were determined to salvage something from this contest and did so in the final 10 minutes as Phillip pounced on a loose ball to touch down.

The result leaves Old Reds two points clear of the relegation places whilst Sutton and Epsom are three points from safety heading into the final weekend of November.