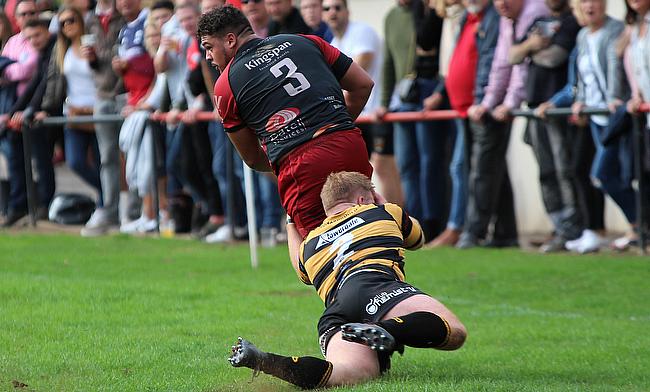 London Irish Wild Geese and Old Redcliffians will bid for their maiden victories when they face one another in Round Four in National Two South.

Both clubs have lost their opening three matches and after being embroiled in a relegation battle last term, Wild Geese and Old Reds will be itching to get off the mark this Saturday.

At the right end of the table, Rams RFC have made a sensational start to the campaign and they are now the only unbeaten side in the division. However, their perfect record will be put under scrutiny this weekend when they face an Old Albanian outfit who were relegated from National One in April.

Last week, Rams RFC Head Coach Seb Reynolds told us his side were just focused on improving rather than looking at the early league standings. However, the Rams boss may have had a quick glance at the table on Saturday evening and would’ve seen his club still top of the pile after an excellent victory over local rivals Henley Hawks in Round Three.

Here’s your #Nat2S table as we near Round 4, with @Rams_RFC remaining the only unbeaten side at the top of the league ???? pic.twitter.com/RLjkJYUY2T

The Berkshire outfit maintained their 100 per cent start and they are now the only unbeaten side in the league, but this Saturday, they face a tough assignment away at Old Albanian. OAs were relegated from National One in April and may well have thoughts of an immediate promotion back to the third tier. Gavin Hogg’s side have made a decent start to achieving that possible goal with two victories from their first three fixtures. A win last time out against Barnes was the perfect response after losing to Bury St Edmunds in Round Two and now OAs will be aiming for their first home victory of the campaign against the unbeaten league leaders.

Last Friday, Taunton Titans kicked off the rugby weekend with a well-deserved victory over Clifton. Tony Yapp’s side moved up to second in the table following the win and they remained in that position after Saturday’s results. It was exactly what the doctor order for Taunton after a narrow defeat against Redruth in Round Two so they will be searching for their first away win this weekend when they head north to face Birmingham and Solihull.

A whopping 492 points were scored in National Two South last week, but Birmingham and Solihull were involved in the lowest scoring fixture. The Bees were edged out 15-10 away at Dings Crusaders as Pete Glackin’s men failed to build on their maiden victory in this division. Last time the Midlands club were at Portway, they defeated Old Redcliffians so the newly promoted club will be hoping to double their tally at home this weekend.

Following their opening day defeat to Henley Hawks, Bury St Edmunds have responded in the best possible way. A superb victory away at potential promotion contenders Old Albanian was followed up by a thumping 70-26 win over newcomers Guernsey in Round Three so they will be oozing confidence when they host Barnes this weekend.

Three years ago, Bury and Barnes were promoted into National Two South and whilst the former has maintained their status at this level, Barnes have worked their way back into the fourth tier after relegation in 2017. Joe Gray’s side got the season off to a flyer with a victory over London Irish Wild Geese, but since then, they have suffered narrow back to back losses against Henley Hawks and Old Albanian. This will be another test for Barnes in Round Four and they did lose 35-26 in the last meeting between the teams back in March 2016 so the London-based side will be aiming to avoid a repeat of that result.

Worthing Raiders head coach Jody Levett quite rightly showered his side with praise last Saturday after a thumping win over Redruth. The Raiders ran in 10 tries on their way to securing back to back victories and spirits will be high when they go to Clifton this Saturday.

The Raiders won this corresponding fixture last season, but the home side will be desperate to be on the right end of the result this time out. After an excellent derby day win over Old Redcliffians on the opening day, Clifton have slipped to back to back defeats so Matt Salter and his side will want to return to winning ways as quickly as possible. It has also been a big week for the Gloucestershire club having featured on BT Sport’s Rugby Tonight and they will be looking to end a positive few days with a victory in Round Four.

Last season, Canterbury picked up just four wins on the road so they would have been delighted to secure their first away victory of the term just three games into the new campaign. The City Men produced a controlled performance to brush aside Old Redcliffians and seal successive victories which leaves them sixth in the table at this early stage of the campaign.

Andy Pratt’s side host newly promoted Dings Crusaders in Round Four and the visitors will arrive at The Marine Travel Ground in a buoyant mood. A narrow defeat to Redruth on day one hasn’t affected Luke Arscott’s side as they have bounced back with two really positive wins against Clifton and Birmingham and Solihull to begin life back in National Two South on the front foot. Dings picked up just three victories the last time they were in this division and they can match that after just four matches with a win in Kent on Saturday.

Henley Hawks saw their winning start to the new season come to a shuddering halt last weekend away at Rams RFC. Nigel Dudding’s side were second best against the early table toppers, but the Hawks may look at the bigger picture after a solid start to the campaign.

Two wins from three matches is still a positive beginning for Henley and they can carry those plus points into their home fixture with Tonbridge Juddians this Saturday. Like Henley, TJs have also won two of their opening three games and bounced back from a derby day defeat against Canterbury to thrash London Irish Wild Geese last week. Peter Dankett’s side will now have their sights set on a first away victory of the season as they look to build on a decent start to the term.

The two most southern clubs in this division meet this weekend as Redruth travel to Guernsey. The Reds go to the Channel Islands off the back of a humbling defeat away to Worthing Raiders in Round Three; which ended their unbeaten start to the term. Pale Nonu’s side collapsed dramatically in second half at Roundstone Lane so they will be hoping for a much-improved performance on their travels.

While Redruth shipped 68 points last Saturday, Guernsey conceded 70 away to Bury St Edmunds. Jordan Reynolds’ side have found life tough in their maiden campaign in National Two South and they will be keen to put Round Three’s thumping defeat behind them. The best way for the Raiders to do that would be to clinch their first ever win at this level on Saturday as they look to kickstart their season.

In 2017/18, London Irish Wild Geese and Old Redcliffians were battling against relegation and both were able to avoid the trapdoor in the final month of last season. However, it looks as though the clubs will be gunning for safety once again this term after disappointing starts to the campaign. In terms of the Wild Geese, they have lost to Barnes, Rams RFC and Tonbridge Juddians so they will be desperate to claim their first victory of the season at Hazelwood this Saturday.

The same can be said for Old Redcliffians. The men from Scotland Lane have faced Clifton, Birmingham & Solihull and Canterbury, but have failed to get off the mark for this season. The Bristol outfit now have an opportunity against one of their rivals to secure a much-needed win and after beating the Wild Geese in their last meeting, they will be hoping for a similar result in Round Four.