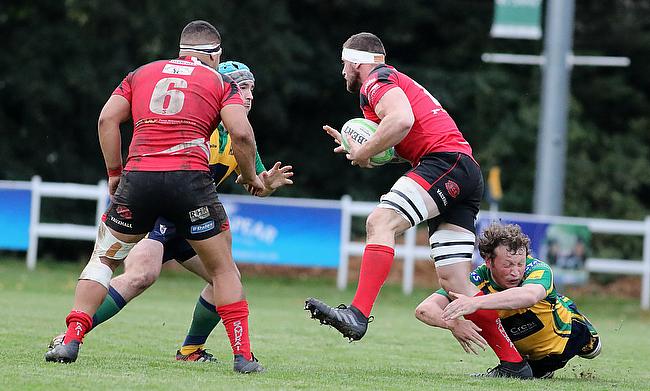 Redruth continued their excellent form by clinching a victory over Canterbury to move into the top two of National Two South.

Pale Nonu’s side have now won four games on the bounce following this win at the Recreation Ground and they sit four points off league leaders Rams RFC who dismantled Guernsey in Round Seven.

As well as their triumph over Canterbury, the Reds are also in the promotion places because Taunton Titans lost to Henley Hawks which saw the Somerset club move down to third position.

Elsewhere in National Two South, Barnes secured just their second victory of the season as they defeated an in-form Tonbridge Juddians while Clifton picked up a much-needed win as they saw off the challenge of Birmingham and Solihull.

Rams RFC made it six wins from their first seven matches in National Two South following a commanding victory against Guernsey.

Winger Andrew Denham and full-back Joe Duffelen went over early on with Jamie Guttridge following suit for the hosts at Old Bath Road.

Miles Lloyd added Rams RFC’s fourth try while Jak Rossiter and Guttridge went over before the break to make it 36-0.

Denham and James Page crossed in the second half for the Rams, with Matthew Creber and Malcolm Barnes scoring for Guernsey on a tough afternoon at the home of the league leaders.

Redruth came from 10 points down to defeat Canterbury and move up to second in the National Two South standings.

The Reds climb to second in the National 2 South with 6?wins from 7?games.

Thomas Best and Aiden Moss both crossed in the first period for Canterbury before Jack Simmons scored Redruth’s first try after 61 minutes.

The hosts added a second converted score eight minutes later as replacement Jack Hodge dotted down to seal a fourth win on the trot for Pale Nonu’s side.

Xaiver Andre’s try gave the Hawks the perfect start, but a Gary Kingdom penalty followed by Toby East’s score put the home side ahead at the interval.

But Henley rallied to move 14-8 ahead as Marcus Lowe went over for a converted try on 57 minutes.

Ratu Vakalutukali then crossed for Taunton, but after failing to add the extras, the Titans trailed by a single point heading into the final 10 minutes.

However, the hosts couldn’t add to their tally and instead, Roddy Giles landed a late penalty to settle the Henley nerves and secure and excellent win for Nigel Dudding’s men.

Scrum-half Josh Davies kicked a late penalty as Barnes narrowly beat Tonbridge Juddians to secure their first win since the opening day of the season.

Barnes shaded the first half as Davies crossed for the only try which added to Charles Wicks’ earlier penalty.

Both teams exchanged scores after the break as Murray Galbraith-Lowe’s try was cancelled out by Barnes’ Ciaran Smyth to make it 13-13.

Galbraith-Lowe grabbed his second converted try on the hour and this time Barnes’ response couldn’t level the contest.

Jack Garrett’s try five minutes from time went unconverted, but there was to be one final twist at the Slade as Davies held his nerve from the tee to snatch a much-needed win for the newly promoted side.

Worthing Raiders once again showed their strength at home as they thrashed London Irish Wild Geese at Roundstone Lane.

Jack Forrest and a second from McLean sealed Worthing’s victory while Brandon Baker and Caolan Englefield crossed for the Wild Geese who are still searching for their first win of the campaign.

Dings Crusaders secured their fourth win of the season as a late try from Jake Holcombe gave them a dramatic win against the 14-men of Old Albanian.

Ben Bolster opened the scoring from the tee for Dings before the game’s first key moment occurred on 23 minutes as Alex Brown was sent-off for the visitors.

The hosts were able to increase their lead just before half-time as Holcombe scored his first try of the afternoon, but rather than staying in control of the contest, OAs hit back to stun the Crusaders.

Peter Warne, Charles Watson and Chris West all crossed in the space of 12 second half minutes to but the away side 17-8 up.

However, Dings reacted in the final stages. Thomas Knight touched down to get the Crusaders back into the contest and with OAs leading by four points, Holcombe’s second score on 77 minutes was decisive.

Mark Kohler charge over the line in the dying stages, with his effort converted by the impressive Cameron Ritchie.

Nicholas Perez, Michael Graham and Finlay Sharp scored first half tries for the visitors at Scotland Lane, but they were 28-21 down at the break.

Scores from Kieran Hill, Kieran Ward and Ethan Doyle as well as a penalty try saw Old Reds carry a seven-point lead into the second period, but the game was all square after Graham scored again for Bury on 50 minutes.

Hill’s penalty two minutes from time looked to have clinched the win for Old Reds, but there was to be one last helping of drama as Kohler touched down to snatch the victory.

Clifton picked up an excellent victory in Round Seven as they beat Birmingham and Solihull despite having a player sent off after just 15 minutes.

Tries from Bentley Halpin and Alfie Tooala helped Clifton get off to the perfect start at Station Road, but Callum Simpson was red-carded for the hosts and Birmingham & Solihull sniffed an opportunity to get back into the contest.

However, despite having the man advantage, the visitors were outclassed in the third quarter as Alex Lambert, Chris Levesley and Will Pomphrey all touched down for Clifton to put them 31-8 ahead.

Birmingham & Solihull did respond through Tilsley and Luke Smith, but with just over 10 minutes remaining, the Midlands club couldn’t add to their points total as Clifton held out for a welcome win.