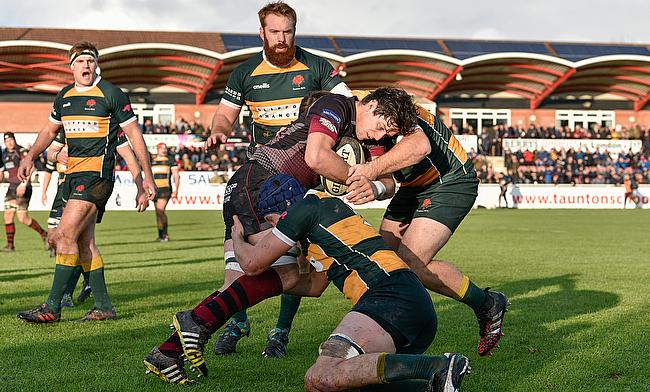 Following a loss to Esher last week, the Titans dropped down to third in the table but their excellent win over Barnes in Round 10 – combined with Henley’s hiccup against Clifton – means Tony Yapp’s side are now two points behind leaders Tonbridge Juddians, who defeated Westcliff.

Fourth-placed Esher failed to capitalise on Henley’s loss as they were beaten by a rejuvenated Worthing Raiders whilst Leicester Lions were able to return to winning ways against Sutton and Epsom.

Elsewhere, Redruth and Dings Crusaders both maintained their eye-catching recent form thanks to respective victories over Old Albanian and Bournemouth whilst Old Redcliffians’ clash with Bury St Edmunds was postponed due to the poor weather conditions.

Tonbridge Juddians remain on top of National Two South following a six-try win over Westcliff at the Slade.

TJs had three players yellow-carded throughout the contest in Kent and they were actually 5-0 down at the break following Will Morrant’s score.

FT and a 42-5 max points win for TJs. Tough first half but a powerful end for TJs keeps them top of N2S after 10 rounds. Just 20 to go # COUTJs — feeling happy

However with indiscipline issues put to bed, the home side unleashed after half-time as tries by Ryan Jackson (2), Noah Ferdinand and Finlay Coxon-Smith put TJs out of sight.

Josh Groocock and Coxon-Smith then rounded off proceedings for the league leaders in the final 13 minutes.

Oscar Kolowski scored a brace as Taunton Titans jumped back into the top two following a comfortable win over Barnes.

Barrie-John Chapman, George Gosling, Kolowski (2), Jack Arnott and Julian Salvi all went over in the first-half, whilst George Hunter dotted down for Barnes.

The hosts led 36-5 at the break, but it was first blood to Barnes following the half-time cups of tea as Ciaran Smyth crossed the whitewash.

Greg Kitson responded for Taunton on his debut and his effort was matched by Barnes’ Nick Van Buuren as the visitors searched for a bonus-point, but the final say went to the Titans as Ben Oliphant-Thompson touched down from the back of a maul.

Henley Hawks slipped out of the top two places in National Two South as Clifton produced a superb fightback at Dry Leas.

The Hawks, who were on a five-match unbeaten run, had led 17-3 early in the second half thanks to a double from Tom Emery and a score via Marcus Lowe, but the away side mounted an excellent response.

The final quarter belonged to Clifton. James Dixon’s penalty set the platform for the Bristol outfit and tries from Dan Broady and Luke Stratford sealed the win for Matt Salter’s men.

After a surprising home loss to Worthing Raiders, Clifton were able to bounce back at the first attempt whilst Henley are now four points behind second-placed Taunton following this defeat.

Worthing Raiders claimed their second win on the trot as Esher were beaten at Roundstone Lane.

John Dawe and Matt McLean crossed the line for the Raiders in the first period to give the hosts a 14-10 half-time lead, with Ben Atkins dotting down for Esher.

McLean kicked Worthing further ahead with two penalties, but Atkins’ second score made it a five-point game heading into the final 10 minutes.

However, Esher could not add to their tally as the home side held on for another impressive victory.

Leicester Lions ended their contest against Sutton & Epsom with 14-men, but they had already done enough to claim the win at Rugby Lane.

[mpu-1]The Lions took a 17-0 lead thanks to tries from Ethan Godefroy and Kaz Henderson, whilst Ben Yong kicked seven points.

The fly-half was on target from the tee once again as he gave the visitors a 20-point lead early in the second half.

It took until the final 10 minutes for Sutton & Epsom to open their account as winger Jacob Bushnell darted over and there may have been a small chance of collecting a losing bonus-point for the hosts when Leicester’s George Martin was sent-off.

However, it was too late in the day for S&E to really trouble the away side and Young’s third penalty of the afternoon wrapped up the win for the Midlands club.

Redruth ran in four tries to defeat Old Albanian at Woollams as the visitors continued their impressive form in National Two South.

The Reds have lost just one of their last seven matches as Nigel Hambly’s side have recovered from a mixed start to the campaign.

The visitors controlled proceedings from the off and scored 25 unanswered points before the hour.

Shae Tucker, Jack Hodge and Jack Oulton all crossed whilst Fraser Honey landed 10 points from the tee and despite Andrew Daish going over for OAs, Redruth had the last word as Matt Shepherd touched down a minute from time.

Dings Crusaders secured their third win on the bounce thanks to a late try from Tom Knight against Bournemouth.

A score from Alex Bilton and a penalty try gave the away side a 12-6 lead at the break, with Grant Hancox slotting over two penalties for the hosts.

Dings built on their advantage as both Jordan Grattan and Tyrese Johnson-Fisher touched down to help the Crusaders establish a 20-point lead.

However, Bournemouth staged a remarkable response as tries from Hancox and Fred Gleadowe, as well as two further penalties from the former, saw the Lions tie the game up with three minutes remaining.

But there was to be one final twist as Knight’s intelligent dummy allowed him to scoot over to break Bournemouth hearts late on.