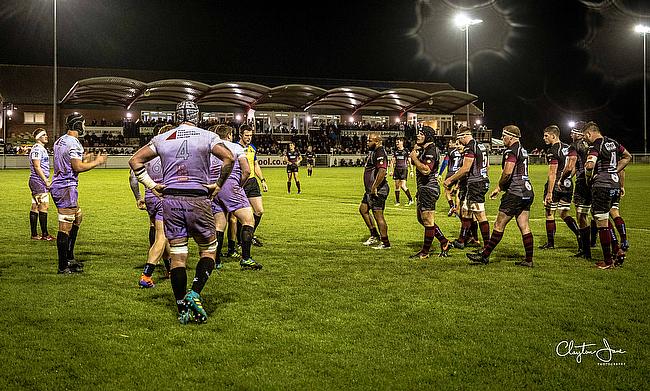 Taunton Titans produced an excellent comeback against Dings Crusaders to clinch a victory which saw them return to the top of National Two South. Photo Credit: (Clayton Jane Photography)

Tony Yapp’s side found themselves 22 points down in the first period against Dings, but fought back to secure a win which has moved them two points clear at the summit.

They have dislodged Tonbridge Juddians from pole position as Clifton, for the second week in a row, threw a spanner in promotion ambitions following a fine victory in Bristol.

Henley Hawks are now two points off the top two after coming from behind to beat Esher whilst Leicester Lions kept the frontrunners in their sights following a comfortable win over Old Redclfffians.

Elsewhere, Old Albanian edged past Westcliff whilst Worthing Raiders came out on top against Barnes following an enthralling contest.

Taunton Titans recovered from 27-5 down to move back to the top of National Two South as they defeated Dings Crusaders in a scintillating contest.

After Jack Arnott handed Taunton the lead after only four minutes, the Crusaders took complete control as Tom Anderson, Jordan Grattan and Anthony Welling crossed for the excellent hosts.

Oliver Millner converted all three scores to add to his two penalties, but Dings’ 22-point lead would slip away from them in the remaining 45 minutes of this encounter.

Taunton’s comeback began with a penalty try, as well as a second score Arnott before the break, and  the visitors then hit their straps.

Oscar Kolowski, Chris Francis, Tom Popham and Isaac Dalton all crossed in a superb second half display and Tony Yapp’s side are now two points clear at the summit.

Tonbridge Juddians have been knocked off the top of National Two South as Clifton secured their second impressive victory in as many weeks.

Tries from Chris Levesley and Mark Roberts helped Clifton to a 17-8 lead, with Jack Nay going over for the visitors.

The boot of Brad Barnes put the hosts 12 points ahead, but quick-fire tries from Hugo Watson and Ryan Jackson saw TJs turn this game around.

However, Clifton were the better side in the final quarter and the decisive blow came on 66 minutes as Barnes’ second penalty proved to be enough for the Lavender and Blacks to clinch the win.

Henley Hawks scored 34 unanswered points as they came from behind to beat Esher at Molesey Road.

Marcus Lowe and Samir Kharbouch went over early in the second period and that set the tone for the rest of the contest as the Hawks dominated the scoreboard.

Leicester Lions’ 100 per home record continued in Round 11 as they brushed aside Old Redcliffians at TMDP Park.

The visitors made the quicker start as Luke Rapson raced over after just three minutes, but a penalty from Ben Young, combined with a Nick Cairns try, put the Lions in front.

Max Johnson, Luke Veebel and Oli Tapscott all crossed in the second period for the home side, who are now up to fourth in the division.

Redruth continued their progress up the National Two South standings after braces for both Harry Davey and Todd Prisk helped them to a third straight win against Sutton & Epsom.

The home side ran in seven tries in total with Ed Pascoe, Davey (2) and Prisk all going over before the break.

Something to look at to pass the day!

Full video highlights of the try’s check out our Facebook page!

Fraser Honey converted all three tries and made no mistake in the second period after Richard Brown, Prisk and Ali Stacey went over.

Tries from flankers George Drye and Joe Ridgley were all the away side could muster up in Cornwall as Redruth lifted themselves up to fifth place.

Bury St Edmunds recored their fifth successive home win of the season as they beat Bournemouth in Suffolk.

Scores from Ben Leng, Ben Cooper and Mike Stanway, as well as a penalty try, secured the bonus-point before half-time for the Wolfpack.

Stanway grabbed his second on 37 minutes and Will Affleck also crossed in the opening 40 minutes for the hosts.

Bury’s only score of the second-half came right at the death as replacement Tom Brown dotted down, while Bournemouth’s points came via Alan Manning and Dan Stewart after the Lions had trailed 40-0 at the break.

Old Albanian secured a narrow win over Westcliff as the visitors ended a three-game losing run.

Westcliff had led 14-5 at half-time after a brace from Ewan Binneman whilst Nico Defeo scooted over for OAs.

The away side did hit back with two tries in six minutes as Harry Betts and Jamie Townsend both crossed to give OAs the lead.

Jack Jones’ penalty for Westcliff just before the hour kept the game in the balance, but OAs were able to hold on for a welcome triumph.

Worthing Raiders beat Barnes in a thriller to extend their winning run to three matches in National Two South.

Tries from Jonathan Dawe, Scott Barlow and Curtis Barnes helped the Raiders into a 22-19 half-time lead after a pulsating first 40.

Cameron Ruddock, Ryan Seabright and George Hunter also crossed for Barnes in the opening period, but a penalty from Worthing’s Matt McLean proved to be the difference.

However, Barnes struck first after oranges as Basil Strang crossed the whitewash, but Worthing matched the fly-half’s effort as Harry Forrest went over.

Another penalty from McLean nudged Worthing six points ahead on 64 minutes, but Barnes missed an opportunity to snatch this contest right at the death.

Johan Van Der Poel scored on 79 minutes, but Barnes failed to add the extras as the Raiders held on to continue their perfect November.