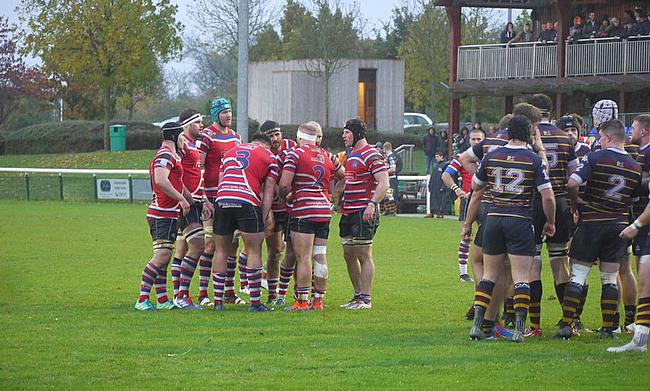 After surrendering their position at the top following a defeat to Henley Hawks two weeks ago, Peter Dankert’s side now the lead way by two points.

The aforementioned Hawks are also back into the top two following their victory over Westcliff whilst Taunton Titans have dropped down to third after falling to a 10-8 loss to Esher in challenging weather conditions.

Both Clifton and Leicester Lions were unable to take advantage of Taunton’s hiccup as they were beaten by Worthing Raiders and Redruth, respectively, in Round Nine.

Crazy here at OAs then and a massive recovery after this morning. Horrible conditions but TJs got off the hook here and OAs suffer first home defeat of the season #COUTJs

A converted try scored by James Green with five minutes remaining won the contest for TJs whilst Will Colderick also crossed in the second period.

Fly-half Joe Butler kicked all of the home points, which did give the OA’s a 9-0 half-time lead, but Tonbridge Juddians were able to grind out the victory to move two points clear at the summit.

Henley Hawks stretched their unbeaten record to five matches and they also moved back into the top two following a bonus-point win over Westcliff.

Henley led by eight points after an entertaining first half with Sam Lunnon, Ewan Fenley and Ben Bolster scoring tries.

Will Morrant’s score and a penalty from Greg Bannister brought Westcliff back into the contest and on the hour, they were very much alive in the game when Chris Marsh dotted down.

However, they were unable to complete a remarkable turnaround as Lunnon’s second try on 71 minutes secured another victory for the Hawks.

Taunton Titans have fallen to third spot in National Two South after suffering a narrow defeat to Esher in Surrey.

A Sam Druce penalty gave Esher the lead in difficult weather conditions, emphasised by the 3-0 scoreline at the break.

Esher were able to get the better of the elements in the second period as Lennox Anwanyu raced over to extend the hosts’ advantage.

Taunton then regrouped and mustered up a response as Gary Kingdom’s penalty was shortly followed by Isaac Dalton’s try.

Unfortunately for Taunton, they were unable to convert the extras which means the Titans are now out of the promotion places but only ‘Games Drawn’.

Tries by Jonathan Dawe and Elliot Luke helped the Raiders go into the interval on level terms with Clifton, whose points came via James Dixon and Chris Levesley.

Centre Jack Forrest crossed to give Worthing the lead on 48 minutes and the much-needed bonus-point win for the visitors was confirmed just after the hour as Calum Waters dotted down.

The victory for Worthing now leaves them eight points clear of the relegation places.

Redruth returned to winning ways at the first attempt as they came from behind to earn a victory over Leicester Lions.

Nick Cairns powered over to put the Lions in front, but tries from Bradley Janes and Harry Davey put the Reds 12-7 ahead at the break.

Leicester’s Luke Veebel and Redruth’s Fraser Honey were both sin-binned in the second period, but it was the home side who were able to add to their tally after the interval.

Matt Shepherd pinged over a penalty and with one-minute remaining, Redruth’s win was rubber-stamped as Richard Brown dotted down from close-range.

The Suffolk side were 12-0 up inside the first 17 minutes following tries by winger Shaquille Meyers and flanker Bursey.

Sutton & Epsom, who have slipped back into the bottom three following this loss, conceded a third try before half-time as Bursey grabbed his second score of the afternoon.

Bursey then completed his hat-trick to secure the bonus point for Bury and the openside pounced again in the final 10 minutes to round off an excellent personal and collective display.

Dings Crusaders battled to their second win on the spin as they beat rivals Old Redcliffians in the latest Bristol derby of the season.

Tries in either half from prop Liam Appleton and fly-half Ollie Millner proved decisive for the home side.

Millner kicked seven points throughout the afternoon and the Crusaders’ excellent game management in the second-half was key to their fourth victory of the campaign.

Ethan Doyle had opened the scoring for Old Reds after 15 minutes, but this was another defeat against one of their near neighbours.

Barnes reignited their National Two South season as they secured a huge victory over Bournemouth to move out of the relegation places.

Thanks guys; enjoy the bus back and good luck to you too! ???? https://t.co/6DOrgvTlQP

There was to be no stunning turnaround from Bournemouth despite just about staying in touch with the host thanks to scores from Dan Kirkpatrick and Gianluca Firetto.

Instead, Barnes were able to add the only try of the second period and fittingly it was Hind who completed his hat-trick to seal a morale-boosting win for the London-based side.