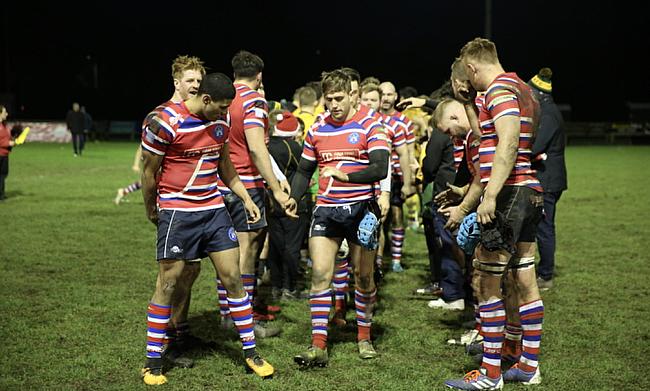 Tonbridge Juddians are still leading the way in National Two South after they came from behind to beat Bury St Edmunds. (Photo Credit: Shawn Pearce)

The Wolfpack had not lost in Suffolk all season and Bury looked as though they were going to maintain their perfect home record, but the table toppers were able to produce a result of promotion candidates.

Henley Hawks and Taunton Titans kept on the heels of the league leaders with respective wins over Leicester Lions and Old Redcliffians, but Clifton are slowly falling away from the frontrunners after a defeat at Esher.

Tonbridge Juddians came from behind to beat Bury St Edmunds as they remain on top of National Two South.

Held and intercept but ref blows for another penalty. Another scrum then.
Held again. Ball flung right. Another pen though and it’s a lineout. But they drop it and FT 13-17 win for TJs . Some turnaround by TJs. Very well played BSE

Ben Leng’s try and a penalty from Kodie Hawkins put the home side 10-0 up at the interval.

But the league leaders rallied in the second half and tries from Josh Groocock and Hugo Watson saw them through. Will Robinson also kicked seven points to keep TJs at the summit of the division.

Henley Hawks failed to secure a bonus-point, but they still sit second in the National Two South table after a narrow win over Leicester Lions.

The Hawks occupy a spot in the top two by virtue of ‘Games Drawn’ but travelling to the Midlands and securing a win would have been very satisfying for Nigel Dudding’s side.

A Ben Young penalty broke the deadlock after just three minutes before Alex Bradley and Xavier Andre both scored either side of the interval for Henley.

Devon Constant went over for the Lions on 65 minutes, but they were unable to breach the Hawks defence again as the visitors held out for the win.

Taunton Titans continue to heap pressure on their promotion rivals after an excellent victory over Old Redcliffians at Scotland Lane.

They ran in five tries to Old Reds’ one and their first half display set the platform for their triumph in Bristol.

Ben Oliphant-Thompson, Toby East, Ratu Vakalutukali and Jack Arnott all went over in the opening 40 minutes to give Taunton a 26-0 lead.

Kieran Ward powered over at the beginning of the second period for the hosts, but Taunton were able to ultimately secure the win with 13 minutes remaining when East grabbed his second 100th appearance for the club.

Clifton’s chances of challenging for a top two spot suffered another setback in Round 15 at they were stunned by a remarkable Esher fightback.

The visitors dominated the scoreboard in the first half and led 26-8 thanks to braces from Harry Bate and Kieran Griffiths.

Esher needed a big second period if they were to turn their fortunes around and Peter Winterbottom’s side produced a sensational response to score 24 unanswered points.

Redruth claimed their sixth win from their last seven matches, but they were made to battle for their latest victory against Bournemouth.

Dean Bonds scored the only try of the first period as the Reds led 10-6 with Fraser Honey kicking five points whilst Grant Hancox nudged over two penalties for the visitors.

The Bournemouth captain was accurate again from the tee to cut Redruth’s lead to just a single point, but Jake Clemson’s charge down resulted in the flanker latching on to the loose ball to dot down.

Tries from Kyren Ghumra, Mike Cooke and Oliver Kilgallon put S&E 19-15 up at the break, with Harry Forrest and Elliot Luke going over for the Raiders.

A penalty and converted try from Matt McLean, plus Sam Cook’s effort, ultimately wrapped up the win for Worthing, but the hosts were determined to pick up two bonus-points and Ellis Rudder’s try one minute from time ensured S&E weren’t left empty-handed.

However, the game was level at half-time following Tom Anderson’s effort and the Crusaders had to wait until the final 11 minutes to stretch their advantage and clinch the win.

Both Jordan Grattan and Bradley Doggett touched down but OAs did have a chance rescue a draw following Defeo’s second, however, they were unable to add the extras.

Barnes have distanced themselves further from any relegation trouble with a battling win over Westcliff, who remain two points above the drop zone.

An entertaining first half ended with Westcliff 24-19 in front thanks to tries from Seb Reynolds, Greg Bannister and Will Morrant, whilst Josh Davies (2) and Pete Weightman went over for Barnes.

And the hosts were able to clinch the victory in the last 12 minutes as Basil Strang’s penalty was swiftly followed by James Adams’ try.