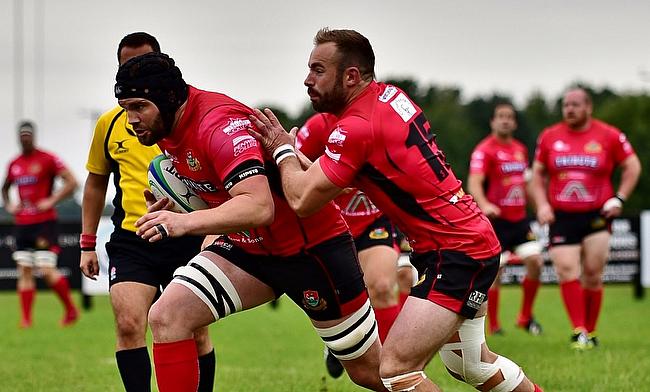 Taunton Titans, Chinnor and Cinderford will all be keen to continue their momentum in National Two South as the race for the top two spots starts to heat up.

Currently, Taunton lead the way and have a one point lead over Chinnor while Cinderford are three points adrift of the table toppers. All three sides have been in and around the promotion places so far and it looks as though the fight for the title could be between these clubs.

Watching with interest this weekend will be the in-form Redingensians. The fourth place side take on bottom of the table Wimbledon while elsewhere in the top half, Redruth host London Irish Wild Geese, Bury St Edmunds are at home to Clifton and Canterbury entertain Worthing Raiders.

Meanwhile, Henley Hawks, Barnstaple and Old Redcliffians take on the aforementioned top three and Broadstreet and Tonbridge Juddians clash in the Midlands.

Taunton Titans had to fight to secure their ninth successive win of the campaign, but Tony Yapp’s men came out on top against Clifton to stay at the summit of National Two South. The men from Hyde Park are keeping the likes of Chinnor and Cinderford at bay and they will be hoping to carry their momentum into November as they begin the month with a home fixture against Henley Hawks.

Three seasons ago, both of these sides were battling for promotion to National One, but now Henley Hawks are trying to rebuild their way back up the league pyramid. After a mixed campaign last term, which ended with Pete Davies’ side finishing in ninth, the Hawks are once again mid-table this year. Henley have won three of their last five matches which leaves them in the top-half of the division and with that recent form in mind, they may prove a stubborn opposition for the league leaders.

Chinnor can do nothing more at present. Matt Williams’ men continue to churn out victories, but nine straight triumphs leaves them still a point behind league leaders Taunton Titians. The table toppers are yet to put a foot wrong, but when they do, Chinnor will be ready to pounce and that is the mentality the men from Kingsey Road need to have if they are to go one better than last year.

The Black and Whites missed out on a top two finish on ‘Games Won’ and they are once again mounting a serious promotion push so the challenge which awaits Barnstaple this weekend is not an easy one. Steve Perry’s side had mixed fortunes in October; winning two and losing two of their four fixtures played last month. However, Barum’s victories both came at Pottington Road where they have lost just once all season. This will be the Devonshire outfit’s toughest test, but on their own patch, they will be aiming to upset the applecart.

Following their defeat to Chinnor in Round Six, Cinderford have firmly got their season back on track and are doing so with minimal fuss. Three straight wins since that loss in October leaves Paul Morris’ men just three points off top spot as they continue to fight their way back into the promotion places.

They are certainly on the right path back to National One, but in contrast, their hosts this weekend are heading down the wrong road. Old Redcliffians’ time at this level has been tough so far. Having clinched promotion in April, ORs are yet to taste victory in National Two South and they are currently 15th in the table, 11 points from safety. The Old Reds have played Chinnor and Redingensians in recent weeks and it doesn’t get much easier for them tomorrow. Coach Saul Nelson has said his players ‘understand the challenges ahead’ and this is certainly another difficult assignment for his side.

I don’t think anyone would have blamed Redingensians if they had set off fireworks a week early. Last Saturday’s victory over Barnstaple sealed a perfect month for the Rams who won all four of their fixtures in October to move up to fourth in the division. Their achievements so far this season have been excellent and the Old Bath Road faithful will be confident that they can extend their winning run to five matches when they travel to Wimbledon tomorrow.

The Berkshire club sit seven points adrift of third place which is a nice problem to have while Wimbledon are currently 14 points off safety as we begin November. The Dons’ first two months in National Two South have been difficult and their worst result of the campaign came last Saturday when they were humbled by London Irish Wild Geese. The truth is that Wimbledon haven’t played badly this term, but they must now dust themselves down and go again this weekend because the need for a victory is becoming greater as each round passes.

Redruth are back at the Recreation Ground this weekend following their first away victory of the campaign. The Reds beat Henley Hawks 44-22 and they have now won three of their last four matches as they welcome London Irish Wild Geese to Cornwall this weekend.

The fifth placed side have secured five straight home victories this season, but 11th placed London Irish Wild Geese take the 500-mile round trip to Redruth following a successful and potentially crucial October. Lee Starling’s men won two of their four fixtures against sides below them in the division and after a season battling against relegation last year, those are exactly the sort of results Irish need to avoid a similar scenario. Now, they take on Redruth and Wild Geese did actually win this corresponding fixture back in April so this certainly won’t be a straightforward afternoon for the hosts.

Bury St Edmunds looked dead and buried at half-time against Canterbury last weekend. Trailing 21-5 in Kent, Ollie Smith’s side were heading towards their fourth loss of the term, but a remarkable fightback from Bury saw them clinch a 29-21 victory. That win means the Wolfpack are up to sixth in the table and they welcome Clifton to Suffolk this Saturday aiming to continue their positive beginning to the season.

The visitors Clifton lost three of their four matches in October, but they would have taken plus points from their defeat against league leaders Taunton Titans in Round Nine. The Lavender and Blacks produced an excellent display in defeat and the task for Darren Lloyd’s men is to now produce that same kind of performance more regularly because they will start to pick up more victories. All three of Clifton’s win this term have come against sides in the bottom half of the table so can the 12th place side change that record this weekend?

If there was one side who were left kicking themselves harder than most last Saturday it was Canterbury. Andy Pratt and his team must have been massively frustrated as they left a comfortable lead slip away from them against Bury St Edumunds. Now, the City Men will look to make amends and return to winning ways when Worthing Raiders visit the Marine Travel Ground tomorrow.

The Raiders take the trip to Kent aiming to build on last weekend. Head coach Jody Levett described his side’s victory over Tonbridge Juddians as a ‘stepping stone’ because for Worthing, it was a much needed win. They arrested a run of six straight losses and the Roundstone Lane faithful would not have minded the battling nature of Worthing’s performance last Saturday. The Raiders had played six of the top seven during their losing streak and they are once again facing a team that falls into that bracket this Saturday. Levett will now be hoping Worthing can enjoy better fortunes against another side in the top half of the division.

Following a defeat to Cinderford last weekend, Broadstreet are back in the Midlands this Saturday as they host Tonbridge Juddians. Paul Hurst’s side currently occupy 14th spot in the division after just one win in nine games. Street were promoted from National Three Midlands last season and were put in the southern section of National Two, which was always going to be tough, so it isn’t a surprise that their sole triumph this term came at home against London Irish Wild Geese.

Broadstreet will need to continue being strong at Ivor Preece Fields and they may fancy their chances of doubling their tally of victories when Tonbridge Juddians head north. TJs are currently second bottom of the form table having lost their last five fixtures and they sit 11 points ahead of Street in the table. In the short term, this fixture could be seen as ‘vital’ as the bottom three try to keep pace with the rest of the pack, but if the visitors on Saturday get a victory, not only will it be a huge boost for TJs, but it would leave Broadstreet with a lot of work to do.