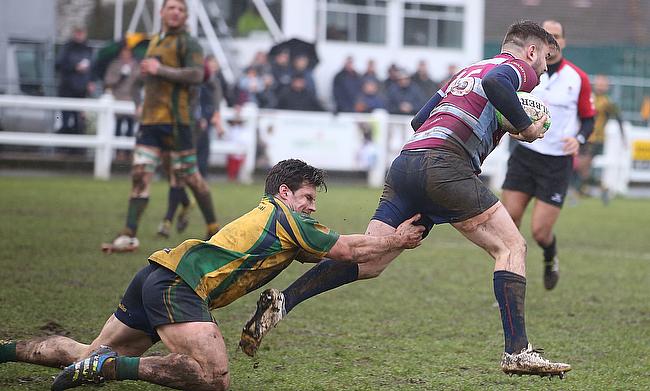 Last Saturday’s results in National Two South delivered a new chapter in this astonishing fight to avoid the drop and this weekend, two sides are waiting to pen the next instalment of this thrilling battle.

In Round 23, Wimbledon and London Irish Wild Geese meet at Barham Road with both teams eyeing safety.

Wild Geese are nine points clear of the drop zone so a win this weekend would leave them in a much stronger position whilst for the Dons, victory would enhance their chances of moving out of the bottom three.

Meanwhile, their fellow relegation rivals Old Redcliffians, Clifton and Broadstreet face tough assignments as they all take on the current top three so who will have a happy ending in the latest episode of the story for survival?

Cinderford took their points total to 105 last weekend following their comfortable victory over Tonbridge Juddians. Director of Rugby Paul Morris told Gloucestershire Live he would have “laughed” at the beginning of the season if someone had told him the Foresters would rack up a century of points, but they have achieved that feat. The men from Dockham Road have won 16 games on the spin and are firmly in control of the title race, but they cannot afford to be complacent with eight games left to play.

The next hurdle for Cinderford to overcome is their encounter with Broadstreet and the Midlands club will be hoping to build on positives from their performance against second placed Chinnor last weekend. Director of Rugby Paul Hurst felt his side should have won the contest as Morgan Dawes was denied a try very similar to Gareth Anscombe’s disallowed effort against England in the Six Nations. Hurst said Broadstreet “didn’t’ get the rub of the green” and when you’re down at the wrong end of the table, those decisions are even harder to take. As things stand, Street are bottom of the division and are 13 points from safety, but if they put in a similar performance against Cinderford as they did at Chinnor, then they may be able to upset the odds this weekend.

Since their defeat to Cinderford at the end of January, Chinnor have managed to clinch back to back victories, but they have been made to work hard for their recent triumphs. A narrow win over Tonbridge Juddians was followed by a battling performance against Broadstreet, but Matt Williams’ men have come away with the right results to still leave them in the title race. The Oxfordshire side are 10 points behind Cinderford and they will continue to put the pressure on the league leaders as we approach the final two months of the season.

Chinnor also sit 15 points clear of third placed Taunton Titans so second spot is very much in their own hands and their position the play-off spot can be strengthened by claiming a victory at Old Redcliffians this weekend. The hosts still remain in a battle for survival and despite their 21-14 defeat at Scotland Lane against Redingensians last time out; Old Reds are now four points from safety after a positive recent run. The Bristol outfit  have won three of their last six matches which has given them real belief that they can beat the drop and a fifth home victory of the campaign could see them move out of the relegation places.

It was a pleasing performance for Taunton Titans last weekend. After trailing to Canterbury, they showed great character to clinch victory in Kent. At the end of the season, Tony Yapp’s side may look back at a cluster of games which cost them a place in the top two for yet another year, but for now, the Titans are on course to finish the season strongly judging by their recent form of six wins from their last seven matches.

Chinnor also sit 15 points clear of third placed Taunton Titans so second spot is very much in their own hands and that spot can be strengthened by claiming a victory at Old Redcliffians this weekend. The hosts still remain in a battle for survival and despite their 21-14 defeat at Scotland Lane against Redingensians last time out; Old Reds are now four points from safety after a positive recent run. The Bristol outfit  have won three of their last six matches which has given them real belief that they can beat the drop and a fifth home victory of the campaign could see them move out of the relegation places.

Seb Reynolds hailed Redingensians’ performance as “brilliant” as his team produced a solid display to see off a stubborn Old Redcliffians side last weekend. The Rams secured back to back wins to stay level on points with third placed Taunton Titans which continued their phenomenal season in National Two South.

The Berkshire club have progressed into a well-established side since their promotion in 2015 and a team which will be hoping to compete alongside the Rams next season are their visitors for this weekend, Barnstaple. Last time out, it was another disappointing result on the road for Barum as they suffered a defeat at the hands of London Irish Wild Geese. It was an opportunity for Steve Perry’s side to distance themselves from danger and even though they are 10 points clear of the drop, they are still not safe. With this fixture against Redingensians to come this weekend followed by matches against Chinnor and Cinderford, securing points is a must for Barnstaple as they look to maintain their status in National Two South.

Redruth Head Coach Pale Nonu celebrated his 40th birthday last weekend and he may well have been toasting a double celebration. His Redruth side had earlier secured an away victory over Clifton to stay fifth in the National Two South table. The Cornwall-based side are back at the Recreation Ground this weekend and they can tighten their grip on a top five finish for this season when they host sixth placed Henley Hawks.

The last two matches for Henley Hawks has seen fall seven points behind Redruth ahead of their clash this weekend. Defeats against Barnstaple and Wimbledon would have frustrated Pete Davies’ side, who are also suffering from their fair share of injuries. In truth, the Hawks have progressed well in their second term at this level following relegation from National One in 2016 and they will be aiming to bounce back from their mini-blip in form by becoming only the second side to win at Redruth this season.

Last weekend, Bury St Edmunds made a flying start to their encounter with Worthing Raiders, but ultimately, they slipped to a second away defeat on the trot. However, head coach Ollie Smith was quick to look at the positives and told the club’s website that he feels that the performances of his side are improving. Bury have won two of their last five matches, but they return to Suffolk this weekend aiming to continue their excellent home form.

The Wolfpack have won five of their last six matches at Harberden and they welcome a Canterbury side which also comes into this fixture on the back of two losses. Tough games against Redruth and Taunton Titans yielded one point for Andy Pratt’s side who are desperate for some positive inconsistency as they look to end the season strongly. The City Men have won four times on the road this season and a fifth triumph could see them go above seventh placed Bury this weekend.

It is eighth against ninth in National Two South this Saturday as Tonbridge Juddians host Worthing Raiders at the Slade. Coming into this fixture, the visitors sit a point and a place ahead of their hosts and head coach Jody Levett was pleased by his team’s response against Bury St Edmunds after falling behind so early. Added to that, Levett expressed how important the victory was after fixtures against the top five in the division and now the Raiders have their sights firmly set on finishing in the top half.

And that is the vision Tonbridge Juddians may be aiming for as well. TJs have been one of the stories of the season so far following their promotion from National Three and they have not looked out of place at this level throughout the campaign. Back to back fixtures against Cinderford and Chinnor just halted their momentum, but they have a great chance to get back to winning ways this weekend as they look to break into the top eight.

London Irish Wild Geese captain Scott Moore told us this week that his side are not focusing on what’s behind them ahead of this huge clash with Wimbledon. Wild Geese picked up a crucial win over Barnstaple last weekend to move them nine points clear of the bottom three and with the majority of their final eight fixtures coming against teams in the top half of the table, it is imperative Lee Starling’s side gain a positive result at Barham Road this Saturday.

However, a resurgent Wimbledon will have other ideas as they are threatening to pull off a remarkable escape from relegation. The Dons won just one of their opening 16 matches as they headed into the Christmas break, but four wins from their last six matches means they are now just nine points off safety. There is still a lot of work to do for The Dons, but victory over London Irish Wild Geese this weekend would take them a step closer to survival.