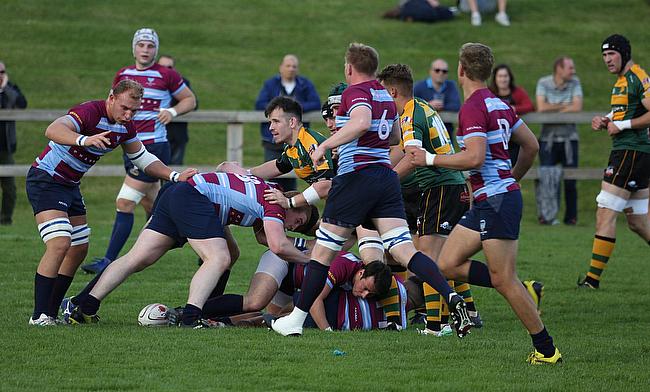 The Dons ran in six tries to secure their fifth win from their last seven matches, which now leaves them five points from safety.

The men from Barham Road will also have been pleased to see their other relegation rivals all fall to defeats as Clifton and Old Redcliffians suffered narrow losses while Broadstreet were beaten by league leaders Cinderford.

Elsewhere, Redingensians fought off the challenge of Barnstaple and Redruth came out on top against Henley Hawks while there were home victories for Bury St Edmunds and Worthing Raiders.

Cinderford produced a clinical display to stay in control of the title race in National Two South after a bonus-point win over Broadstreet.

The hosts scored two tries in the first half, centre Terence Babarinsa grabbing the first before Harry Hone added the second.

Cliffie Hodgson had landed a penalty in a positive first 40 for Broadstreet, but the relegation threatened side couldn’t build on their display after the break.

Tom Bozzard and Liam Hemming crossed for Cinderford in the second period and a penalty try wrapped up a 17th straight victory for the league leaders.

The hosts, who are fighting for survival in National Two South, nudged themselves back into the contest when Thomas Hargan found a gap in the Chinnor defence.

But, Chinnor responded with a Henry Lamont try to ultimately seal the victory whilst an Ethan Doyle try secured a losing bonus-point for Old Reds, which could prove vital in their bid to stay in this division.

Tries from Nick Mason (2) and Arun Struminski put Taunton in control, but scores via Brad Barnes, Sam Harrison and Callum Roberts made the game level at the break.

Both sides exchanged scores after the interval as Gary Kingdom’s try was wiped out by Alex Giltrow before Clifton went in front through a Barnes penalty.

However, Persey’s try restored Taunton’s lead and they were able to hold on for the win against a spirited Clifton outfit.

Redingensians have extended their unbeaten run to four matches as they fought back to beat Barnstaple in Devon.

Tries from Luke Berry and Jordan Petherbridge helped Barnstaple into a 17-7 lead.

Steve Bryant had scored the Rams’ first try and the visitors were able to dot down on three occasions without reply as a penalty try was quickly followed by scores from Connor Stapley and Jordan Souter.

Will Topps levelled the game up at 24-24 with Barum’s third try of the afternoon, but the Rams went back in front through Colin Thompson and James Foxley which ultimately sealed victory.

Barnstaple were able to claim two bonus-point as Petherbridge scored his second try of the afternoon, but the Rams had already done enough for the win.

Redruth made it three wins on the spin after outscoring Henley Hawks in an entertaining clash at the Recreation Ground.

Both sides played their part in an enthralling contest, but it was Redruth’s Alex Ducker that stole the show with a hat-trick.

The winger scored two of his three tries in the first period while Richard Brown also grabbed a brace as the Reds led 28-21 at the break.

Have to say congratulations to @HenleyHawks for their part in a hugely entertaining game today @RedruthRugby some superb rugby from both sides in a 13 try thriller.

Jack Robinson crossed twice in the opening 40 for Henley and George Primett added a second try to his tally after the restart to cut Redruth’s lead to two points.

Ducker completed his hat-trick before AJ Cant went over to give Redruth some breathing space again, but Henley stayed in touch through Sam Portland’s effort.

Rob Coote’s try just before the hour gave the hosts an 18-point lead to complete their scoring for the afternoon while Scott White went over late on for Henley.

Tries from Tui Uru, Will Affleck, Max Kohler (2) and Sam Bixby gave Bury a commanding 29-7 half-time lead, with Guy Hilton diving over for the away side.

Dwayne Corcoran extended Bury’s lead after the break, but Canterbury sparked into life as tries from Sam Kenny and Dan Smart cut the Wolfpack’s advantage to 15 points.

However, Bury’s forwards took control and their endeavour was rewarded as they earnt a penalty try to seal the game.

Canterbury were able to claim a try bonus-point through Aiden Moss, but this was another tough away outing for the City Men.

Tonbridge Juddians came from behind to beat Worthing Raiders at the Slade in a thrilling National Two South encounter.

Hugo Watson scored a hat-trick for the hosts who clinched their first win in four matches following a tough run of fixtures,

Worthing had led this contest 21-10 at the break, but Jody Levett’s side could not add to their scores in the second period as TJs turned the game around to move back into the top half of the league standings.

Wimbledon’s remarkable revival continued in Round 23 as they secured their fifth win from their last seven matches to move to within five points of safety.

Victory over relegation rivals London Irish Wild Geese has given the Dons a real chance of beating the drop, something that looked very unlikely at the halfway point of this season.

The hosts led 27-7 at the break and they never relinquished their advantage as they ran in six tries in total whilst the away side could only manage three converted scores.