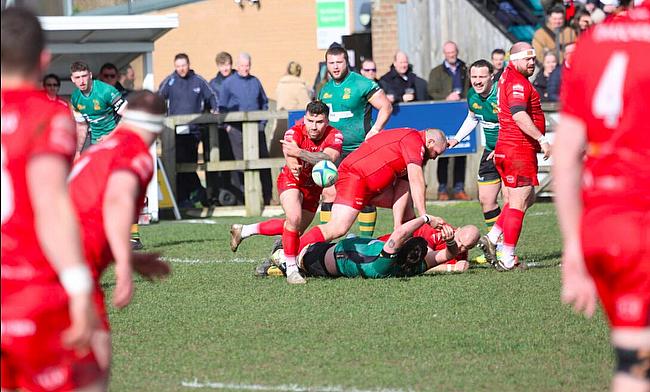 Who doesn’t love another mouth-watering clash this early in the season? After four of the top five in National One faced off last weekend, Round Seven sees league leaders Rams RFC travel to second-placed Rosslyn Park with both sides yet to put a foot wrong this term.

Six successive bonus-point wins apiece has set this fixture up perfectly, and Rams’ excellent victory over fellow title candidates Cambridge in Round Six was certainly a signal of intent from Seb Reynolds’ side. As for Park, whilst their performances haven’t been overly convincing at times, the fact they are showing desire, character and coming out on the right side of tight scorelines is crucial for their possible promotion ambitions. However, Kieran Power and his troops will know they will have to be on the money given Rams have won the last three meetings between the teams.

In his piece for The Telegraph this week, Brian Moore suggested players at level three to five were not good enough to “earn a living as a true professional.” Maybe a trip to The Rock to watch two of the best teams in tier three (who have scored 252 points each this term) may change his opinion…

Or the former England international could purchase a ticket for Cambridge’s meeting with Cinderford as third comes up against fourth on another blockbuster Saturday in National One. The hosts will be looking for an immediate response after losing to Rams last time out while Cinderford’s remarkable turnaround against Sale FC means they head to Volac Park on the back of five straight wins.

📺 The National League Rugby Review Show: Round Six@WMuggleton hosts from @RugbyHoppers as he brings you the best of the action from levels three and four…

Fifth-placed Sale FC will be wathcing on with interest when they welcome Esher to Heywood Road while Plymouth Albion host bottom-of-the-table Hull and Bishop’s Stortford travel to a Leeds Tykes side who have won their last three matches.

Elsewhere, Birmingham Moseley – who are unbeaten in two at Billesley Common – welcome Darlington Mowden Park to the Midlands and Chinnor will be looking to move out of the relegation places when they visit Taunton Titans (10th) in what looks like an important fixture for both sides at Veritas Park.

Rotherham Titans were tormented in Round Six by league leaders Fylde and it doesn’t get any easier this weekend when they face another side who are pursuing the National Two North title. Adam Byron’s charges travel to second-placed Sedgley Park who will be in a confident mood having won all six of their games so far this term which leaves them two points off the top.

The Tigers have not lost any of their last 13 matches on their own turf – a run which stretches back to November 2021 – but Rotherham will be determined to bounce back in the North West. The two defeats that the Titans (4th) have suffered this season have been against sides directly above them in the standings so they will be keen to avoid a repeat of that outcome at Park Lane.

As mentioned, Fylde currently lead the way in this division and their dazzling, five-star display against the aforementioned Rotherham means they are very much the team to beat in these early stages of the campaign. Chris Briers and Alex Loney’s side are just one of three clubs in National League Rugby to still have their 100 per cent record intact and they will be aiming to maintain their perfect start when Wharfedale visit Woodlands in Round Seven.

Third-placed Hull Ionians head across Yorkshire to face a Sheffield side who have made an excellent start to life back at level four while Tynedale host Chester and Otley entertain Preston Grasshoppers.

It is also a big weekend at the wrong end of National Two North with the bottom four sides all going head-to-head. Sheffield Tigers – who are currently hovering above the relegation zone – will be craving a victory when they take on Harrogate at Dore Moor while Huddersfield will be desperate to secure their first success of the season and begin moving off the foot of the division when they face Blaydon.

We concluded our National Two North preview by focusing on the battles at the bottom and we will carry that theme into National Two East and highlight Canterbury’s visit to Sevenoaks. The City Men will make the trip west for this all-Kent affair eager to respond after a last-gasp defeat against second-placed Dorking in Round Six. Head coach Matt Corker described the 12-10 loss as “disappointing” with Canterbury now on a run of three matches without a victory.

They sit just one place and one point above their hosts on Saturday who currently occupy the final position in the relegation zone. Adam Bowman’s newly-promoted side might find themselves in 12th place as things stand, but they have still been able to scoop up points despite not recording a win since the opening day of the season. Since that triumph over Westcliff, Sevenoaks have collected seven points from their last four matches so with that in mind, they will be keen to harness those plus points to gain a first home success in National League Rugby.

📺 And you can watch all the highlights back on The National League Rugby Review Show for FREE: https://t.co/Z4xSWZd4Pr

A bonus-point triumph could see Sevenoaks moved up to eighth in the standings given how closely contested National Two East is this term, but results would of course have to go their way. The sides they could leapfrog are Guernsey Raiders who travel to promotion-chasing Blackheath, Bury St Edmunds who visit an in-form Dorking outfit and Tonbridge Juddians who host 13th-placed North Walsham.

Back towards the summit, Old Albanian became the new leaders of the division last weekend after their excellent win over Blackheath. James Osborn’s men will be looking to build on that triumph when they take on Worthing Raiders, but that is easier said than done considering the Sussex club have won their last four matches. Elsewhere, Barnes – who sit third and two points off the top – entertain Rochford Hundred and Henley Hawks face bottom-of-the-table Westcliff.

Dings Crusaders followed up their eye-catching 19-15 win over Leicester Lions by thumping Barnstaple last time out as the Bristol outfit made it six wins from six. Stean Williams’ side have now lost just one of their last 16 games and have a three-point lead at the top of the National Two West standings heading into Round Seven.

At this moment in time, nothing should dampen the spirits of the Crusaders but their only defeat since the middle of February came against Redruth who surprise, surprise they face this weekend. Nigel Hambly’s boys were extremely close to clinching the National Two South title last term and after a patchy September, the Reds seem to have rediscovered their mojo with wins over (Newport) Salop and Luctonians this month. They welcome Dings to The Recreation Ground with a seven-point gap separating the two sides so a victory for the hosts would drag them right back into the promotion conversation but the away side will be full of belief that they can get the job done in Cornwall.

Potentially keeping tabs on that fixture will be Exeter University and Hinckley who meet at Topsham this weekend. The hosts had to fight hard to return to winning ways in Round Six as the fourth-placed side eventually got past Hornets while the visitors to Devon on Saturday come into this fixture unbeaten in their last four matches and just one place behind Exeter in the table.

Above this pair are Leicester Lions and Clifton who have home assignments against Bournville and Hornets respectively while elsewhere, Loughborough Students take on Luctonians and Old Redcliffians visit a Barnstaple side who currently prop up the division.

Stourbridge are one of the other clubs in the bottom three and they will be desperate to secure back-to-back home wins when they entertain Newport (Salop).