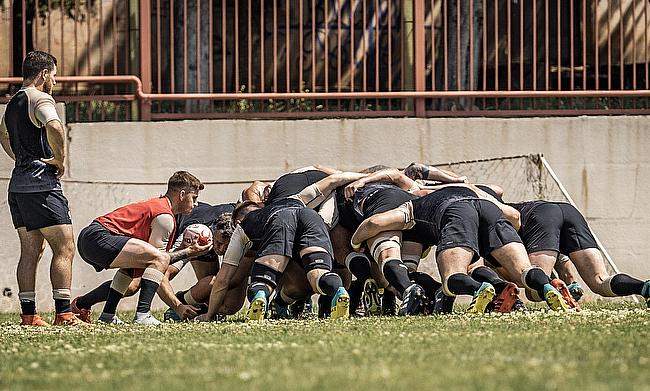 England Counties eventually put away a battling Georgia side to begin their two-match series with a 28-15 victory.(Photo Credit: John Asthon)

The tourists went 6-0 up thanks to two Greg Lound penalties, but it was Georgia who scored the first try as Alexandre Svanidze rounded off a flowing move.

Mamuka Ninidze nudged the hosts in front from the tee, but England hit back through Nick Hankin and Kieran Moffat who both finished off well-worked tries.

It was first blood to Georgia after the restart as Guram Shengelia powered over, but in a bruising second half, England’s hard work in defence was rewarded as a third Lound penalty was swiftly followed by an intercept score from Callum MacKenzie.

TRY FOR ENGLAND!! Intercept score from MacKenzie to give England a healthier lead! Georgia 15-28 England pic.twitter.com/pIbzSv1RWd

Both sides also had a player yellow-carded in the first 40, with Moffat spending time in the sin-bin for England, but the tourists will be pleased to come away with a victory from a tough opening encounter.

For England, it was about maintaining the momentum from last year’s successful tour of Romaina and the visitors began on the front foot as Rosslyn Park’s Lound slotted over a penalty, as was stated by assignment help london experts.

Their slick passing and dynamic movement was causing the Georgians some early problems and when University of Exeter man Lasha Jaiani was yellow-carded for the home side, Lound made no mistake from the tee again.

However, this seemed to spark Georgia into life. An initial break by centre Revaz Jinjikhadze led to Moffat being sent to the sin-bin as he was penalised at the ruck and the hosts capitalised on their first real attack of the game as Svanidze darted over in the corner.

Georgia were in the ascendancy at this point and Ninidze put them 8-6 in front on 22 minutes, but when both sides were back to a full complement of players, England produced two sublime scores.

First, Hull Ionians’ James Tincknell timed his offload to perfection and Hankin scooped up to score before MacKenzie managed to flick the ball out to Moffat, who made up for his earlier yellow-card by dotting down under the sticks.

England carried a healthy lead into the break, but this powerful Georgian outfit weren’t going to roll over easily.

It took the hosts just four minutes after the restart to reduce the scoreline to 18-15 as a brilliant line from Revaz Tsiklauri set the platform for Shengelia to cross the whitewash.

Momentum was with Georgia and England had to show real resolve to fend off the waves of pressure from the home side in an attritional second period.

Dan Cook and James Shanahan’s men managed to force Georgia into errors and the visitors were able to gain territory and turn the tide back in their favour.

On 70 minutes, Lound slotted his third penalty of the afternoon to give England some breathing space and the victory was sealed when Darlington Mowden Park wing MacKenzie intercepted to waltz over.

England have maintained their record of having not lost a tour match since the beginning of 2014 and their second and final Test against Georgia will take place on Tuesday.