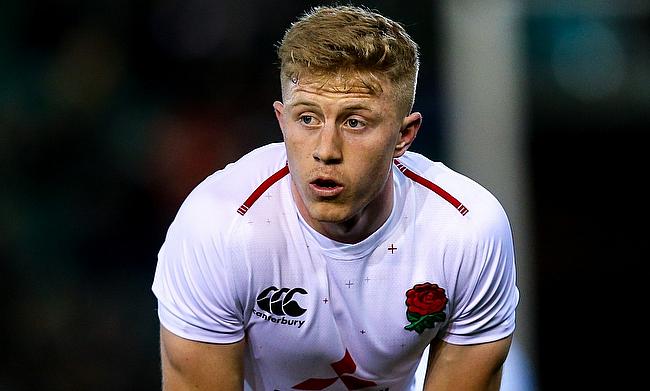 Ollie Fox admits England have their sights set on gaining revenge over Ireland when the teams meet in the World U20 Championship.(Photo Credit: England Rugby)

Three months after suffering a 35-27 defeat in the opening match of the U20 Six Nations, Fox is relishing the opportunity to take on Ireland once again when they kick off their World U20 Championship campaign.

Fox knows England will be in for another tough test against the Six Nations Grand Slam winners, but says the ‘belief’ in Steve Bates’ squad is high as they aim for a winning start in Argentina on Tuesday.

“I think it will definitely be a massive challenge,” Fox said.

England U20s’ Six Nations campaign began with defeat, losing 35-27 to Ireland in a thrilling encounter in Cork with Yorkshire Carnegie scrum half @oliver_fox1 coming off the bench for the visitors.
??https://t.co/P0qEuaUWig pic.twitter.com/FmGRE1h8LC

“Off the back of what was probably a disappointing Six Nations in terms of the end result, I think it is really exciting to have another opportunity to go and win another major tournament which is definitely a major goal for us.”

Fox alludes to a frustrating Six Nations campaign for England as they finished in third place following victories over France, Italy and Scotland.

Asked why England didn’t hit the heights many expected them to during the Six Nations, Fox added: “I think we were probably a victim of our own success in a way. We have a lot of players away playing Premiership rugby and that is credit to those boys for getting those opportunities and taking them.

“We used around 44 players in that Six Nations so the fact we do have that player depth is brilliant, but I think we probably struggled to build week on week and it took too long for us to get into our structures and our plans.”

Despite a tough Six Nations, England headed into their U20 World Championship camp on a high as they defeated South Africa 35-8 at the end of April.

England showed their cutting edge and quality in the victory in Coventry and Fox is excited to be part of a talented squad.

“South Africa are a really big rugby nation and they are going to be massive competitors in the World Cup,” Fox told ncarugby.com.

“They threw up a different challenge, being a southern hemisphere team so that was a great confidence boost going into the World Cup.

“We do have loads of experience [in the squad]. We’ve got a lot of boys with Premiership exposure and a couple who have trained with the England senior team so they all bring a wealth of experience back into camp and they lead the way. It is really good to have those boys to train alongside.”

“The excitement is palpable. You can feel it. We’re privileged to be involved with the development of these young players.” ??????????????@EnglandRugby U20s Head Coach Steve Bates on looking ahead to the World Championships in Argentina.

Fox, himself, could be part of a Premiership squad next season as the scrum-half has been linked with a move to Bath after appearing for the club in the Premiership Rugby Shield this term.

This year, he has plied his trade for Yorkshire Carnegie in the Championship, but Fox’s development has also come in the National Leagues after spells with Huddersfield and National Two North champions Hull Ionians.

“I think it is good to sort of break away from that environment where you are constantly under pressure to perform,” Fox said.

“We are still young athletes and we are still learning and discovering so it’s nice to take the pressure off a little bit. Obviously, those National League teams want to win every week, but they always appreciate the help from the academies so for us to go and explore and for it work both ways, is brilliant.”

Fox will be hoping to channel all of his experiences into England’s U20 campaign over the next month.

After opening the tournament against Ireland, Steve Bates’ side will also face Australian and Italy in Pool B over the space of eight days.

England lost in the final against France last summer and Fox made his ambitions clear as the Young Roses seek silverware in Santa Fe.