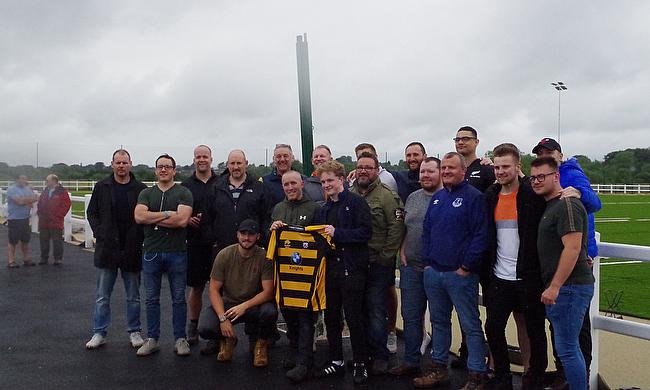 Not too many people will be aware of Stafford Rugby Club. A club that plies its trade on the seventh rung of the English League system, Stafford is one of many clubs in the country undergoing a regeneration process, a process that many see as a way to start climbing the ladder. Photo Credit: (Joe Harvey)

Maintaining their place in Midlands 2 West (North) with thanks to a late flurry of wins, next season will mark the start of a new age. Having played at the County Ground for much of the clubs history, their move to Blackberry Lane will see a brand new clubhouse and three full sized pitches, as well as one artificial one, all available for the clubs five senior sides and growing ladies section to use.

Work started at the new site in the October of 2017, with the Chairman of World Rugby, Sir Bill Beaumont, ceremonially starting work at the site. At the time Beaumont described the club ‘as one of enthusiasm and excitement’ and it is difficult to disagree.

Pic Of The Week: Stafford secure their place in Midlands 2 West (North) for the 19/20 season💛🖤 pic.twitter.com/PR88yrLuin

Three current professional players can say that they started their rugby journey at Stafford, one of which has recently returned to the club’s ranks. Samson Egerton started playing for Stafford as a six year old and left in 2008 at 16 to pursue playing at a higher level.

It would be fair to suggest that the move paid off. Attending Oxford University, the scrumhalf won four Varsity games in dark blue before playing for Yorkshire Carnegie in the Championship. It wasn’t too long after that the scrum-half’s talents were noticed by England Sevens. Following one year on the World Series, Egerton played for Premiership sides Harlequins and Newcastle.

Moving back home to Staffordshire in order to pursue a career in law, Egerton was impressed by what his old club wanted to achieve: “Once I saw the plans and the difficult season the club as having, it was an easy decision to come back to where it all began.

“When you look at the West Midlands, there aren’t actually too many big rugby clubs in the area and the standard of football in the town isn’t exactly high-end. I think there’s a real opportunity to provide Stafford with what is has always missed: a top sports team.”

With five senior sides, a mixed ability team, a growing women’s section and a large minis and youth section, Stafford’s move to Blackberry Lane will accommodate all these sides, as well as playing host to O2 Touch sessions that take place at the club two times a week.

“The club already has a lot of players down in the middle of the week and the artificial pitch will accommodate that too.” Egerton said, “Having been at Newcastle, I’ve seen first-hand how beneficial these pitches can be to the community.

“For anyone that knows what the old pitch at the County Ground was like, this will be a vast improvement. At least this one will be flat!” Egerton laughed, “It means that the club won’t have to worry about damaging the pitches in winter as much and although some people don’t like plastic pitches, it means that there will be less chance of games and training being called off.”

The most notable players to have worn the club’s gold and black hoops is Bristol’s Aly Muldowney, who moved from Stafford to play for Stourbridge in National 1 before moving to Birmingham Moseley and then on to Connacht in the Pro 12.

Another player is Nottingham’s Jake Farnworth who found favour at Leicester Tigers, playing several games for the Premiership juggernauts. Since he has moved to Nottingham where he has become a regular in the side.

“I think that the club can have more success stories like Aly and Jake. They’ve gone on to enjoy some impressive experiences, Aly won the Pro 12 with Connacht and Jake is playing some great stuff at Nottingham.” Egerton said, “Hopefully in the future, we can get to a level where this young talent may want to stay at the club and establish us in the National Leagues, or maybe even higher than that.

“The club is incredibly ambitious and this is exactly what the town needs. When you look at the other sports in the area, Stafford Rangers FC also play in the seventh division, but their facilities won’t be nearly as good as at the new rugby club.”

Retaining high quality players has been a problem for the club has had in recent times. Several players from the successful colts side have moved on to pastures new in the Midlands Premier or higher.

“We hope the new facility will encourage our homegrown talent to stay, and perhaps entice other players in the process too. We want our players to stay at the club and not go off to places like Chester or Derby. Instead our aim is to develop high quality talent that will remain with us and take us forward. That is the goal of any sports side really. Plus, having hot water will be nice.”

Hoping to become a beacon in the community, there will be various sports clubs in attendance at the new venue everyday of the week. Stafford Rangers will be bringing their youth players to the club in order to use the new facilities. Added to this various fitness classes will be on throughout the week with the aim of creating a close relationship with the people living locally to the club.

To see what the club is putting together, is simply, quite astonishing. Not only redeveloping its facilities in a different part of the town, but to be aiming to become the premiere sporting club in the region is something that could be really special.