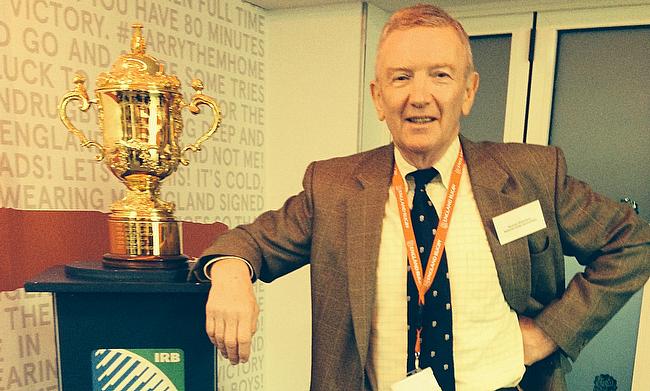 Almost two weeks ago, it was announced that John Inverdale would be replacing Norman Robertson as the NCA’s new chairman.

Following on from our chat with John which you can read here, we caught up with Norman to look back on his 11-year tenure and he discusses his hopes for the National Leagues moving forward.

Q: So Norman, it has been a strange time for everyone but there has of course been change at the top of the NCA. First and foremost, how have things been for you over this lockdown period?

NR: Yes, it has been strange for all of us! Like most other people, I have had a good clear out of both paperwork and general bits and pieces we have accumulate over the years!

The golf courses have been opened up so I have played a few rounds of golf and I am looking forward to when Wales lift their lockdown measures so I can go sailing in Wales!

I have also worked closely with John [Inverdale] and Alan [McCreadie] to ensure a smooth transition, together with participating in numerous RFU Virtual meetings.

Q: May I say on behalf of ncarugby.com, we’d like to congratulate you on your 11-year tenure as chairman of the NCA, Norman. What were your feelings like when you ‘virtually’ handed over the baton to John Inverdale?

NR: Where has 11 years gone! It has certainly flown by.

My feelings on handing over are that the time is right and I agree with UK sports requirements, that anyone serving on a governing body of an international sport should be limited to nine years from now on. This will ensure fresh blood and thinking.

Q: Obviously, you can now sit back and reflect on your time as chairman Norman, but how and why did you become chairman back in 2009?

NR: I had served on the NCA Executive for a number of years under various Chairs, but when the late Sir Hal Miller decided to retire, I was proposed by the Exec to take the Chair which the clubs endorsed.

To take over from Hal was an honour because he was a wonderful character and a very intelligent man.

Q: So, how do you reflect on the last decade or so then, what changes have you witnessed and what still needs to be done to help increase the profile of the community game even further?…Just the three questions in one!

NR: The quality of the game on the pitch has been a joy to watch. The players have become even more dedicated to fitness, and together with the skill level, it has increased in leaps and bounds.

The majority of clubs have also invested in facilities, although not all. I, like John, think there should be minimum entry criteria for clubs to gain entry into the National Leagues because after all, we are in the top 72 clubs out of approximately 1,700 in the RFU.

We have had a few clubs over the years concentrate on paying players rather than investing in the whole product and I think if that was done more, it would give both players and spectators a comfortable experience.

Q: Any standout moments which made you proud to represent the NCA?

NR: The NCA representative team, England Counties, are a credit to us and the game, in the quality of their play and the way they conduct themselves as ambassadors for English rugby.

All the best to the England Counties guys in Georgia this afternoon.

I have seen that on a couple of tours I have been on with them and they represent the shirt so well.

Q: How excited are you to see what John can do as chairman of the NCA? Is he the right man to continue your good work?

NR: I have known John for a few years, primarily through my visits to watch Esher play and also LSE NCA meetings.

John has never been shy in saying what he regards as problems within the game, but more importantly, he has always suggested how we should address these with constructive criticism.

Having worked closely with him over the last few months, I have benefitted from his wise input into various issues that I have had to deal with.

I am confident that, like myself, he will listen to all and then make decisions which will benefit the NCA clubs.

Q: How important, during this time more than ever, is it for everyone to show their support for their local clubs because as Bill Sweeney has said, they are the lifeblood of our game?

I go around our clubs and I am impressed by the numbers of Minis and Juniors that clubs attract on Sunday’s.

I also hear that it is sometimes a struggle to fulfil fixtures in lower teams because of lack of numbers, so our challenge is to increase the percentage of M&Js who progress into the senior club rugby environment.

The M&Js are also a great source for administrators. Always remember, you don’t even have had to play rugby to be a good Secretary, Treasurer, fundraiser, committee person or chairperson.

I would also like us to encourage Ladies and Girls to take up our game and they can give our clubs the true family feeling which will be beneficial to us all.

The RFU Council does come in for criticism, but I would ask you all to remember they are YOUR representatives. Weaken the Council at your peril, so speak to them with not only your fears, but also praise for what you think is good in our game and what we can build on. We, the clubs, are the representatives and the shareholders of the game. We must remember that.

Having been on the inside for 11 years, I have seen the tremendous effort that the Council members put into ensuring the future of rugby.

Q: And just finally Norman, you have also been awarded privileged membership of the RFU so how proud of a moment was that and does that highlight the work you have done over the years?

NR: To have been awarded privilege membership of the RFU is an honour which I am humbled to receive and to have held the position of chairman of the NCA for over a decade is one I have cherished and enjoyed immensely.