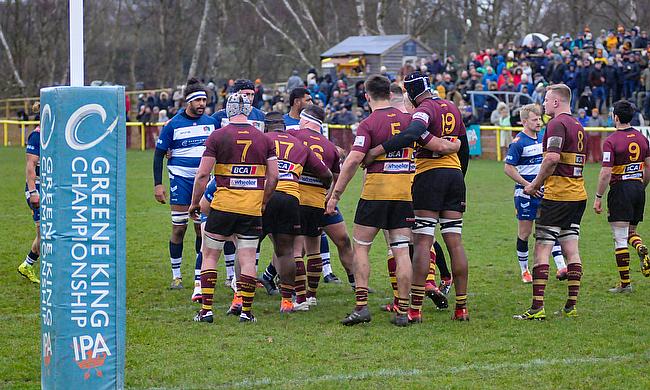 “I used to get on the back of a driving maul if I could!” says Ampthill & District’s Sam Hanks, as he recalls his early experiences of the National Leagues. Photo Credit: Nick Meredith

After finishing college, the centre begun his rise through the ranks with Blaydon before swapping the North-East for the West Country as he joined Cinderford. Hanks moved back to Bristol and spent three seasons at Dockham Road, but in his final year, the Foresters suffered relegation from National One. “When Cindy went down, I was gutted about that because I had a lot of mates there. There was about five of us in car who would travel to Cinderford from Bristol so we did that three times a week for around about three years. I had a great time there.”

These days, relegation and disappointment seem a distant memory for Hanks. His ambitions are far greater, which is in parallel with the aims of Ampthill. Since the centre moved to Dillingham Park in 2016, the A’s have constantly improved and the club’s dreams were realised last season after gaining promotion to the Championship.

“I got the shout from Ampthill to come over during their second year in National One. The club were shocking quite a few teams at that level and I came across and I wasn’t sure what to make of it, but Ampthill started to steamroller everyone. We had been banging on the door so to get promotion was unbelievable. Things just came together and we picked up results where previously, we’d fallen short. We call it the ‘Ampthill Way.’ Once the machine goes, not many teams will stop it!”

When it came to moving to Ampthill, Hanks openly admits he didn’t know where the club were based but he quickly realised what the Bedfordshire outfit were trying to achieve. With internationals such as James Pritchard featuring alongside a strong contingent of Tongan stars, Hanks knew the bar had been raised.

Our build-up to the new season continues as we spoke to @AmpthillRufc signing @tongauiha about his career and the decision to move into National League rugby #Nat1 pic.twitter.com/EPnp9j9Rrv

“The first thing I thought was that they had a bloody good forward pack!” says Hanks, when asked about the Ampthill squad.

“Half the Tongan World Cup team is in there! We’ve had the likes of Maama Molitka, Aleki Lutui, Paino [Hehea] and Soane Tonga’uiha etc! It is incredible! They probably have a combined age of about 400, but those boys keep going for ages and they set up the platform for us backs to finish it off! I don’t know how they do it! It’s quite something to see the guys just get on with it and not moan about things. They just set an example.”

It isn’t just about the players involved which has set the tone for Hanks. Over the past four years, he has been coached by Mark Lavery and Paul Turner – who have guided the A’s up the rugby ladder – and this season, Ampthill added the expertise of Mouritz Botha, Dave Ward and Darryl Veenendall.

“The club brought in Mouritz and his detail is exceptional,” adds Hanks. “You have got Dave and Darryl as well and these are boys who have played at the top level for many years. That showed me that analysis and watching stuff is very key in the Championship because you can pick up a lot of things they have highlighted. We’d be going into games knowing how we could beat teams and from watching the tapes and the boys implementing it, it has worked. The professionalism is a lot different to anything I have experienced. It is part of what makes this club special.”

The journey for Ampthill is certainly a story worth reading and the ink is now dry on their latest chapter following the early conclusion of the Championship season. Last month, the RFU announced the suspension of the campaign due to the coronavirus pandemic and this week, English rugby’s governing body confirmed that promotion and relegation from the second tier would still stand.

It means Ampthill – who finished in fifth place following standout victories against the likes of Doncaster Knights and Bedford Blues – will consolidate and continue building towards the 2020/21 campaign, despite the disappointment of cutting this term short.

Following the early end of the rugby season in England as a result of COVID-19, The Rugby Football Union (RFU) is today announcing the final league positions for the Greene King IPA Championship, Tyrrells Premier 15s and men’s and women’s community game.

“I would say there were a few boys that were probably going to have a good run towards the end of the season and didn’t get that run they wanted to,” says Hanks.

“The other thing is that we got through the games and by that, I mean we had played Newcastle [Falcons] away, Ealing [Trailfinders] away – those sorts of teams. We wanted them to come to our patch and we wanted to give them a go to see what we could really do.

“We put in an unofficial target of wanting to be the highest-finishing newly-promoted team in the Championship. That was the goal and we took it week by week. We had a rough start to the year, but we found our feet.

“It is disappointing because it was my first year and I wanted to make the most of the opportunity, but you do have to accept the situation we are in.”

When Ampthill clinched promotion to the Championship 12 months ago, the national press focused on the uniqueness of the club compared to traditional teams.

At most stadiums, the players would enter and exit the pitch via a tunnel, but at Dillingham Park, you have to walk down a path and through the woods before reaching the 1st XV track. Next season, the Ampthill faithful will be perched on top of their hillside soaking up another year of second tier rugby, which will include the visit of current European champions, Saracens.

“If you came to the clubhouse, you would think ‘surely, we are not playing on that?!’” says Hanks. “We’d say’ no, no, no. The pitch is round the back.’ You then take this path through what I describe as a forest, and they have cut a square in it and put a rugby pitch in it.

“It is our thing and we use it! You buy into it. I think the biggest mistake teams have made in the past when we have played them at home is if they stay out at half-time, you know the game is finished. They aren’t keen on that walk back!”

Hanks is speaking to us over the phone as he, like the rest of the UK, remain in self-isolation due to Covid-19. If and when the campaign does get underway next season, Ampthill will set new goals and new targets after a successful maiden year in the Championship.

With club’s in the second division ploughing money into promotion hopes, Ampthill are still a part-time side who train three times a week. The gulf is there between themselves and some of the other teams, but as Hanks admits, it is part and parcel of what makes the A’s a fascinating story.

“One of the lads is a roofer here,” continues Hanks. “He gets up, bangs his roof up, goes to the gym and then he is at training. He grafts all day then it is straight to Ampthill. It is a different world for us when you compare it to some of the other Championship teams.

“We’ve got school teachers, engineers and builders etc! Some lads are from London and work in London so they get the one-hour train to the club for each session and go back again. There are lads from Bedford who go to work in London and then they come straight to training after a full day of graft.

“All of these boys are holding down full-time jobs but are coming to training, going to the gym and trying to keep up with analysis. Credit to them.”