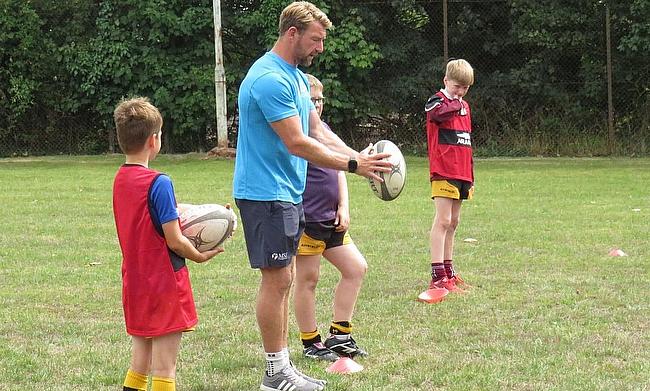 Former Exeter Chief Matt Jess discusses this weekend’s South West Beach Rugby festival which aims to raise awareness for mental health + he talks about his transition out of professional rugby, representing Taunton and his new venture with Cornish Pirates.

Matt Jess knows it is important to talk to others.

If someone is interested in how he dealt with the transition from professional rugby into everyday ‘working life’, the former Exeter Chief is more than happy to share his experiences. He recognises the need to be open.

After an indifferent period of weather, the forecast for Devon this weekend is set to be ideal as Jess prepares for a couple of days at the beach. He says the seaside is one of his most enjoyable places to visit, but it is also a location which became pertinent to him when he left Sandy Park in 2017.

Whether he went to the beach by himself or with his family, Jess admits he was struggling after his professional rugby career came to an end, but now this part of his life has made him focus on helping others in similar situations. Across this Saturday and Sunday, Jess will be launching South West Beach Rugby in Exmouth – a festival of touch rugby which aims to raise money and awareness for mental health.

The calm before the FUN! Exmouth Beach you are simply beautiful! ☀️🏖😉🏉🏆🏅🍻 pic.twitter.com/TY3NUT2Ymy

“The reasons we are doing this for mental health is because, when I finished at the Chiefs and transitioned from a player to a coach, I found it quite difficult,” Jess said.

“I am quite open about it. The transition from being a professional for a long time, where you have a schedule, to then not knowing the next direction you are going to head in is quite difficult.

“It puts a massive strain on yourself, but also your family. You start to think to yourself ‘How do I get over these things?’ When I was not feeling at my best, I would go down to the beach and that made me clear my mind. That made me think of combining the sport I love with the place I love going to, so I decided to organise a tournament to raise money for three fantastic charities.”

The charities which have been chosen by Jess are the RNLI (Royal National Lifeboat Institution), Restart Rugby and The Royal Marines Charity. Despite it being a rugby festival this weekend, Jess was keen to stress the main message is all about inclusion and helping everyone, not just people who have been or are still involved in the game.

He added: “I want people to understand what mental health is and if people are struggling, go out and talk to somebody. I know it takes a lot of encouragement to go and do it, but if I can be that sort of beacon to say that I struggled but I did manage to speak to people about it, then hopefully that can help others because you can help save lives.”

Support for Jess and his initiative has come from across rugby. Former teammate Gareth Steenson has played his part in helping with the festival whilst current England stars Ben Moon and Jack Nowell have posted messages on social media. Even ex-Wales captain Sam Warburton has helped boost the profile of an event which has become the latest project in Jess’ life.

Alongside his flourishing MSJ Coaching sessions, which he has been running for two years, Jess’ playing days haven’t fully come to an end just yet. Last season, the winger ended the campaign in National Two South with Taunton Titans after linking up Tony Yapp and Chris Browne once again.

“I really enjoyed the backend of last year where I was with a club which was pushing in the right direction,” said Jess. “Taunton have great coaches like Tony and Chris Browne who I know so I was coming into an environment I was comfortable with.

“I love the enjoyment and the competitive side of the game and playing in the National Leagues is so competitive. The teams I played against like Barnes and Worthing Raiders etc, those players you are up against are competitive players!

“It is not too dissimilar to the top level and the only clear difference is the pace of the game. The physicality is there! I remember getting tackled last year and I was thinking whether or not I wanted the ball again after getting hit hard!”

Even though he experienced some hard knocks, Jess was also able to show his quality as he scored five tries to help the Titans finish another strong campaign in fifth place. There is no doubt Taunton possess a squad which is full of talent and Jess was quick to point out this is a young team which is developing.

TRY! A score on debut for Matt Jess as the flying winger puts Taunton 12-7 up – conversion missedhttps://t.co/3eFjGwg4j0

Former Exeter Chief Julian Salvi has also been involved at the Commsplus Stadium this season and earlier in the campaign, he emphasised how important the National Leagues are in terms of helping young players learn the game and it is a sentiment which Jess echoes.

“These teams all buy into the National Leagues and grassroots rugby,” Jess added. “You are getting experienced coaches like Yappy and Chris Browne where they have come out of playing professional rugby and they are using that professionalism and putting it into grassroots rugby which I think is great.

“That just keeps that competitive nature going, but also you are going to push those individual players. It allows those young players to show that they could play at Championship standard or even in the Premiership, so I think the National Leagues are great for the game.  It is a breeding ground to learn the game.”

Jess has not ruled out the possibility of representing Taunton again as he aims to be part of their pre-season schedule in order to maintain his fitness, but heading into 2019/20, his priorities will be elsewhere.

At the start of June, Jess was announced as the assistant coach of Championship side Cornish Pirates where he will work alongside Gavin Cattle and Alan Paver as well as new Director of Rugby Chris Sterling.

Jess began his playing career in Cornwall and spent some time with his old club last season before taking on an official role for the upcoming campaign.

Under the headship of Director of Rugby Chris Stirling, the Cornish Pirates can confirm that Matt Jess is joining the club’s coaching team as an Assistant Coach.

Pirates ended last year in fifth place, but with an exciting squad which has also been added to, Jess has high hopes for the club as he begins his latest role within rugby.

“I am really excited,” said Jess. “We have been in pre-season now for two or three weeks. The first week was more of a team building exercise and the last couple of weeks has been about putting in the building blocks in terms of how the guys are looking to play this year.

“We have also got Chris Sterling coming in effectively steering the ship this season but adding his experience to the coaching of Gavin and Paves, I think the future seems so much rosier for the Cornish Pirates.

“Effectively for us, I think it is about competing next season and I think Gavin and Paves will be in full agreement with me. You are in a league for a reason and that is to challenge, and I think the Cornish Pirates will challenge.

“I am not going to put a number on where we could finish, but this year, I would like to see us really challenging the likes of Newcastle Falcons that have come down. If players have that in their heads that they are going to challenge as an individual and as a team, everyone pushes in the right direction. If that happens, the world can be your oyster.”