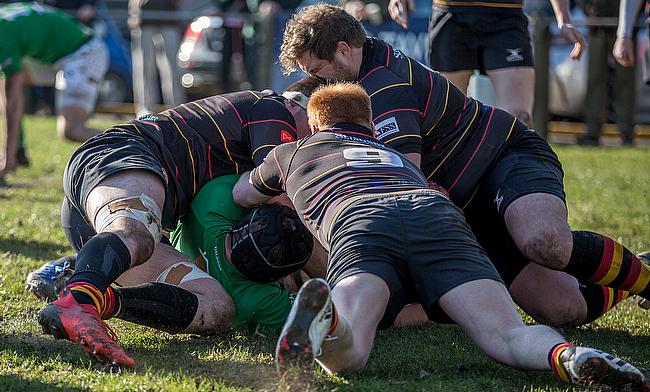 Father of Montpellier star is beginning a new adventure with Harrogate in National Two North, plus he also talks about Zach’s time in France and what might be next for the back-rower. Photo credit:(Ro Burridge)

After seeing his son become a league champion in France, Gary Mercer has certainly savoured the last few weeks.

Visit the Instagram profile of Zach Mercer and his most recent post explains why it has been a special period for the family: “Safe to say this has been the best month of my life.”

From a rugby perspective, winning the Top 14 in a phenomenal debut season with Montpellier is the stuff of dreams while off the field, the former Bath star completed his fairytale by marrying partner Emily.

“I am over the moon for the boy,” Mercer Snr tells National League Rugby. “He has got such a good family support behind him but in terms of his rugby, fair-dos to him. I am so proud of his efforts to go away from his country, go somewhere different, learn a new language, and play in a different league.

“A lot of people were surprised he left at 24 years old to go and play in the Top 14. Normally boys get to 32, or 33, retire from Test rugby and go and play in France. He has just turned it all around the other way.”

The recent memories created by his son has left Mercer excited about what the future holds, but on an individual note, the ex-Leeds Rhinos captain has every reason to be enthusiastic after beginning his new role with National Two North outfit Harrogate.

The 56-year-old is also currently head of rugby at Ashville College – who are one of Harrogate’s main sponsors – and the school is situated just three miles from the club’s ground.

Mercer’s appointment has added to the new-look feel around Rudding Lane with Martyn Wood becoming the Director of Rugby alongside head coach Sam Fox.

“To be fair, it was unexpected,” Mercer says. “I just had a phone call with Martyn and he offered me the position as defence coach.

“I think Harrogate is a great club. I have only been three weeks in the job as it is and I have had five or six sessions with the boys and they have been great. It is a great challenge.

“We have got a clean sheet with the coaches and what we want to try and do is get an appetite to wear that shirt and not just be given the shirt because you turn up on a Tuesday and Thursday so we need competition for places so it is exciting times.”

Coaching at different levels in the rugby pyramid is something which Mercer relishes. In 2016, the Kiwi was in charge of then National Two side Biggar up in Scotland.

He has also worked with the SRU Academy and the former Warrington star revealed he is still commuting from Glasgow each week in order to pass on his knowledge to those at Harrogate.

“I love grassroots rugby,” Mercer says. “When I was up in Scotland where I was coaching with the [Glasgow] Warriors, after I finished there, I ended up coaching Biggar. I coached them for three seasons and had them promoted after the second season.

“What you have got to appreciate is these are men that go to work all day and they are coming in on a Tuesday and a Thursday. They turn up to training so you have to make it enjoyable so they enjoy their rugby come Saturday. That was a big focus of mine when I was with Biggar.

“What I have said to Martyn Wood at Harrogate is you’ll get 100 per cent of Gary Mercer. I still live in in Glasgow so it is a big commitment on my part, but it’s obviously an opportunity for me to get back into grassroots rugby and one I want to embrace.”

On their return to level four last season, Harrogate were decimated by injuries and finished bottom of the pile with only three victories to their name.

Mercer understands his remit is to tighten up the defence at Rudding Lane and his extensive rugby league background could stop the Yorkshire outfit from leaking tries.

Higher up the chain, Mercer’s old teammate at Leeds Rhinos, Kevin Sinfield, played an integral part in Leicester Tigers clinching the Gallagher Premiership title with outstanding periods of defence an underlying theme throughout their superb campaign.

Shaun Edwards, who the former New Zealand international came up against in the 1990 Challenge Cup final, is arguably the best defence coach in the business and he has helped transform France into one of the favourites for next year’s World Cup.

And Mercer believes getting the basics right will go along way to improving any side.

“Defence is personal and that is my remit,” Mercer says. “It is pretty simple stuff really. When I played, I wasn’t one of the greatest players who played the game in Super League but one thing I had was I emphasised a lot on work rate. If we can work on that, I think it will go a long way for us this season.

“I think that is what the league coaches do and bring to the game of rugby union. When you look at rugby union, it is a totally different game to rugby league. It is more technical, it is more tactical and sometimes you go away from work rate. I think work ethic within the game is something we definitely bring as coaches and when you see Kevin go down to Leicester, they are seeing a different breed of person.

“That is someone who has been at the top of his game for so long and it is because of his work rate, his desire to succeed and all those little small things that make a big thing happen.”

Mercer’s connection with Leeds and the county of Yorkshire runs deep. In rugby league, he also played for Bradford, Halifax and Castleford whilst in union, he had a brief coaching spell with Yorkshire Carnegie back in 2014.

He now enters National Two North with Harrogate – a division which includes no less than eight teams from the county – with Hull flying the flag for the region last term after gaining an historic promotion to National One.

“I think it is important that the Yorkshire clubs do well and we have a strong team which is represented in National One and above whether it is Leeds Tykes or Hull or even your likes of Rotherham Titans or Hull Ionians under Graham Steadman who I know well,” Mercer adds.

“Steady is doing a great job there so we need to get those sorts of clubs again featuring higher up. It is exciting to have so many Yorkshire clubs in our league, though!”

Over the next few weeks, Mercer will want to implement his ideas in pre-season before the campaign officially begins for Harrogate on September 3rd when they face Rotherham Titans.

And whilst constructing his own plans might be easy enough for Mercer, for son Zach, it isn’t that straightforward.

After a stunning campaign with Montpellier, which included a Player of the Match performance against Castres in the Top 14 final and a place in the Fans’ Team of the Season, Mercer Jnr knows decisions need to be made.

Last month, The Times’ Will Kelleher reported the 25-year-old had told England boss Eddie Jones he was staying in France and whilst speaking to TRU, Mercer Snr hinted that his son is in negotiations to extend his stay with Montpellier.

Right now, the rules mean an England call-up is impossible because Mercer is playing his rugby outside of the country, but his eye-catching displays have led to calls for him to return home in order to reignite his international career.

Hi Eddie, I’m English and my name is Zach Mercer, I’ve just absolutely dominated and got Man of the Match in the French Top 14 Final! Gregor don’t even bother to call me…. pic.twitter.com/uhWl7WiyoM

The destructive back-rower revealed in March that Jones had been in contact with him and the England head coach has reportedly set a deadline for Mercer to come back to the Premiership if he is to be considered for selection.

“I think he has gone away to the Top 14 and he has worked on his physicality of the game,” Mercer Snr adds. “His defensive work over in France has been phenomenal. He has been by far the in-form player.

“I know he has aspirations to play for England again. He is obviously at the time now where he has to make a decision. I would think if anything he will stay another year in France with Montpellier.

“It is up to Zach to back himself, play well this season, keep up there with Eddie Jones, keep in touch with him like he has been doing and see what happens from there. He will have all of our support whatever he decides to do.”

If the last month or so for the Mercer family has been full of special moments and memories which will last a lifetime, the future could be one of new and exciting opportunities, especially across the rugby sphere.

Keep your eyes peeled for announcements about The National League Rugby Review Show over the next couple of weeks!