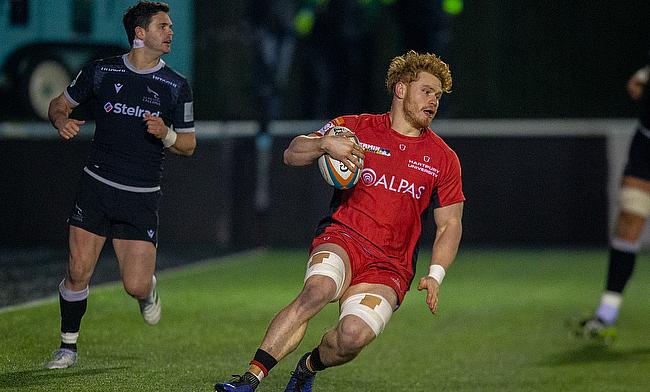 Gloucester’s dynamic Number 8 reflects on his journey to Kingsholm and why stepping down into the National Leagues reignited his love for the game. Photo Credit: LCN Images

A grin appears across Seb Nagle-Taylor’s face as he recalls his journey to the Gallagher Premiership.

Like most things at the moment, our conversation is conducted over Zoom and sometimes that means it is hard to gauge an individual’s personality. However, this doesn’t apply to the 26-year-old as his passion for discussing his path to the top-flight is evident as soon as the topic is raised.

National One, the third tier of English rugby, has continued to provide a platform for ambitious players to take their next steps in the game and it was at Rotherham Titans where Nagle-Taylor excelled.

When he made his try-scoring debut for Gloucester in the European Champions Cup against Lyon last month, he realises that moment might not have been possible without the experience he gained lower down the rugby pyramid.

“I did have to pinch myself a bit,” Nagle-Taylor says. “To have that sink in after the game was amazing. It is an incredible competition to play, score, and even start in a game like that. It was always something that I have wanted to do so it took a while to sink in!

“You do kind of look back and think of the journey you have been on, but I’d say places like Rotherham were massive for my career and where I have got to now. It gave me a different appreciation of rugby.”

For Nagle-Taylor, making his first senior appearance for the Cherry and Whites marked a destination he didn’t realise existed when he began playing rugby at the age of nine: “I grew up in Hong Kong and to be honest until I moved to England, I didn’t even know professional rugby was a pathway,” he says. “I was quite young and I lived in Hong Kong till I was in Year 7 or Year 8, but it was only when I came over to school in England that I found out you could do that so when I found out it was possible, I was like ‘this is what I want to do.’”

Nagle-Taylor describes himself as a “dynamic ball-carrier” as well as “someone who takes pride in working hard” and both attributes have enabled the powerful Number 8 to achieve his goal, but his journey to Gloucester hasn’t been plain sailing.

After plying his trade in the Championship across three different clubs, Nagle-Taylor found himself at a crossroads. In 2018, only Rotherham made an approach for his services and in his heart of hearts, he knew stepping down a level wasn’t part of the script.

However, the route he eventually decided to take has been vindicated after signing a Premiership contract just before Christmas.

“I did get a bit frustrated as my time in the Championship wore on,” Nagle-Taylor says. “I just got stuck in a place where I wasn’t playing. You can get into a place where you can be in a negative headspace and you can get frustrated with the circumstances you are in.

“You are still doing something you love to a certain degree, but when I went to Rotherham, I basically had no other option. I got there and I was a bit sceptical at first. I thought I didn’t want to be playing in National One, but I had to think positively that going into National One would bring me some opportunities. I was incredibly fortunate to play as much as I did and I think I re-found my love for rugby itself at Rotherham.”

In the 2018-19 season, Nagle-Taylor scored 21 tries for the Titans – the second-highest total in the division – and he was unsurprisingly named as the club’s Players’ Player and Supporters’ Player of the Year.

His ‘seize the moment mentality’ continued when Nagle-Taylor joined Hartpury at the beginning of the 2019-20 campaign as, once again, there were limited options for the forward to choose from despite his scintillating form for Rotherham.

What a season for @seb_nt The No.8 was outstanding for @RotherhamRugby and a credit to the club. His #Nat1 form has been rewarded with a move to Championship side Hartpury for 2019/20 #Top48 pic.twitter.com/QZL9tguMgE

Last term, he made 19 appearances in the Championship for a side known for its rich history of developing talented players and his time at Hartpury presented Nagle-Taylor with a chance he had been working towards.

He was initially loaned out to Gloucester in November to provide injury cover for the Cherry and Whites, but rather than being wide-eyed and starstruck by his surroundings, the back-row grabbed the opportunity with both hands.

“Obviously being in the position with Hartpury where essentially we have been in pre-season since June [due to the pandemic], this chance to play came around,” he says. “I got a call from Skivs [George Skvington] and the coaches at Hartpury at 8pm the night before a Monday training session saying that they wanted me to come in as injury cover.

“Personally, I just assumed they wanted me there to make up the numbers, but in my head, I took that as an opportunity to show them what I can do. My motivation was to try and win a contract so that is what I went in with. It has been a bit of an up and down, tumultuous journey so to eventually get that and sign with a club like Gloucester was amazing. I can’t really put it into words how I felt.”

Before the announcement of his contract for the 2021/22 season, Nagle-Taylor was thrust into Gloucester’s European opener against Lyon and on an afternoon where the Cherry and Whites were on the wrong end of a 55-10 thrashing, their new recruit in the back row was one of the club’s shining lights at the Matmut Stadium.

Nagle-Taylor also came off the bench in “one of the best wins he has experienced” when Gloucester snatched a late victory over Ulster at Kingsholm and before the Premiership’s recent two-week break, he was involved in fixtures against Exeter Chiefs, Sale Sharks and Newcastle Falcons.

The Cherry and Whites resume their domestic duties on Saturday when they host Northampton Saints, but Skivington’s side come into the game on the back of four straight league defeats, and they are currently rooted to the foot of the table.

However, Nagle-Taylor feels their recent results don’t necessarily tell the full story: “You can see it in our games that we just need a few things to fall our way. We can be dominant and right there and I think in the last few games, it has been the last 20 minutes where we have made a few mistakes and things just haven’t gone our way.

“This team has so much ability. Everything is there, it is just a case of all those pieces coming together and I know that can be a cliché, but I say that sincerely. I do think that is evident to see as well.”

In terms of Nagle Taylor, he is acutely aware the learning process also continues for himself. Over the last month, he has enjoyed picking the brains of the coaches at Kingsholm as well as his fellow teammates, but there is also the realisation of how fortunate he feels to now be in this position.

“I am in quite close proximity to people who aren’t playing at the moment because the pandemic has pretty much stopped all rugby,” Nagle-Taylor adds. “If I didn’t get this opportunity at Gloucester, I wouldn’t be playing. I would have been alongside the boys in the Championship still doing pre-season and the university lads. Their whole university season has now been cancelled so I massively feel for those guys. Having this opportunity to play rugby is massive and it is hard to overstate how much that means to you.”

Even if the world is in an uncertain place right now, Nagle-Taylor can look to the future with some reassurances for arguably the first time in his short career. A full-time Premiership contract will be activated at the end of this season and as he continues to showcase his talents at the top-level, the dynamic back-row will never forget the journey he has been on to achieve his dream.