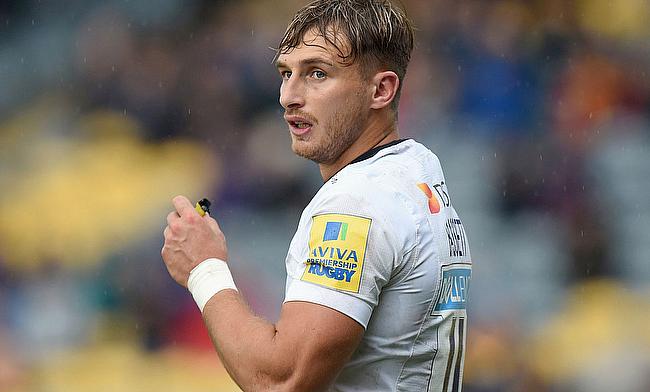 The former Ampthill and District player chatted to Ali Stokes ahead of the new Gallagher Premiership season with Wasps.

While many of the players that frequented the Premiership fixture launch at the BT Tower last Friday spoke of summers loaded with extra rehab sessions and a steely mental fortitude in the face of adversity, one man still left standing after the 2017/18 season was Wasps wing Josh Bassett.

The 26-year-old, who began his career at Dillingham Park with Ampthill,  relished a rather more conventional off-season, enjoying a good break before returning to his club for the dreaded pre-season fitness regime.

“Yeah really good,” Bassett reflected. “Five weeks to relax and look over the season that’s just gone. I got to spend some time with the family, which has been amazing. But I was also really looking forward to getting back in.

Bassett, who rose through the youth teams at Ampthill before joining Bedford Blues in 2011, recommitted himself to Wasps last season following widespread reports that the winger was hunting more regular game time via a move to Northampton Saints. With the likes of Christian Wade and Elliot Daly featuring as regular starters on each wing last season, Bassett has clearly been chomping at the bit to return to camp to prove to Dai Young that he is deserving of a recurring role in Wasps’ starting lineup.

“We’ve been back in now for two weeks working hard, it’s exciting,” Bassett said. “Obviously there have been changes so it’s really been about tweaking little things and seeing what we can work on for next year. We’ve been working on what we did last year too, slowly building.

“But the main part of pre-season obviously is to get yourself right physically to start with, working on your skillsets and also just enjoying it, enjoy working hard.”

When asked whether there were any key areas Bassett had identified as dormant weak spots in his game, that could be improved upon and conceivably aid in his progression to a nailed down starting role, the flyer spoke only of improving his skill set as a whole, fixing to become a complete, well-rounded wing.

“As a rugby player, you can never be happy with where you are physically and with your skillset,” he explained. “Trying to improve yourself in every aspect because that’s what is going to make you better, it’s all about chasing those one percent’s in every area. They all add up towards improving your potential.”

Bassett will be hoping to enjoy a start in Wasps’ first game of the season, in which the Coventry-based outfit will take the brief trip down the M40 to Sixways Stadium, where Worcester Warriors will host their closest rivals.

Wasps’ options out wide next season may boast the likes of the aforementioned wing trio, in addition to a star-studded half-back pairing of Dan Robson and Lima Sopoaga, to name a few. But the area Dai Young will be most intent to advance is in the work done up front, earning the hard yards. Their backline may be sharp enough to split a hair, but their pack struggled with a widely described ‘soft underbelly’.

With James Haskell, Matt Symons, Guy Thompson and Marty Moore all departing, the Midlands side will be hoping their new signings will have enough to form a pack capable of trading blow for blow with the likes of Exeter Chiefs and Saracens.