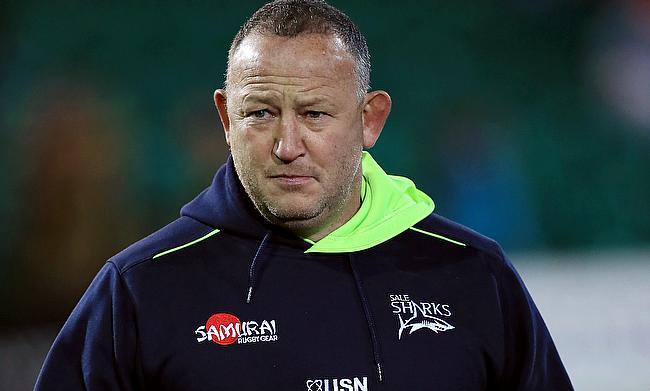 Director of Rugby Steve Diamond insists the lower tiers are a key part of player development at Sale Sharks.

Things are on the up at the AJ Bell Stadium.

On Saturday night, Sale Sharks secured a thumping win in the European Challenge Cup and their qualification for the knockout stages is almost guaranteed.

A convincing 50-24 victory over Bordeaux Begles in France means the Sharks maintained their perfect record in Pool 3, but also their momentum is continuing to build.

It’s starting to look a lot like Christmas ? as our Sale Sharks light up the pitch and deliver an early present https://t.co/4G2vtc1QTW

Since the first European window, Sale have lost on just two occasions and in that time, there have been some standout individual performances.

Chris Ashton, Denny Solomona and Byron McGuigan have grabbed the headlines in recent weeks, but Sale’s young stars have also shone as Director of Rugby Steve Diamond continues to hand opportunities to some of the club’s emerging talent.

The Curry twins [Tom and Ben] as well as the James brothers [Sam and Luke] are past examples of Sale willing to promote youth and this season, it has certainly been a plus point for the club as a whole.

“For anybody who knows what we do at Sale, we have a massive development pathway and I always give lads opportunities,” Diamond said. “If they are good enough, they are old enough in my book. Arron Reed, Kieran Wilkinson, Cameron Redpath, to name just three, are outstanding players meaning they will always get a chance.”

But, it is not just through the academy where players can gain opportunities to showcase their abilities for Sale.

The club’s link with Sale FC has continued to grow and this season, the likes of Kieran Wilkinson, Arron Reed, Connor Doherty, Nic Dolly and Matt Sturgess have all appeared in National One.

Added to this, Gus Warr and Sam Dugdale have both gained game time at National Two North side Fylde during the the campaign.

Congratulations to our 8 England U20 Six Nations squad members! ?

“One of the flaws in the academy system is kids are just playing against their own age groups all the time while Sale FC and the National Leagues offers them an opportunity to play against men,” Diamond admitted. “They are mature players who have been playing for 10-15 years and it is a really good learning process for the younger players.”

Diamond is not the first high profile name in the sport to praise the National Leagues with World Rugby Chairman Bill Beaumont highlighting how this level of rugby can benefit the game across the board.

In terms of results, Sale FC currently sit 11th in National One and will be aiming to end a three-game losing streak when they take on Ampthill and District this weekend while the Sharks also occupy the same position in the Gallagher Premiership.

Steve Diamond’s men are embroiled in a remarkable fight in the bottom half of the table, but he feels if his side can continue to produce encouraging performances between now and the end of the year, Sale can kick on heading into 2019.

He added: “It is a good competition the Challenge Cup and we are top at the group at the minute. They [Bordeaux] are doing well in the French league put we just want good performances and it hopefully should leave us in a good position going into the last two pool stage matches.

“We have got something out of every game in the last few fixtures. We had a poor start to the season, but we seemed to have rectified that so hopefully it can be a big momentum builder for us.”

Sale will be aiming to wrap up qualification for the next round of the Challenge Cup when they host Bordeaux in the reverse fixture on Saturday afternoon.

Steve Diamond was speaking at a ‘Cash for Kids’ Mission Christmas event in Sale as the club helped to support the drive to make sure that disadvantaged children in Manchester have presents to open at Christmas.

Anyone wishing to donate gifts to Cash for Kids’ Mission Christmas appeal this year can do so through designated community drop off points, with more than 300 drop offs across the country.