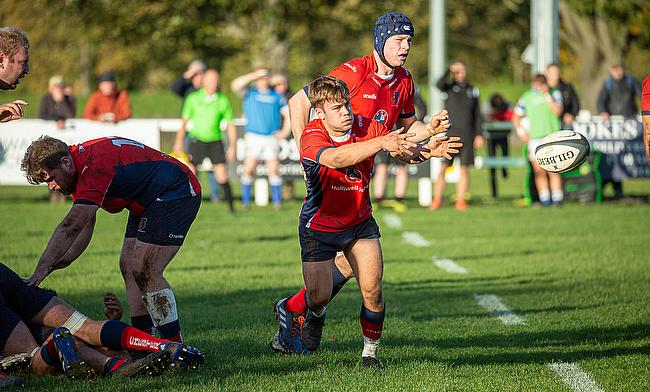 The 20-year-old scrum-half had his contract cancelled at Worcester Warriors when the club entered administration but now he is back enjoying his rugby again in National Two North. (Photo Credit: John and Barbara Austin)

“I have only been there for just over a week but everyone has been unbelievable and opened their arms to me,” Ollie Wynn says.

He is discussing his recent decision to link up with National Two North side Chester after the 20-year-old scrum-half was left without a contract following the demise of Premiership club Worcester Warriors.

Wynn, who featured heavily in the Warriors’ triumphant Premiership Rugby Cup campaign in 2021-22, has already impressed in the No.9 shirt at Hare Lane, scoring a lovely solo try on his debut against Tynedale last weekend. This superb start also earned him National Two North Player of the Week for Round Seven.

He has certainly hit the ground running in Cheshire, even if preparing to face Preston Grasshoppers this Saturday wasn’t at all on his radar when Worcester were lifting silverware.

Last month, Wynn actually represented the Midlands outfit in the Premiership Cup against Gloucester. Six days later, the club went into administration before being suspended and relegated from the top flight.

This finish from @TJRFC’s winger topped our ‘Play of the Week’ but there were also some corkers in Round 7.

The devastating news meant he decided to head back home to Whitchurch. From playing that night at Kingsholm, Wynn has now dropped down three levels in order to continue his rugby whilst also learning his trade as a bricklayer under the tutelage of one of his best friends.

“I am about a 25-minute drive from Chester so it is not too bad,” Wynn explains. “I grew up playing my rugby at Whitchurch and a lad who played at Whitchurch dropped me a message a couple of months ago. I didn’t really know what was going on and eventually Chester was the best option.

“I have got a good mate of mine who I grew up with who I am working with at the moment so I’m just basically labouring for him. I kind of thought I’d never do anything like that, but it has opened my eyes in that respect as well that learning a trade is not a bad way to go. What happened with Worcester, I wasn’t paid for two months so first of all, it was just to get a bit of money but now I am enjoying it.”

Making the best of an unthinkable situation is exactly what Wynn has done and having some security each day is something the youngster is not taking for granted.

“What has happened to me and everyone at Worcester is obviously not great,” reflects Wynn. “Rewind the clock a bit further [back from the Premiership Rugby Cup final], I played in every Prem Cup match last year. We won it and it was probably one of the highlights of my career. I was enjoying myself. I didn’t think it could get any better. You fast-forward two months where lads were not being paid and we were still training, there was so much uncertainty.”

Before the Warriors’ financial problems came to light, Wynn’s name might not have been well-known, but his emotional message on Twitter struck a core with many.

As Worcester’s issues started to rapidly unravel, the 20-year-old explained he had been left homeless after a house used by academy players was repossessed due to unpaid mortgage payments.

“I’ve got some certainty now,” Wynn says. “I’ve got some money coming in through my job. I’m playing some rugby which I really enjoy. I would say that two month/three-month period where we didn’t know what was going on was probably the worst of it. For me, I am only 20. I would almost rather be playing regular rugby and learning a trade than where I was a couple of months ago.”

With no roof over his head, Wynn moved in with England international Ollie Lawrence and he is one of a cluster of Worcester’s stars who have already secured a move to another Premiership club.

The centre has been joined at Bath by former Warriors skipper Ted Hill as well as Fergus Lee-Warner, Jamie Shillcock and Billy Searle while Wynn’s close friend, fly-half Fin Smith, is now at Northampton Saints.

“They need to be playing at the top level,” Wynn says. “You mention Northampton, Fin Smith has signed there. He was probably my closest friend at Worcester, so it is unbelievable to see where he is.

“Although he is my best mate, he’s quite an inspiration really for what he has done and what he has achieved in the last few years. I will be definitely getting down to watch a few of these boys when I can. It shows the rugby community does help other teams. I know there is the salary cap and stuff, but it is good to see the Worcester players valued by other clubs like that.

It is clear Wynn is delighted for his friends who have found pastures new but he constantly thinks about everyone involved at Worcester who were let down by their disgraced owners.

The scrum-half admits the statement from Colin Goldring and Jason Whittingham which effectively blamed the players and fans for the club’s free-fall was “upsetting” but now he hopes for a brighter future for the Warriors community.

“From my point of view, I felt like I was quite lucky. I am 20 years old, just starting out in my career whereas you have got some lads who have just bought houses, mortgages. Personally, I feel more for the boys who are in the 25 to 30 bracket where they have got other people to look after. It is not just themselves. It is not just the players, it is the staff too. We have all been hard done by, but there are a lot more people out there in the Worcester community which I feel for more than myself.

“I hope everyone has got light at the end of the tunnel because we were stuck in a dark tunnel for a while not knowing what was going on.”

There was some positive news on Thursday for everyone associated with Worcester after Steve Diamond launched a bid to save the Warriors. The Telegraph revealed the club’s former Director of Rugby is working on a bid to take over at Sixways alongside past shirt sponsor Adam Hewitt and a London-based investor.

#TOGETHER 6 weeks of graft for me is easy compared to 25 yrs of Cecil’s legacy pic.twitter.com/47cwY1zyjL

Wynn admitted he would love to move back to his “home from home” if Worcester were to be reborn, but for now his focus is on playing for Chester and seeing what opportunities may come his way.

The youngster isn’t shying away from the challenge of National League Rugby, though. Yes, his ambitions are to return to a Premiership club but he is soaking up the experience at Hare Lane and is determined to give it his all for however long he is part of Jan van Deventer’s squad.

“Playing for Chester, it makes me realise why I am in the sport and why I want to play at the highest level,” Wynn says.

“I have trained at a very high level for the last couple of years but I’ve not really played at the highest level so you don’t learn anything more than when you play so it is the best way to learn really. I am still young and hopefully there will be a lot ahead of me so that is why I wanted to get some game time really and Chester is not a bad level at all.

“The head coach at Chester, Jan, has been very, very good with me. He said if there is an offer there for you from a Premiership club perhaps, then they wouldn’t stand in my way which is massive to me because I couldn’t have joined a better club in the sense of I am playing regular rugby, it is close to home, and if I do get a big opportunity, they will understand.

“If anything came up in the future and I had the opportunity to help Chester out, then I would 100 per cent do that. How they have helped me in this situation, I would love to give back but I am just loving being part of it at the moment.”

A look to Round Eight…

Taking things up to National One, it is another big weekend at both ends of the table. Rams – who are the only other side in National League Rugby with a 100 per cent record to their name – host Birmingham Moseley whilst promotion rivals Rosslyn Park and Cambridge collide at The Rock.

Darlington Mowden Park v Leeds Tykes kicks off Round Eight under the Friday night lights with both sides looking to create some breathing space between themselves and the bottom three while two clubs in the drop zone – Hull and Taunton – meet in Yorkshire.

Back down to National Two East where Blackheath (1st) travel to Henley Hawks (3rd) with the top six sides separated by just three points while at the bottom, North Walsham entertain Westcliff in The National League Rugby Review Show’s Key Game.

There is also a similar theme in National Two West with the leading pair – Leicester Lions and Clifton – going head-to-head in the Midlands while the bottom two – Bournville and Barnstaple – meet at Avery Fields.